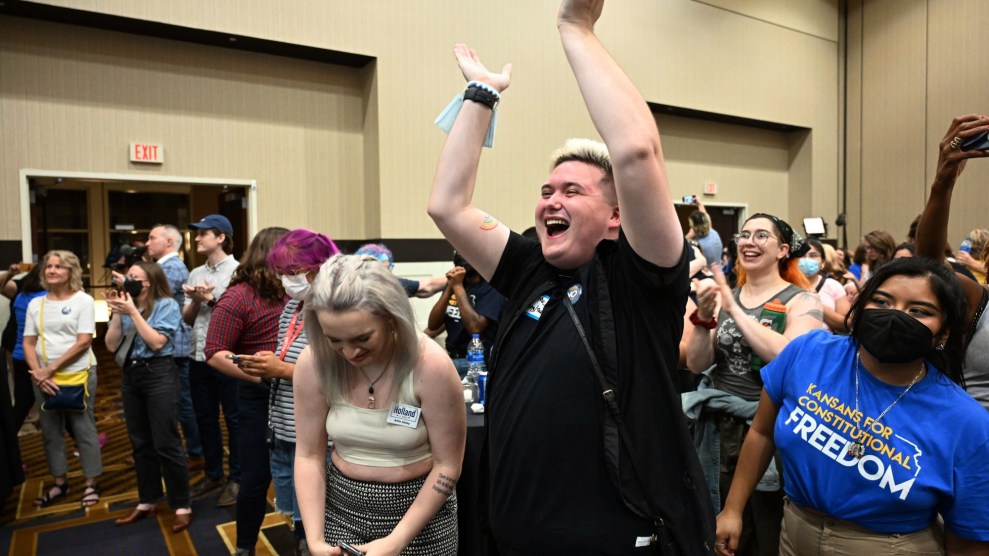 For the first time since a five-member majority of the US Supreme Court struck down the constitutional right to an abortion in late June, the future of abortion rights was on the ballot in Kansas. Literally.

The Tuesday Kansas primary election included an abortion ballot referendum with two options. Individuals could vote “yes” for a state amendment called Value Them Both, asserting there is no constitutional right to an abortion, which would not immediately change the state’s abortion laws, but make it easier for the state’s conservative legislature to pass abortion-restricting bills and bans in the future. Or, voters could opt for “no” on adding the amendment, which would affirm the state’s current abortion laws are explicitly protected by the Kansas constitution. With a mandatory 24-hour waiting period, ultrasound, and parent permission for minors, abortion is legal through 20 weeks post-fertilization.

In a contest that has been characterized as an early bellwether for how abortion will affect elections in a post-Roe world, Kansans, as of Wednesday morning, voted 59 to 41 against the ballot measure that state GOP leaders have been attempting for years and political pollsters had predicted would tip in their favor. The voter turnout in this summertime closed primary rivaled that of open general elections for Presidential races. In the 2020 general election, for example, 1,375,125 Kansans voted. For this 2022 primary, more than 908,000 ballots have been counted so far.

“Voters in Kansas turned out in record numbers to reject extreme efforts to amend the state constitution to take away a woman’s right to choose and open the door for a state-wide ban,” President Joe Biden said in a statement celebrating the decisive victory Tuesday night. “This vote makes clear what we know: the majority of Americans agree that women should have access to abortion and should have the right to make their own health care decisions.”

For now, abortion will remain protected by the Kansas constitution.

The unique aspects of this ballot initiative are not a perfect litmus test for the extent to which abortion views will impact the November midterms for state and Congressional candidates, or even what to expect in the abortion ballot initiatives being proposed in at least four other upcoming state elections. But what took place in Kansas has demonstrated two revealing factors about abortion politics that are likely to be at play at the ballot box going forward: the ingenuity of the anti-abortion strategy conservatives have spent years crafting, and abortion-rights advocates’ fervor in mobilizing their forces on a state level against the Dobbs v. Jackson Women’s Health Organization decision.

“If anti-abortion views can’t win in Kansas,” says Neal Allen, a political science professor at Wichita State University, “it’s hard to see how they can win in 50-50 states or even some light blue states.”

The hurdles that pro-choice advocates had to overcome in order to come out on top of the ballot referendum were incredibly high.

“If anti-abortion views can’t win in Kansas, it’s hard to see how they can win in 50-50 states or even some light blue states.”

For starters, the initiative took place during the primary rather than during the general election. Kansas conducts closed primaries, in which only people who are affiliated with the Democratic or Republican parties can cast ballots for candidates from those parties. A resounding 44 percent of Kansans are registered Republicans, while just 26 percent are affiliated with Democrats. The roughly 29 percent of Kansans who are unaffiliated voters only were allowed to vote on the ballot measure, and not for Republican or Democrat primary candidates—but many didn’t know that. And in Kansas, as with every other state in the nation, primary elections generally attract far less turnout than general elections.

“Anti-choice Kansas legislators chose this primary ballot on purpose because it was a more favorable environment for them,” says Ryan Stitzlein, the national political director for NARAL Pro-Choice America. “It’s essentially a Republican primary. The governor is uncontested in the Democratic primary, and they were expecting the turnout to be largely Republican.”

And if the timing was bad for pro-choice Kansans, the inventive messaging strategy employed by conservative state legislators was even worse.

The question voters were grappling with was fairly simple: Do you want to make it easier for the GOP-led state legislature to enact stricter abortion bans? But that was not the way the question appeared on the ballot. Instead, the ballot offered “yes” and “no” bubbles below this rather confusing statement:

Because Kansans value both women and children, the constitution of the state of Kansas does not require government funding of abortion and does not create or secure a right to abortion. To the extent permitted by the Constitution of the United States, the people, through their elected state representatives and state senators, may pass laws regarding abortion, including, but not limited to, laws that account for circumstances of pregnancy resulting from rape or incest, or circumstances of necessity to save the life of the mother.

Pro-choice advocates and non-partisan experts alike told Mother Jones this language is confusing, especially regarding the amendment’s references to state abortion funding, which does not happen. “An average voter could reasonably think that this amendment will eliminate state funding of abortion to Kansas,” says Allen, “but there is no state funding for abortion in Kansas.”

The mention of exceptions to abortion rules for rape, incest, and interventions to save the life of a mother also muddy the clarity. “Even though those exceptions are mentioned in the amendment text, nothing about the amendment creates them,” Allen adds. In other words, the state legislature could have passed a total abortion ban, not including any exceptions for rape or incest if the abortion referendum had passed.

Confusing the voters, in fact, was the point, Stitzlein argues, citing polling showing that more than eight in ten Kansans support at least some abortion access. “They’re trying to moderate their message here and hide the ball as to what this is actually about,” he says, “because their true intentions are so deeply unpopular: they want to ban abortion completely in the state.”

GOP state lawmakers have mostly been quiet on what legislative steps they would take if the amendment had passed, but they have attempted to ban abortions at least twice in the last decade. Kansas also became the first state to outlaw the use of the medical procedure of dilation and evacuation, which is the standard of care in most second-trimester abortions.

But that’s not what at least one faction of the anti-abortion group supporting the state amendment was relaying to voters in the final hours ahead of the vote. “Women in KS are losing their choice on reproductive rights. Voting YES on the Amendment will give women a choice. Vote YES to protect women’s health,” an unsigned text message obtained by Mother Jones and sent to swaths of Kansans read. The Washington Post reported the source of the extremely misleading message was a PAC started by former Kansas Republican Congressman Tim Huelskamp.

“Disinformation has been one of the hallmarks of the Republican Party platform here for the last few elections,” says Stitzlein. “They have continued to spread disinformation for decades about what abortion access looks like, what abortion care is, what type of people access abortion care. And again, it’s because their position is so deeply unpopular.”

Despite the bad timing, and the confusing ballot referendum language, and the nature of Kansas primaries, and the deceitful 11th-hour text, Kansas abortion-rights groups and supporters were victorious.

They had some help from outside the state.

But the most important ingredient contributing to the success was voter outrage, says Ashley All, the communications director for Kansans for Constitutional Freedom.

“I’ve been working in politics here for 18 years,” she says. “I’ve never seen people as engaged or as upset as they are right now. And it’s not just the people who I usually see engaging in political activism or organizing.”

“I’ve never seen people as engaged or as upset as they are right now. And it’s not just the people who I usually see engaging in political activism or organizing.”

Political scientist Allen agreed. “In terms of how engaged Kansans are in politics right now, this is probably more than even presidential elections,” he said. “Kansans know that our votes for president will not swing the electoral college. But now, Kansans’ votes will start to set the direction of abortion rights in this country.”

The referendum results may have been a buzzer-beater win for abortion-rights groups in Kansas, but, as Allen notes, “No matter what happens with the August 2 vote, abortion politics still will be contested in Kansas.”

Even if the state’s Democratic governor Laura Kelly wins what pollsters anticipate to be a close general election match-up in November, she will be term-limited. It is also extremely likely that Kansas Republicans retain their super-majorities in the state legislature as well.

Still, if the Kansas referendum vote is not the final say on the future of the state’s abortion rights, it was clear evidence of the strength of the pro-choice community’s ability to rally in a relatively short period of time. For pro-choice groups, the Kansas primary also may foreshadow their opponents’ strong midterm playbook.

“Do not underestimate the strategic decisions that have gone into these ballot measures—in terms of timing, in terms of language,” says Alesha Doan, a public affairs professor at the University of Kansas. “Anti-abortion groups have [also] very successfully co-opted the pro-choice language, reproductive rights language, and even reproductive justice language. That is something else I would absolutely suspect will occur in many of these other state fights as well.”