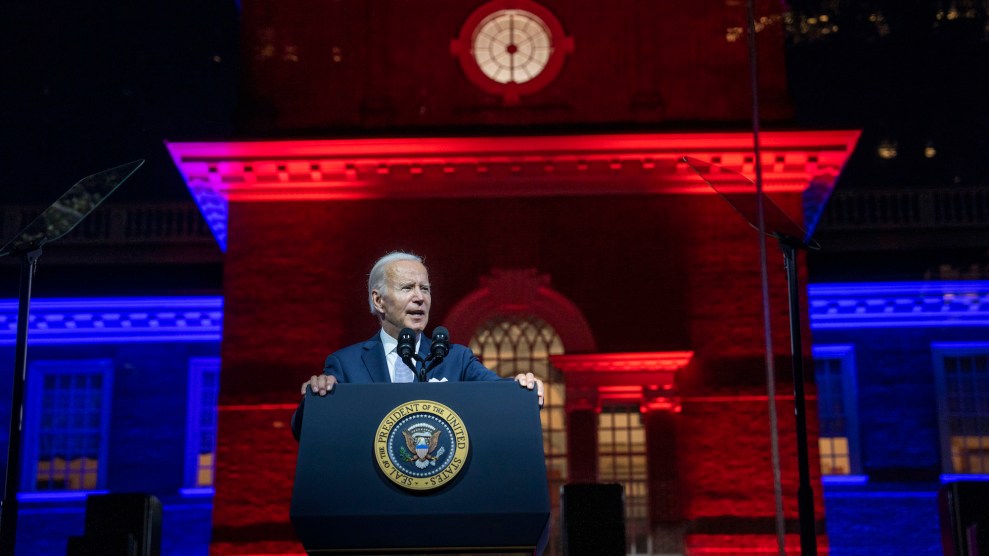 A few hours before President Joe Biden delivered his fiery speech calling former President Donald Trump and “MAGA Republicans” representatives of “an extremism that threatens the very foundations of our Republic,” Trump went on a conservative radio show and seemingly did his best to prove Biden’s point.

Speaking to Wendy Bell, an independent talk-radio host, Trump insisted, as usual, that he won the 2020 election—the strategic “Big Lie” his advisors planned even before voting took place. He said that if he runs again and wins the presidency, he would look “very, very favorably” at full pardons, plus a government apology, for the rioters who stormed the US Capitol and attacked police officers on January 6 in their attempt to stop Congress from certifying the 2020 presidential election results.

In a new development, Trump added that he was financially supporting some of the people prosecuted for their involvement in the mayhem.  “They were in my office actually two days ago. It’s very much on my mind. It’s a disgrace what they’ve done to them,” Trump said.

Later that night, in a speech reportedly motivated by lingering claims of election fraud ahead of this fall’s midterm elections, Biden condemned the Capitol rioters in scorching, abstract language, calling on listeners to defend democracy against the threat posed by Trump and his millions of supporters. “We can’t be pro-insurrectionist and pro-American. They’re incompatible,” Biden said in his prime-time address. “We can’t allow violence to be normalized in this country. It’s wrong. We each have to reject political violence with all the moral clarity and conviction this nation can muster now.”

Ten times during his speech, Biden singled out Trump’s supporters as “MAGA Republicans,” a group he said was “not the majority of Republicans” but a more extreme faction that threatened US democratic traditions. “MAGA Republicans do not respect the Constitution,” he said. “They do not believe in the rule of law. They do not recognize the will of the people. They refuse to accept the results of a free election…They promote authoritarian leaders, and they fanned the flames of political violence.”

Critics on the right assailed Biden’s “divisive” rhetoric, honing in on his blood-red backdrop: Independence Hall in Philadelphia, where the Constitution was written. Sen. Rick Scott (R-Florida) tweeted that Biden was a “raving lunatic” who “attacked half the country tonight because they don’t agree with his liberal agenda.” House Minority Leader Rep. Kevin McCarthy (R-California) offered a prebuttal: “When the president speaks tonight at Independence Hall the first lines out of his mouth should be to apologize for slandering tens of millions of Americans as fascists.”

How do we defend democracy, according to Biden? “We need everyone to do their part, so speak up, speak out, get engaged, vote, vote, vote,” he advised. “If we do our duty, in 2022 and beyond, then ages still to come will say we, all of us here, we kept the faith. We preserved democracy.”

It’s an incomplete prescription, to be sure, for an election in which voting rights are threatened in myriad ways. Four states will use election maps that federal judges ruled were illegally gerrymandered; in Michigan, an unelected board of canvassers, on a technicality, rejected pro-abortion-rights and voting rights ballot initiatives whose backers had secured the requisite number of signatures from registered voters. Biden alluded to such matters in his remarks, saying that MAGA Republicans were “working right now as I speak in state after state to give power to decide elections in America to partisans and cronies, empowering election deniers to undermine democracy itself.”

It remains to be seen what concrete steps Biden might use to protect representative democracy—or whether last night’s speech is the extent of his plan.