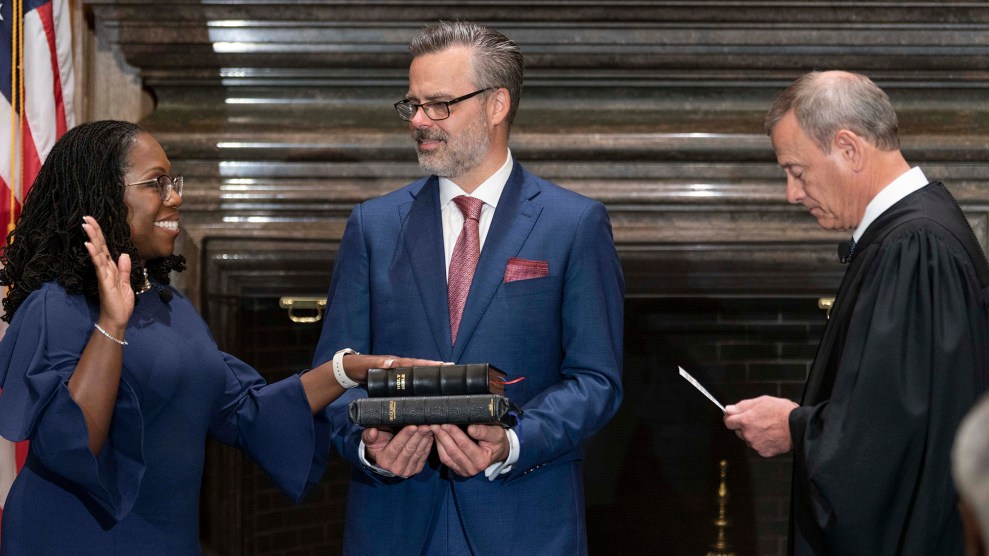 The Supreme Court’s conservative supermajority often rely on “originalism,” professing to apply the Constitution as they believe the founders intended—and did so last term to issue rulings eroding Americans’ rights to abortion and gun control. On Tuesday, during her second day of arguments as a Supreme Court justice, Ketanji Brown Jackson applied this same originalist approach in an area where her conservative colleagues avoid it. In a case out of Alabama that threatens to gut critical protections for voters of color, she delivered a history lesson on the original purpose of the 14th Amendment—laying out the background behind the clause to explain why it actually supports robust enforcement of voting rights.

In oral arguments in a case called Merrill v. Milligan, Alabama argued that the 14th Amendment, passed in 1868 to ensure citizenship and equality under the law for people freed from slavery, is in conflict with the Voting Rights Act, which requires drawing political maps with race in mind, in order to give minority groups often clustered in particular regions an equal shot at political participation.

Alabama’s contention is that the Equal Protection Clause of the 14th Amendment is in tension with this element of the Voting Rights Act: The 14th Amendment mandates race blindness while the VRA requires taking race into account. As Justice Amy Coney Barrett said in summarizing Alabama’s arguments, the 14th Amendment is a rock, the VRA is a hard place, and Alabama is caught in between. This contention is a key one that Alabama is relying on to bring a case that could force the country to essentially abandon the VRA, one of its best tools to fight discrimination and facilitate political equality.

Enter Justice Jackson. She countered Alabama’s arguments by explaining why the 14th Amendment and the VRA are not in conflict—thanks to originalism. “I don’t think that the historical record establishes that the Founders believed that race neutrality or race blindness was required,” she said. The 1866 Civil Rights Act said that Black citizens would have the same rights as white citizens. The 14th Amendment helped to make that a more permanent reality—but enshrining equality among races is not the same thing as mandating blindness to race. The amendment “was drafted to give a constitutional foundation for a piece of legislation that was designed to make people who had less rights and less opportunity equal to white citizens.” The Voting Rights Act, she continued, is doing exactly that.

Alabama wants to pervert the 14th Amendment to gut voting rights. So Justice Ketanji Brown Jackson decided to give them a much-needed history lesson. (As it turns out, originalism isn't just for conservatives.) pic.twitter.com/1y3hgpGyjx

Justice Jackson’s progressive originalism mirrors the objections of Justice Thurgood Marshall more than four decades ago to the idea that the 14th Amendment, enacted to lift up Black people, was in fact a constitutional impediment to doing so. “Such a result,” Marshall wrote in the affirmative action case known as Bakke, “would pervert the intent of the Framers by substituting abstract equality for the genuine equality the Amendment was intended to achieve.”

This abstract equality is, of course, inequality. In this case, so-called race neutrality would disempower Black Alabamians in the political process to the advantage of white Alabamians. It has been a project of the political right for decades to use the 14th Amendment to uproot remedies for racial discrimination in the name of “equal” treatment for all. Tuesday’s case is the latest to ask the court to wield the 14th Amendment as a sword against such remedies, and now the court has a 6-3 conservative majority that is sympathetic to this argument. Justice Jackson, newly installed, is calling it out.