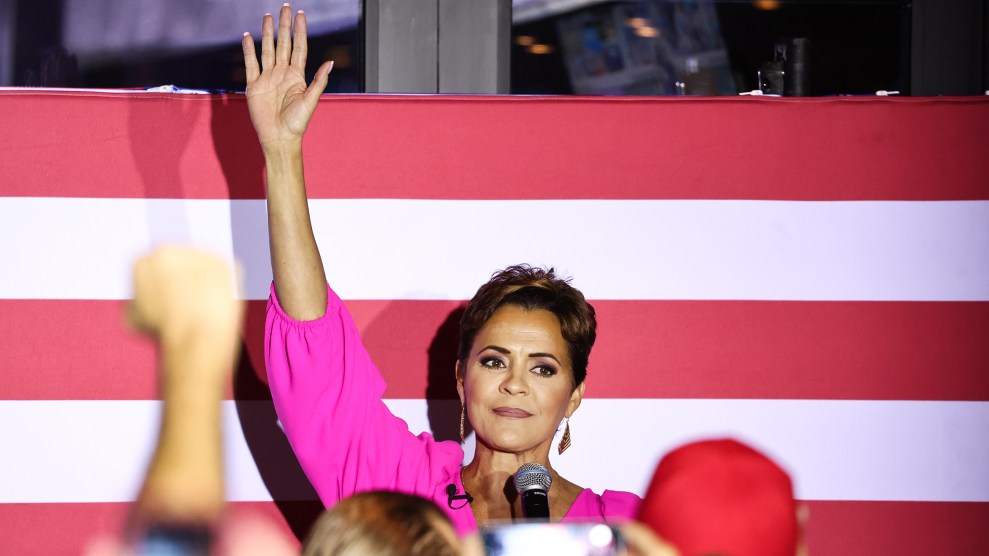 Arizona Republican nominee for governor Kari Lake gestures to the crowd during a stop on her 'Ask Me Anything Tour' at Chauncey Social in Scottsdale, Arizona. Mario Tama/Getty

It’s an ordinary and straightforward negative ad. A local businessman in Phoenix named Justin Erickson, who says he’s a husband and father of five children, earnestly complains that his family and his employees are “overwhelmed” by rising costs, and, as ominous music plays in the background, he declares defiantly that he can’t vote for Katie Hobbs, the Democratic gubernatorial candidate in Arizona, because she’s “too liberal to be governor.” The spot was paid for by the Yuma County Republican Central Committee and authorized by Kari Lake, the Trump-endorsed election denialist who is the GOP candidate for governor. It covers the Republican basics: A seemingly conscientious and decent owner of a small business—and his family—is dealing with economic hardship and feels endangered by those liberal Democrats. But the ad leaves out important information: Erickson is not merely a local business owner concerned with inflation; he is a homophobic and Islamophobic pastor.

Erickson runs a company called Hard Wired Coaching that conducts personality tests. His bio states he is “certified to coach and consult using the most accurate and practical psychometric on the planet.” He is also a pastor at the fundamentalist Desert Bible Church in Scottsdale. As the leader of that entity, he has preached slanderous anti-gay falsehoods, has declared Islam a “Satanic” force, and has advocated for “the submission” of women within their households.

In a 2014 sermon on homosexuality, Erickson proclaimed that “fifty percent of the homosexual LGBT-Now-Q community, 50 percent have AIDS. One in twenty are child molesters, on the sex offender registry.” These numbers were way off. In 2014, Gallup found that about 9 million Americans self-identified as LGBT, and a different study concluded that about 700,000 gay and bisexual men were living with HIV, far fewer than half the gay and lesbian population. Moreover, Erickson’s stats about LGBT child molesters were dangerously false. Under his math, about half of the 800,000 or so people on sex offender registries would have to be gay, yet according to one study, heterosexual pedophiles outnumbers homosexual pedophiles by 11-to-1. He was recklessly and inaccurately depicting LGBT people as threats to children.

In that sermon, Erickson also claimed, “80 percent of homosexuals have STDs, and—how sad is this?—2 percent, 2 percent of homosexuals in the LGBT community make it to the age of 65. The average lifespan for an average person in our world is 75. Those is the LGBT community, most of them don’t make it to 39.”  There seems to be no scientific basis for these claims. Though HIV still presented a health risk for gay men, the American Journal of Public Health in 2016 noted, “no general population-based survey, to the best of our knowledge, has examined whether self-identified lesbians, bisexuals, or gay men are more likely than are heterosexuals to experience early mortality.”

Erickson claimed that the “average homosexual has had in a lifetime over 500 sexual partners. Eighty percent admit that half of them are absolute total strangers. Thirty percent of those who commit homosexuality, 30 percent, have had over 1000 partners. Three hundred different people a year.” A 2013 study found that the mean number of male sexual partners for gay and bisexual in the preceding year men was 2.3—which indicates the “average” gay man does not have hundreds of sexual partners.

Erickson, in this sermon, went on to suggest that LGBT people were predisposed to horrific crime and murder: “The LAPD has a statistic, when they, when the officers come on to a crime scene and there is a murder and the murder itself has been an absolute bludgeoning, multiple stab wounds, multiple gunshot wounds, they immediately begin with the premise that this is a homosexual love quarrel.” In a 2019 Facebook post, Erickson further demonized gay people by posting a screenshot of an article declaring that Christianity and homosexuality are “irreconcilable.”

Erickson’s extremism extends beyond gay-bashing. His church champions a subservient role for women within their families. Its website says, “we affirm the headship of the husband and the submission of the wife.” The church describes this view as central to its beliefs. Only men, according to the church’s website, are allowed to be elders in Erickson’s Desert Bible Church.

And Erickson has been an Islam-basher. In a 2016 sermon, he asserted, “Islam is Satanic, let me be really clear about that, it is Satanic, did you hear what I said? It is Satanic.”

Neither Erickson nor the Lake campaign responded to emails and phone calls requesting comment.

In the anti-Hobbs ad authorized by Lake, Erickson is presented as a sincere businessperson reasonably fretting about inflation. But his agenda is much larger than that and far more extreme. He has spread vicious falsehoods about gay and lesbian people, casting them as depraved, wicked, and criminally-inclined. He has vilified Islam. And his church, which holds services in the gym of a charter school, demands the subservience of women. With this ad, Lake and the Yuma County Republicans have done much more than level a blast at Hobbs. They have validated a homophobic bigot.