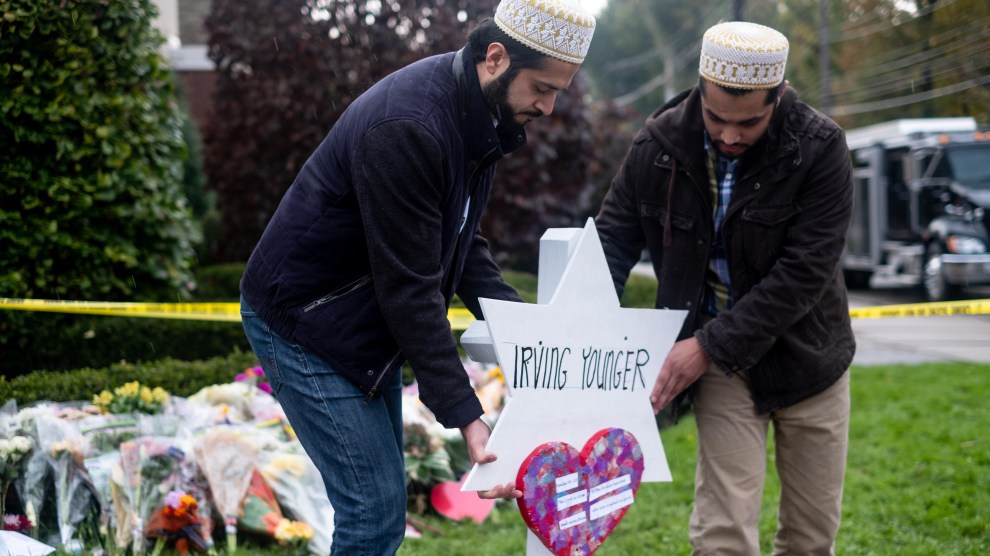 After the shooting at the Tree of Life synagogue, muslims from Hydrabad place a memorial for one of the victims.Aaron Jackendoff/SOPA/Zuma

Four years ago today, a heavily armed man went into the Tree of Life synagogue in Pittsburgh, Pennsylvania, and opened fire, murdering 11 people and injuring at least 6 others in one of the worst anti-Semitic attacks in American history. The accused perpetrator, 46-year-old Robert Bowers, was fixated specifically on HIAS, a Jewish organization that helps immigrant refugees in the United States. Prior to the massacre, Bowers allegedly posted multiple comments on social media referring to “caravans of migrant invaders,” a false specter that had been heavily hyped by President Trump and his allies at Fox News. “HIAS likes to bring invaders in that kill our people,” Bowers wrote on Gab, a hub for far-right hate. “I can’t sit by and watch my people get slaughtered. Screw your optics, I’m going in.” (Bowers pleaded not guilty to murder and hate-crime charges and is scheduled to go on trial next year.)

Ten months later, a 21-year-old named Patrick Crusius carried out a mass shooting at a Walmart in El Paso, Texas, where he allegedly murdered 23 people and injured nearly two dozen others. Most of the victims were Hispanic Americans and Mexican nationals. “This attack is a response to the Hispanic invasion of Texas,” the young white man stated in a screed he posted online just prior to the rampage, echoing the migrant-invasion theme frequently espoused by the president and his reelection campaign. Crusius also subscribed to “Great Replacement” theory, then a focus for Tucker Carlson and other Fox pundits who warned ominously of an endangered white American population. (Crusius confessed to police but later pleaded not guilty; federal and state trials for him are pending.)

Each of the perpetrators in his own right denied direct influence from Trump. Bowers had written that Trump was “a globalist” and said he didn’t vote for him, and Crusius’s screed asserted that his white supremacist views predated Trump’s rise to power. But the resonance of their horrific acts with the 45th president’s rank demagoguery was unmistakable. Trump had led the demonization of immigrants in far-right American politics ever since launching his campaign for the White House in summer 2015, when he rode an escalator into the lobby of Trump Tower and denounced Mexican criminals and “rapists” he claimed were flooding into the country. Neo-nazis and other hate groups rejoiced at Trump’s words.

Seven years later, Trump has continued to stoke the same fear and loathing during the homestretch of the 2022 midterm elections—including at recent political rallies in Pennsylvania and Texas, where he inveighed against “illegal aliens” numerous times.

“Millions and millions of people are pouring into our country,” Trump said during a speech on Sept. 3 in Wilkes-Barre, Pennsylvania. “Nobody has any idea where they’re from. Last month, 129 countries were represented. They’re emptying their prisons into the United States of America,” he emphasized, drawing loud jeers and booing from the crowd.

Trump’s efforts to dehumanize and breed contempt for his targets increase the risk for political violence.

Trump alleged those numbers again at a rally last weekend in Robstown, Texas, further amping up the message amid a heavy focus on border politics. “Let millions of people pour in,” he scoffed, referring to Democratic leaders. “Let convicts, prisoners come in from 129 different countries, murderers, rapists…How stupid can we be? How stupid are these people that are allowing our country to be ruined?” He continued: “Your border has been completely erased and violent crime in Houston, Dallas, Austin, and other Democrat run cities is totally out of control. This is madness. What’s happening to our country is madness.”

He further reiterated that “illegal aliens” were “invading” and “storming across” the southern border, and he blasted “wicked and venomous” political opponents. “We have a corrupt country. We have a horrible border. And we have really sick elections.”

As I’ve detailed in a series of pieces, the ex-president continues to alarm experts who warn that Trump’s rhetoric is a potent form of incitement known as stochastic terrorism. His tactics are likely to instigate random and unpredictable—yet ultimately highly probable—acts of violence from his most extreme supporters. And Trump continues to use such rhetoric against a darkening backdrop: anti-Semitism is on the march, while recently published research indicates a growing appetite for political violence in America, foremost among partisan Republicans.

One leading threat-assessment expert told me this month that the national atmosphere remains “very concerning,” from the ongoing Justice Department investigations of the January 6 insurrection to various threat cases marked by QAnon conspiracy theories and “lots of talk about Trump taking back power, the need to fight the enemy and save the country.”

Trump has escalated his disturbing brand of incitement in the two years since he lost the 2020 election. He has also effectively spread and normalized these tactics among Republican leaders. His efforts to dehumanize and breed contempt for his targets further increase the risk for political violence, according to research from violence experts.

As Trump campaigns on behalf of candidates he deems to be MAGA-faithful, his focus may be on helping them win votes and recapturing Republican control of Congress. But that could come at an ugly additional cost, the kind that still haunts deeply damaged communities in Pittsburgh and El Paso and should not be forgotten by the nation at large.