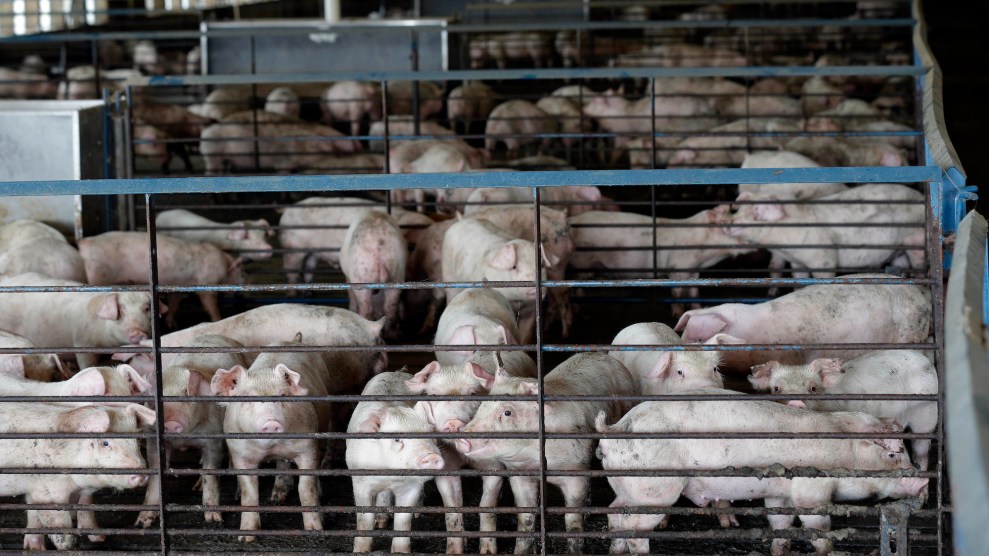 Inside view of a hog operation in Farmville, NC. Gerry Broome/AP Photo

Every year, the US Department of Agriculture spends billions of dollars propping up large-scale farming of commodities like corn and soybeans. These crops in turn suffuse the food system, fattening animals on America’s factory-scale meat farms and providing the bulk of sweeteners and fats in processed foods.

This style of agriculture doesn’t just underwrite a health–ruining cuisine. It also contributes to environmental mayhem: soil erosion and water pollution on an epic scale and a gusher of greenhouse gas emissions from the concentrated manure of all of those confined cows, pigs, and chicken, and from the fertilizer used to grow all that corn. But the USDA doesn’t just pay farmers to churn out as much corn and soybeans as they can. It also operates “conservation” initiatives intended to mitigate the environmental harms of this commodity machine.

The department’s conservation spending adds up to a fraction of its outlay for programs that encourage maximum production, consequences be damned. The Environmental Working Group calculates that between 1995 and 2020, the USDA doled out a total of nearly $348 billion on commodity and crop-insurance subsidies vs. $52 billion on conservation. So for every dollar the department offers farmers in conservation funds, it dangles about $6.70 to entice them to farm all-out.

Still, those conservation dollars are an important countervailing force, right?

In fact, the USDA could spend its conservation resources in much more beneficial ways, a new EWG report suggests. The report focuses on the agency’s two largest conservation programs, the Environmental Quality Incentives Program (EQIP), and the Conservation Stewardship Program (CSP). Both give farmers money in exchange for implementing environmentally friendly practices. EWG combed through USDA data in search of funding for activities the agency deemed “climate-smart”—i.e., those that help farmers cut greenhouse-gas emissions or store carbon in the soil. The Natural Resources Conservation Service, a USDA agency, maintains just such a list.

From 2017 to 2020, the EWG report reveals, just $844 million of the more than $3.6 billion of EQIP payments went toward “climate-smart” practices. Of the Top 10 practices funded by EQIP grants, only one, cover crops, lands on the NRCS’s “climate-smart” list. Farmers plant cover crops—which drew $340 million in EQIP funding over the period, more than any other practice—after harvesting cash crops like corn and soybeans. The cover crops buffer the land from heavy winter and spring storms, helping to prevent erosion.

But cover crops are a “bit iffy when it comes to the climate benefits,” says Anne Schechinger, EWG’s midwest director, who oversaw the report. That’s because they only reliably sequester carbon in soil when they meet two strict conditions: They must be used every year on fields that are never plowed. Back in 2013, I wrote about an Ohio farm that fit thar bill and demonstrated an impressive record of building carbon in soil. But then, as now, David Brandt’s operation is a unicorn.

EWG conducts annual aerial remote-sensing surveys to gauge off-season cover crop adoption in the corn- and soybean-dominated Midwest. Despite the $340 million EQIP provided between 2017 and 2020, “we always find that less than 5 percent of cropland has cover crops,” she says. Worse, the relatively tiny bits of land under winter cover shift from year to year, she says, suggesting little consistency in planting patterns—and little climate-stabilizing bang for the taxpayer buck.

Integrating trees with crops—a system known as agroforestry, which I wrote about here—is a much more robust way to hold soil in place while also sequestering carbon, Schechinger says. But EQIP only doled out $68 million to “tree & shrub establishment” projects over the aforementioned period.

The great bulk of the EQIP money, meanwhile, goes to projects with zero climate impact, like installing sprinkler systems ($217 million) and irrigation pipelines ($163 million). EQIP also throws money at practices that contribute to climate change. Over the 2017-2020 period, the program delivered more than $174 million to farmers building “waste storage facilities” for livestock manure—a mundane way to describe cesspits that gather the waste of large confined hog and cattle facilities. As manure breaks down in these “lagoons,” it emits huge amounts of methane and nitrous oxide—greenhouse gases with many times the heat-trapping power of carbon.

The other USDA program, the CSP, has an even less distinguished environmental record. “Only a miniscule fraction,” of the payments went to climate-smart practices and enhancements: “$11.4 million, or just 0.3 percent of the $3.7 billion spent,” the report states—and that may be an undercount, because despite multiple Freedom of Information Act requests, the USDA “refused to give EWG data for EQIP and CSP practices for which there were five or fewer contracts funded in a county in a particular year.”

The authors added: “This data gap makes it impossible to form a complete picture of spending, but what’s missing only underscores the dearth of funding for and low adoption rates of the USDA’s climate-smart practices and enhancements.”

The Inflation Reduction Act, the climate legislation signed into law in August, will pump an additional $11.7 billion into EQIP and CSP between 2023 and 2026, significantly boosting their budgets. The IRA stipulates that the money flow to projects that the USDA “determines directly improve soil carbon, reduce nitrogen losses, or reduce, capture, avoid, or sequester carbon dioxide, methane, or nitrous oxide emissions, associated with agricultural production.”

EWG says it will be watching to make sure the agency complies. Per Schechinger, “It’s on USDA to make sure that these funds are being spent as Congress intended—and not on business as usual.”