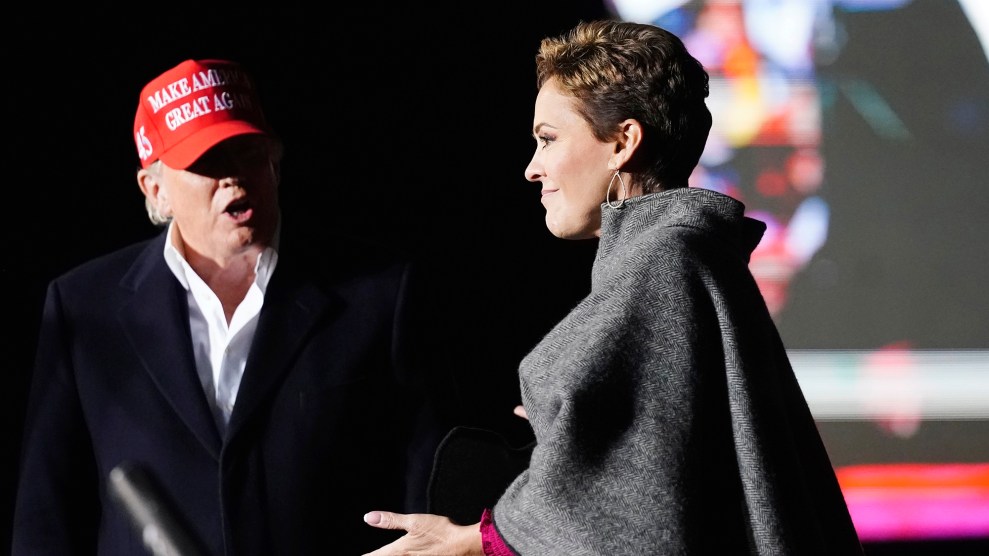 With four of the country’s most extreme Trump-backed election deniers on the ballot in Arizona Tuesday, Democrats headed to the polls worried that the future of democracy in their state was on the line. At campaign stops and, later, at Democratic Sen. Mark Kelly’s election night watch party, voters told me that the issue of democracy was top of mind. And they aren’t done worrying yet. With ballots still being counted in several razor-thin races, it remains possible that one or more of these Big Lie Republicans will be able to use Arizona’s official levers of power to interfere with the results of the 2024 election.

Kelly, whose race against Republican challenger Blake Masters is too close to call, held his election night party at the historic Rialto Theater in downtown Tucson. The concession stands served a full cash bar and popcorn, creating the vibe of an actual party rather than the gymnasium ambiance more common at such events. Wyatt Appel, a 22-year-old student at Arizona State University, brought his parents to Kelly’s party. Keeping election deniers out of office, he said, was the issue he cared about most. Susan Vermilyea, 76, rested on the stairs to the theater’s upper balcony, enjoying the sense of optimism in the room. Democracy, rights, and decency were “at stake,” she said.

But no one I met embodied this democracy-driven voter more than Joshua Polacheck, 42. His cap was covered in political buttons for Democrats, and he casually ate from a bag of popcorn. Occasionally, he’d check for the latest results on his phone as he worried that the Democrats’ early leads weren’t large enough to hold—fears that may prove prescient in the coming days. Polacheck had knocked on doors and fundraised for Kelly, as well as for the Democratic nominees for governor and secretary of state, whose races also remain too close to call. In 2020, he led the Pima County Democratic Party. He was friends with the local elected Democrats moving about the party. But until 2015, he said, he had been a lifelong Republican.

A former State Department officer, Polacheck said the threat Donald Trump posed to democracy was too much for him. “I’ve seen democracies go sour” living abroad, he said. When that happens, “you have to pick a side.” We might disagree on marginal tax rates, he said of himself and his fellow Democrats, “but on the fundamental values, we agree.”

Polacheck is one of many moderate Republican voters who distanced themselves from the party after the rise of Trump—and likely helped blunt the expected red wave on Tuesday by refusing to vote for Trumpist Republicans. Whether the issue pushing them away from the GOP is the fate of American democracy, reproductive rights after the Supreme Court overturned Roe v. Wade, or a refusal to go along with Trump’s wing of the GOP, the results on Tuesday suggest that, across the country, a number of traditional Republican voters did not come home to their former party this year.

Multiple Trump-backed candidates lost races on Tuesday that could have been winnable for a more appealing, less fringe Republican. Georgia makes this point best: Gov. Brian Kemp, who distanced himself from Trump and the Big Lie that the 2020 election was stolen, sailed to victory. Herschel Walker, the Trump-backed Senate hopeful with a troubled personal history, trails incumbent Sen. Raphael Warnock (D) and is headed to a runoff.

But it was in Arizona where voters faced perhaps the starkest choice about democracy itself. The GOP’s gubernatorial nominee, Kari Lake, made the lie of a stolen election in 2020 the centerpiece of her political rise. Election denialism and Trump’s endorsement likewise fueled the candidacies of Mark Finchem for secretary of state and Abe Hamadeh for attorney general. Masters similarly earned Trump’s endorsement a day after questioning the results of the 2020 election, but his own antipathy for democratic values seems to run deeper than Trumpist loyalty and political opportunism—he’s a longtime acolyte of billionaire Peter Thiel, who spent millions on Masters’ campaign and has written that freedom and democracy are “incompatible.” Masters is a longtime fan of a blogger who believes the United States should get over its “dictator-phobia” and function as a monarchy. All four of the election-denying Republicans running for statewide office in Arizona could still win their contests.

Arizona is one of the most closely contested states in the country—and its status as a swing state is new, driven in large part by the increased political participation of the state’s Latino population. In 2020, President Joe Biden won the state by just over 10,0000 votes. In a midterm year in which Republicans often fell short of expectations, Arizona may become the one battleground state where Trump-backed candidates take full control and launch a dark new experiment in one of the country’s laboratories of democracy. It’s one thing for Trumpist Republicans to control a deep red state that will vote for Trump or a similar candidate no matter what; it’s quite another for Trump loyalists to run a state that will be critical to the next presidential election.