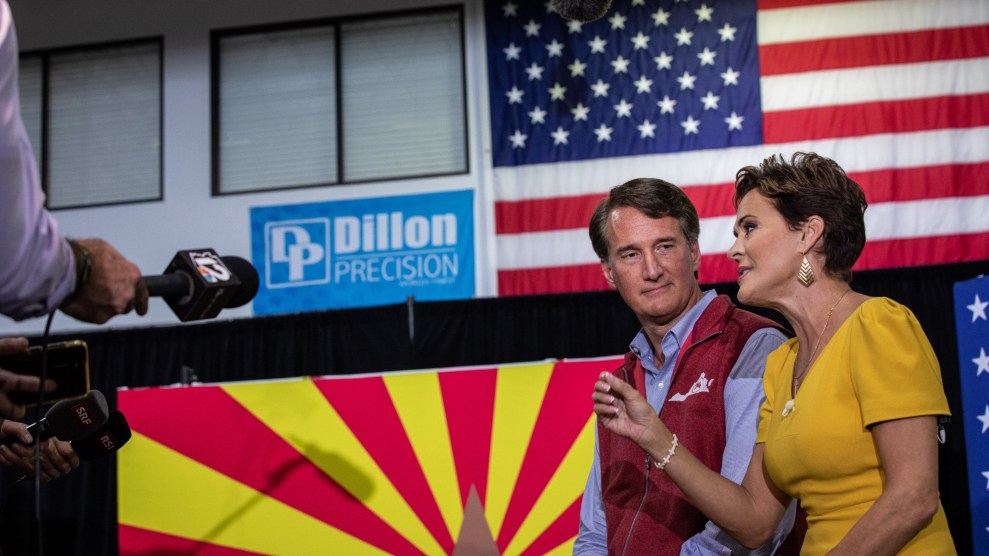 Glenn Youngkin is a busy man. In the weeks leading up to the midterm elections, he attended events for Republican hopefuls in battleground states like Arizona, Georgia, and Nevada. On its own, this isn’t out of the ordinary—politicians endorse kindred candidates all the time. Florida Gov. Ron DeSantis embarked on a high-profile tour of his own, even while running for reelection.

What is notable, however, is the increasingly glaring tension between Youngkin’s brand as a sensible, center-right politician from a purple state and the endorsements he’s been handing out to unabashed right-wing extremists. Many pundits were lulled into portraying of Youngkin—with his sweater vests and deft ability to dodge both controversial questions and public events with Donald Trump—as a middle-of-the-road politician, at least compared to other big-name GOP governors, like DeSantis or Greg Abbott of Texas. But in a Republican Party increasingly dominated by Trump sycophants, anti-woke warriors, and election deniers, Youngkin is aligning himself with politicians who fall on the far end of the conservative spectrum. Let’s take a look.

On October 19, Youngkin held several campaign events for Lake, a local Fox anchor-turned-MAGA superstar. The Arizona candidate for governor was the “highest-profile, most MAGA-aligned“ candidate that Youngkin had stumped for up to that point, according to Politico. And it’s not hard to see how she earned that designation.

Since quitting her media job to start her political career, she’s not hesitated to regurgitate far-right talking points. She’s railed against Covid mandates, denounced the “corrupt news media,” and spread unfounded stolen election claims—even for a primary election that she won. Not to mention, Lake also publicly embraced a Nazi sympathizer and, according to the Daily Beast, called for her Democratic opponent, Katie Hobbs, to be jailed for defending Arizona’s electoral process and certifying the 2020 election results while serving as secretary of state. None of these controversies seemed to dissuade Youngkin from backing Lake.

“What I found in Virginia was that we could bring together ‘Forever Trumpers’ and ‘Never Trumpers,’ and libertarians and tea party members, and, oh, by the way, lots of independents and lots of Democrats,” said Youngkin in Arizona. “And I think that the Republican Party has to be a party where we are not shunning people and excluding them, because we don’t agree on everything.”

In September, Youngkin attended an event in support of former Maine Gov. Paul LePage, who has described himself as “Donald Trump before he was popular.” Like Lake, LePage has defended the ex-president’s unfounded claims of election fraud.

“There were 163,000 people who voted in the last presidential election that didn’t have any IDs,” said LePage, who is now running against incumbent Gov. Janet Mills in a bid to recapture his old job.

LePage is well-known for making various bigoted comments over the years, landing him in some pretty hot water. In January 2016, for example, he answered a town hall question about Maine’s efforts to curb drug trafficking with a string of racist tropes.

“These guys with names like D-Money, Smoothie, Shifty. These type of guys who come from Connecticut and New York, they come up here and sell their heroin and then they go back home,” said LePage. “Incidentally, they impregnate a young white girl before they leave.” He later apologized, saying he meant to say “Maine girls.”

Seven months later, LePage was again speaking about Maine’s plans to prevent drug crime. “Don’t you…you’ve been in uniform? You shoot at the enemy,” said LePage, addressing a state lawmaker who was serving the National Guard. “You try to identify the enemy and the enemy right now, the overwhelming majority of people coming in, are people of color or people of Hispanic origin”

LePage also claimed that he had a binder containing records of every single person arrested for drug dealing in Maine and claimed that the overwhelming majority were Black and Hispanic.

“I will tell you that 90-plus percent of those pictures in my book—and it’s a three-ringed binder—are Black and Hispanic people from Waterbury, Connecticut, the Bronx and Brooklyn.” An investigation by the Washington Post revealed that most of the people in this binder (yes, it was actually real) were apparently white.

That same week, at a press conference in which he was questioned about other racist remarks he’d made earlier that year, LePage responded to reporters with the following: “Let me tell you something: Black people come up the highway and they kill Mainers. You ought to look into that.”

According to the Washington Post, Youngkin denied knowing about LePage’s controversies before endorsing him. After the event, Youngkin did denounce LePage’s past statements and claimed that LePage had apologized and had simply “misspoke.”

Zeldin, who is running for governor in New York, is yet another Republican hoping to emulate Youngkin’s success in a state Joe Biden carried. During a rally on October 31, Youngkin told the crowd of 500 that he’s “passing the baton” to Zeldin and that a win by the Long Island congressman on Election Day would send a “shockwave around the world.”

Zeldin is a staunch Trump defender and was one of the 147 members of Congress who voted to overturn the 2020 presidential election. After trailing incumbent Gov. Kathy Hochul for months, Zeldin now has a serious chance of winning.

In August, Youngkin headlined a rally in Michigan for gubernatorial candidate Tudor Dixon. Dixon, who received Trump’s stamp of approval back in July, has parroted the ex-president’s claims of voting fraud and has baselessly accused Michigan’s secretary of state of violating election laws.

“In 2020, Jocelyn Benson knowingly and willfully broke laws designed to secure our elections, which directly correlates to people’s lack of faith in the integrity of our process,” said Dixon’s spokesperson in a Washington Post piece.

On October 26, Youngkin held a rally for Wisconsin gubernatorial candidate and noted election denier Tim Michels. “This state has flipped back and forth and it’s time for Wisconsin to have a Republican governor,” said Youngkin.

While Michels recently said that he would accept the results of the upcoming November election, he has spent the much of the campaign pledging to “restore election integrity” and regurgitating Trump’s election fraud falsehoods. In May, during a radio appearance on the Regular Joe Show, Michels said that he was open to the idea that the 2020 election had been stolen.

“Maybe, right. We know there was certainly a lot of bad stuff that happened,” said Michels. “There were certainly illegal ballots. How many? I don’t know if Justice Gableman knows. I don’t know if anybody knows. We got to make sure. I will make sure it doesn’t happen again.” As NPR reported in August, Michels said during a debate that, if elected, he would investigate the results of the 2020 election and consider trying to overturn it.

“I’m really fired up about this,” said Michels in the clip. “When I’m sworn in in January—it’s eight months from now—I will look at all the evidence, and everything will be on the table. I’ll make the right decision.”

It’s not uncommon for governors to endorse their political party’s congressional candidates from their own state. And Youngkin is honoring that tradition, passing endorsements to three GOP candidates in hotly contested House races in Virginia. On October 25, Youngkin and Texas Sen. Ted Cruz held an event for Yesli Vega, a former police officer who’s running against incumbent Abigail Spanberger for the state’s 7th congressional district.

“Yesli is a fireball. I listen to Yesli talk and give me the torch, the pitchfork, and let’s march to take America back,” said Cruz at the press conference. Vega hasn’t been in politics for very long, but she certainly hasn’t wasted anytime diving headfirst into controversy.

In April, Vega defended the January 6 rioters, saying that they were being unfairly persecuted for exercising their right to protest.

“It was actually a group of Americans exercising their first amendment rights and as a result of doing that they’ve been persecuted, shamed, forced out of their jobs, forced to retire, and listen, the double standard is sickening,” said Vega, who recently received an endorsement from Donald Trump.

Youngkin has held several rallies for Kiggans, a Virginia state senator challenging Rep. Elaine Luria in the 2nd congressional district. Luria has repeatedly called her opponent an election denier, though Kiggans—like many conservative politicians—has assiduously avoided clarifying whether or not she believes the 2020 race was fair. But her legislative actions speak louder than her words. In 2020, Kiggans was one of four state senators who voted in a favor of a $70 million budget amendment to audit the 2020 election results in Virginia.

In a candidate survey, Cao expressed support for “releasing and seeking compensation” for any January 6 suspects who were “unlawfully” arrested or incarcerated for their role in attempting to overturn the election. He also casted doubt on the 2020 election results during a fundraiser in Reston.

“It’s just very difficult for me to understand what happened in 2020 when [Biden] sits in their basement for the whole election cycle and they got more votes than Barack Obama,” Cao said.