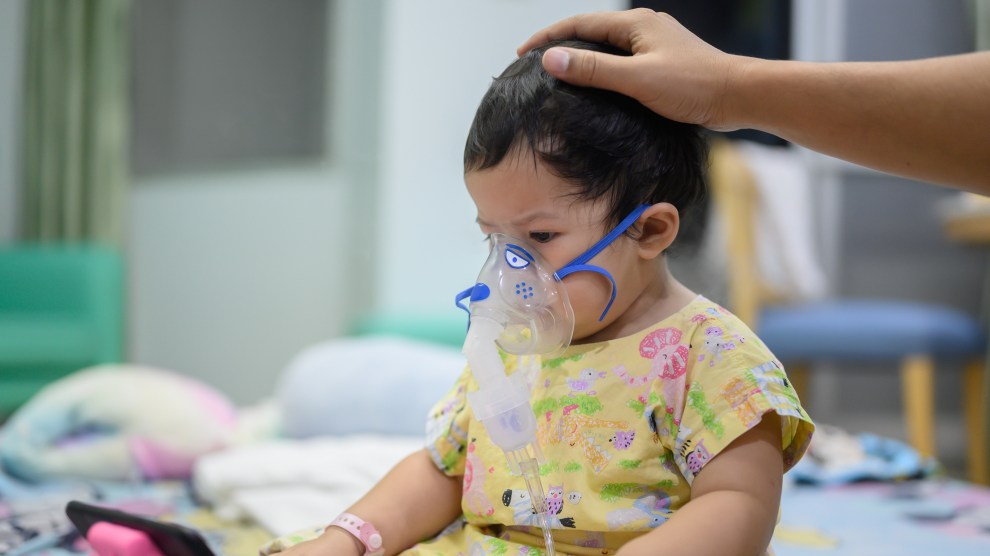 An infant sick with RSV receives a breathing treatment.graphixchon/Getty Images

Across the country, children’s hospitals are reporting record numbers of admissions—not just from Covid, but also from a host of other seasonal respiratory viruses. Particularly worrisome among these is respiratory syncytial virus, more commonly known as RSV. The illness, which can make breathing difficult for young children and elderly adults, can be fatal, typically killing a few hundred children and as many as 10,000 seniors every year. Drug companies have been trying for years to develop a pediatric vaccine for the virus with little success—until last month, when Pfizer announced that it would seek approval for its new shot after clinical trials showed it was extremely effective. Pfizer’s RSV vaccine, which is given to pregnant women before delivery so that they can pass antibodies on to the developing fetus, was hailed by pediatricians as a major accomplishment.

Yet it didn’t take long before anti-vaccine activists began to distort the facts about this vaccine and others in the pipeline. Some of the most prominent have suggested that pharmaceutical companies are exploiting the current RSV surge in order to create a market for their forthcoming shots. Joseph Mercola, the influencer who built an empire on spreading health misinformation, made this argument in a rambling article he published earlier this month. “The fact that RSV is now being highlighted as a severe risk is understandable,” he wrote, “in light of the fact that the first-ever RSV vaccines are now in the pipeline.” Robert F. Kennedy, Jr., the founder of the anti-vaccine advocacy group Children’s Health Defense, swiftly tweeted that article out to his 481,000 followers.

Dr. Kristina Bryant, a pediatrician who specializes in infectious disease at Norton’s Children Hospital in Louisville, Kentucky, and a member of the American Academy of Pediatrics, said that any attempts to portray the current RSV surge as a marketing ploy are demonstrably untrue. Her hospital recently had to add extra bed capacity due to the overwhelming number of RSV cases. She pointed out that RSV numbers were lower in the last few pandemic years because more people were wearing masks, which prevent the spread of respiratory diseases. But before the pandemic, the cases of the disease regularly strained hospitals during particularly intense surges. The virus, she said, has “been a concern for pediatricians and parents for a long time,” she said. “RSV is real.”

The virus has “been a concern for pediatricians and parents for a long time. RSV is real.”

The current surge in RSV misinformation has also alarmed Aoife Gallagher, an analyst with the Institute for Strategic Dialogue, an anti-extremism think tank with offices in Europe and the United States. At the beginning of the fall, during the start of the current wave of RSV cases, Gallagher said, she observed that the most widely shared tweets about RSV came from trustworthy medical authorities. When she ran the same analysis earlier last week, though, she found that seven of the top 10 tweets repeated conspiracy theories or misinformation.

The sources of the false RSV narratives, she found, were well-known anti-vaccine activists. Del Bigtree, the host of an online anti-vax show called The Highwire, falsely claimed that Covid vaccines were responsible for RSV infections. Judy Mikovits, the discredited virologist behind the Plandemic Covid conspiracy film, falsely suggested that RSV (along with Ebola and Zika) could be cured with the drugs hydroxychloroquine and ivermectin.

Some of the misinformation that Gallagher found contained violent ideology. In an interview earlier this month with right-wing TV host Stew Peters, Stella Immanuel, a physician and former Trump adviser who suggested that reproductive health problems were caused by having dream sex with demons, claimed that mRNA RSV vaccines were part of a grand plan to surveil citizens. “They want to make sure that the mRNA technology gets into everybody because their whole idea is to monitor the whole of the human race,” she said. “They want surveillance under the skin like The Matrix, like a human cyborg.” Peters chimed in that if he were president, public health officials who promoted Covid vaccines would be “immediately arrested, indicted, tried. and if convicted, they would be fried—publicly executed.”

As troubling as the wild and rapidly spreading RSV myths are, Gallagher says they aren’t surprising. Nearly three years after the emergence of Covid, she says, a pattern of infectious disease misinformation has emerged. After public health officials sound an alarm about an outbreak and well-established anti-vaccine networks mobilize, they quickly pump their narrative into social media channels to be picked up by influencers. “If you even go back to the monkey pox surge, at the start of the summer, we saw the same thing,” she says. “With any news of a virus or disease outbreak, we expect to see the same tropes used and recycled.”

“With any news of a virus or disease outbreak, we expect to see the same tropes used and recycled.”

Not all of the false narratives around RSV have to do with vaccines—some attack public health measures more broadly. Another promoter of RSV conspiracy theories is the Southern California-based anti-vaccine crusader Leigh Dundas, who gained prominence during Covid by leading efforts to harass public health officials who promoted mask mandates, helping to orchestrate the anti-vaccine trucker convoys, and riling up a DC crowd ahead of the January 6th insurrection at the Capitol. Earlier this month, public health officials in Orange County declared a health emergency in response to rapidly rising rates of pediatric hospitalizations due to respiratory viruses. The declaration was meant to allow general hospitals to open up more beds to sick children—yet Dundas claimed that the true intent was to usher in another era of lockdowns. At a comment session at an Orange County Board of Supervisors meeting on November 2, she compared public health officials to Nazis, adding, “You will not mask us! You will not quarantine the well or the sick!” The clip, Gallagher noted, made the rounds on social media, with 6,000 reactions, nearly 5,000 shares, and 1,000 comments on Dundas’ post about it on Facebook. A tweet with the clip was retweeted more than 5,000 times.

Gallagher sees the current wave of RSV misinformation as part of a larger movement to erode trust in public health in the wake of the pandemic. Earlier this month, I wrote about the ominous downturn in rates of routine childhood vaccination rates in Florida. Pediatricians there told me they believed that misinformation around Covid vaccines had scared some parents off of immunizations more broadly. Bryant, the pediatrician, said she, too had noticed “more vaccine hesitancy, not just about Covid vaccines, but more questions about routine vaccines.”

“We’re starting to see the impacts of the broadening of anti-vaccine campaigns over the last few years,” says Gallagher. “But I think it’s going to be years down the line until we really come to terms with the effect they’re having.”