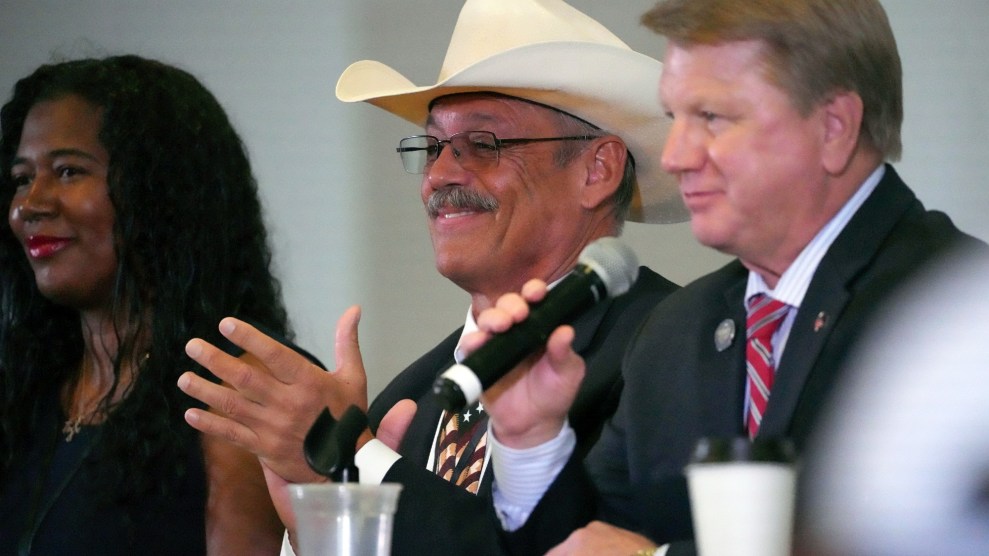 If you want to see just how crazy the GOP has become, you need only watch the video recording of a conference on “election integrity” held in Florida on Saturday by a group of 2020 election denialists. In attendance, either virtually or in person, were the Republican candidates running for secretary of state—the guardians of election integrity—in the crucial swing states of Arizona, Nevada, and Michigan, respectively, Mark Finchem, Jim Marchant, and Kristina Karamo. Each has already demonstrated their own devotion to extremism by associating with QAnoners and championing Donald Trump’s baseless claims that the 2020 election was stolen from him. But they further signaled their loyalty to the politics of paranoia and conspiracism by hobnobbing with conference participants who have promoted some of the looniest conspiracy theories.

Ten days before the election, Finchem took precious time from campaigning in Arizona to attend this event. Marchant and Karamo zoomed in. Onstage at the Orlando hotel venue, he was seated next to Audrey Trujillo, the long-shot Republican candidate for secretary of state in New Mexico, and Kevin Hoyt, a gun-rights activist and fringe independent candidate for governor in Vermont—both of whom have trafficked in their own rich assortment of bonkers conspiracy theories that reach beyond the usual QAnon and 2020 truther fare.

Trujillo is a self-proclaimed right-wing “influencer.” She has pushed the Alex Jones-backed notion that Democrats and the Deep State have orchestrated school shootings to “make people fearful” and “take away our guns.” She’s even tied school massacres to conspiratorial ideas about Covid, saying “that’s exactly what they’ve done with this virus. They’ve done it. They use fear, fear to control us. That’s all it’s about, is about controlling the people.” Add to all this her endorsement of the popular in QAnonish belief that President Joe Biden has a body double or clone who appears in public for him.

In May, the Albuquerque Journal reported that Trujillo’s Twitter account had posted a tweet mocking a Spanish accent and an antisemitic tweet that suggested Jews were unduly involved in the development of the Covid vaccines. Asked about the tweet, the paper noted, “Trujillo initially said the tweets were fabricated, perhaps by Antifa activists in Santa Fe creating fake accounts to embarrass political opponents. But after confirming the profile in question was hers, she suggested her account may have been hacked and—if it wasn’t—that the tweets weren’t intended to be racist.”

Hoyt is a marginal candidate in Vermont and in the past has warned of mass arrests and communications blackouts—cherished hypotheticals in the QAnon canon. He attended the January 6 rally for Trump in Washington and afterward spread the false claim that Antifa had concocted the riot at the Capitol. As the Vermont publication Seven Days reported, “In a pair of conspiracy-laced videos posted for his nearly 5,000 Facebook friends last week, Hoyt claimed to have seen police escorting buses carrying Antifa members—without explaining how he knew who they were—toward the Capitol grounds and said that he knew that Trump supporters did not start the riot because they do not bring ‘rope or sledgehammers’ to rallies.” Hoyt has recently posted QAnon material on his Facebook page and accused top Vermont politicians, including Sen. Bernie Sanders, of involvement in human trafficking. In another Facebook post, he claimed the government was “engineering” climate change for “profit.”

Referring to his appearance at the Florida conference, Hoyt wrote, “Special thanks to Mr. Juan O. Savin for dragging me down here and allowing me the opportunity to represent Vermont.” Savin, whose real name is Wayne Willott, is a veteran conspiracy theorist who has become a QAnon movement leader. One of the many crazy beliefs of some QAnon adherents is that John F. Kennedy, Jr., who was killed in a plane crash in 1998, faked his death and is still alive and committed to the presidency of Donald Trump—and that Savin is actually JFK, Jr. (Another candidate for this position is Vincent Fusca.) According to the Daily Beast, “Savin is “the founder of the America First Secretary of State Coalition (AFSOSC), an organization working to place election-denying candidates in charge of states’ elections.” This outfit was one of the sponsors of the Florida conference. Marchant has credited Savin with convincing him to run for secretary of state in Nevada.

Also on this panel was Tina Peters, a Colorado county clerk and recorder who was indicted on several charges related to allegedly facilitating the unauthorized copying of sensitive voting machine information that was subsequently shared with 2020 election denialists. (She has pleaded not guilty.)

“When it comes down to it, they want to control us.” She did not identify who “they” are.

During this discussion, Finchem, Marchant, and Karamo stuck to their familiar talking points and deployed debunked allegations of 2020 election theft in their states. Trujillo went further and denounced “corruption in every state to interfere in our elections.” She added, “When it comes down to it, they want to control us.” She did not identify who “they” are.

Hoyt went even further. He declared that no elections would actually be held this year. He asserted that he had conducted an audit of a Vermont county and had found “60 to 70 percent fraud” going “back until at least 1975.” He suggested that China was involved in rigging elections in the Green Mountain State—as evidence, he cited photographs of Republican governor Phil Scott and other senior Vermont officials with a Chinese official. A critical player in the “cover-up,” he insisted, was a subsidiary of Dominion Voting Systems. Noting that 47 incumbent officials in Vermont have recently left office, he said with no evidence, “My theory is that they’re being arrested.”

At the end of the panel, moderator Carolyn Ryan, who works for Real America’s Voice, a conservative network that airs Steve Bannon’s daily show and has promoted QAnon material, said with great irony that each of the participants has “been labeled an extremist.” But all these Republican candidates have been swimming in the swill of QAnon. They’ve advocated disproven allegations and notions that undermine American democracy and that led to violence on January 6. Yet Finchem and Marchant continue to be competitive in Arizona and Nevada, although Karamo was down by 17 points in a poll of Michigan voters several weeks ago. Their participation in this election denialism shindig, alongside conspiracy theorists possibly more extreme than they are, was a stark reminder of what’s at stake in the midterms: Control of elections in key states could fall into the hands of conservatives who run with wingnuts and who are committed to a warped and dangerous worldview.