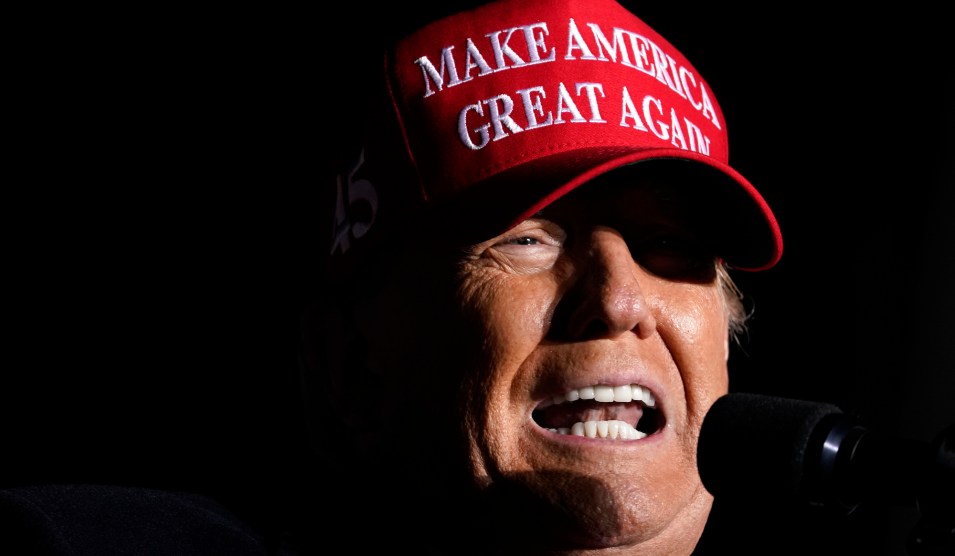 A New York judge on Thursday evening ordered that an independent financial monitor be appointed to keep tabs on Donald Trump’s business empire while state Attorney General Letitia James pursues her $250 million civil fraud lawsuit against the former president. The judge ordered the unusual move after James’ office argued that the Trumps couldn’t be trusted not to hide assets or shift them outside of the court’s jurisdiction while the legal battle plays out. Following a hearing Thursday morning, New York Supreme Court Judge Arthur Engoron agreed with James and ruled that until further notice, Trump must give him two weeks’ notice and obtain the court’s approval before moving any significant assets. Engoron ordered the monitor be appointed in order to ensure Trump complies with those restrictions.

And, Engoron added, Trump will have to pay for the monitor himself. The judge said the monitor would be appointed by the third week of November and ordered both sides to offer suggestions for who should serve in this role.

James’ lawsuit accuses Trump, three of his adult children, and a slew of his companies of committing fraud by falsely inflating the valuations of various assets they own in an effort to get better deals from banks and insurance companies—and then playing games to lower those same valuations when it came time to assess them for tax purposes. James asked for the financial monitor last month, telling Engoron that it was not clear that the Trumps had actually stopped engaging in the allegedly fraudulent behavior at the heart of the lawsuit. On the eve of James’ lawsuit, the Trumps had even created a new entity called Trump Organization II LLC, which James said could be part of a scheme to shift assets out of the court’s reach.

Trump’s attorneys told Engoron they were happy to sign stipulations about not hiding assets, but they insisted that a financial babysitter wasn’t necessary because, contrary to what James was arguing, there wasn’t serious evidence that fraud ever had occurred, much less that any fraud was ongoing. In his ruling Thursday, Engoron was fairly scathing in his response, saying the monitor was a reasonable idea “given defendant’s demonstrated propensity to engage in persistent fraud.”

Although far from any sort of definitive result in the case, Engoron said that the evidence already offered by James created a good reason to be concerned. For instance, Engoron pointed to the allegation that for years Trump told everyone—banks, insurance companies, and the media—that his triplex apartment at the top of Trump Tower was far larger and more valuable than it actually was.

“It belies all common sense to assert that Mr. Trump, who resided in the triplex for over 35 years and purports to be ‘one of the top businesspeople’ was not aware that he was over-representing the size of his home by nearly 200 percent,” Engoron wrote.

“This is just more political persecution by Letitia James, who is up for re-election in 5 days.”

Engoron also said that while James had already offered plenty of evidence of what she believed were examples of fraud, the Trump attorneys had offered nothing to counter those concerns.

“Defendants have failed to submit an iota of evidence, or an affidavit from anyone with personal knowledge, rebutting OAG’s comprehensive demonstration of persistent fraud,” Engoron wrote.

A spokesperson for the Trump Organization dismissed Engoron’s ruling as a continuation of a long-running political witch hunt.

“This is just more political persecution by Letitia James, who is up for re-election in 5 days,” the spokesperson said. According to the Trump spokesperson, there was a connection between Engoron’s quick ruling and a rally that James attended Thursday night that featured both Hillary Clinton and Vice President Kamala Harris. “Today’s decision sets a dangerous precedent for government interference in private enterprise and is an obvious attempt to influence the outcome of the upcoming election,” the spokesperson asserted.

On Wednesday evening, Trump filed a lawsuit in Florida, where he now lives, trying to get a Florida court to protect his assets from James’ lawsuit. Engoron didn’t address the lawsuit in his order, but James had complained to him about it on Thursday morning, saying it was another reason to worry about Trump possibly trying to shift assets. It’s not clear if a Florida court can actually intervene, but the Florida lawsuit—much of which read more like a Trumpian Twitter thread than a legal filing—seemed less about establishing a serious legal argument and more about making a political statement.

“As a private company, nobody knew very much about the great business that then-businessman Donald Trump had built but now it is being revealed by James and much to her chagrin,” the filing says. “The continuing witch hunt that has haunted and targeted Donald Trump since he came down the ‘golden escalator’ at Trump Tower in June of 2015 continues.”

Engoron’s ruling applies only to assets that Trump had already reported owning in 2021, and the monitor’s job is limited to keeping track of those assets. The monitor won’t have any power to interfere with the day-to-day activities of the Trump Organization. Still, Trump’s Florida suit suggested that he’s worried the order will give James and Engoron an up-close look at his finances.

“President Trump built a great and prosperous company but a company nevertheless that must be carefully, delicately, yet powerfully managed, and the appointment of a political monitor or the interference by a political hack like James who is using this lawsuit for political gain, would bring great harm to the company, the brand, the employees and its overall reputation,” Trump’s Florida suit reads.

Trump’s suit suggests that an independent monitor could undermine the value of Trump’s Florida properties, including his Mar-a-Lago estate, which the lawsuit refers to as “one of the greatest and most successful clubs in the world.” The damage, Trump warns, could be global.

“A monitor or supervisor representing a failed and poorly rated Attorney General’s office from distant New York,” ” the lawsuit argues, “would jeopardize the more than 1,000 employees that operate these properties and would totally destroy the ‘pipeline’ of future projects not only in the great State of Florida, but throughout the United States, and indeed the world.”