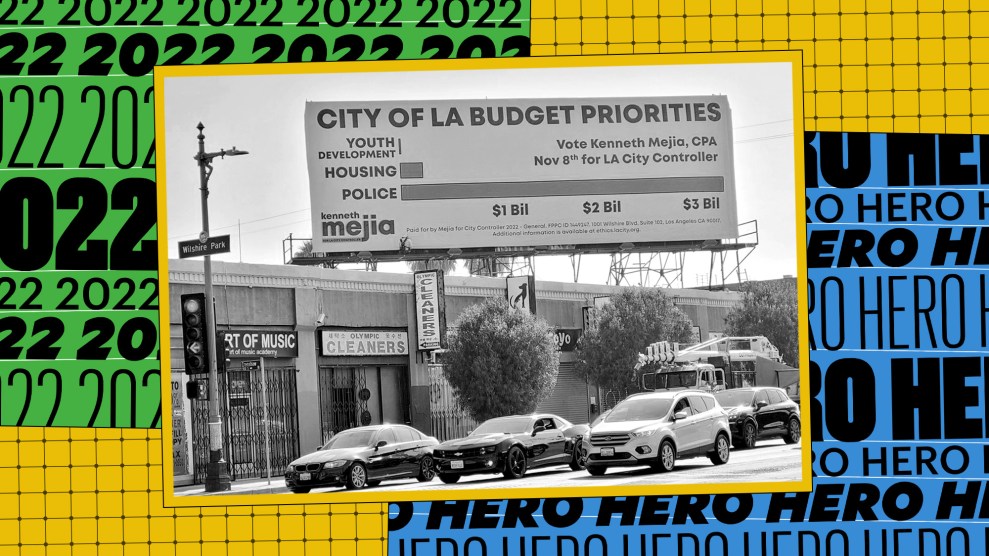 About a month after President Joe Biden declared in his State of the Union address that the answer to crime is to “fund the police, fund them, fund them,” a mint green billboard appeared above a gas station one block from a northern Los Angeles Police Department precinct. Passersby who happened to look up learned that their city government had spent $317.4 million—roughly half of its first round of American Rescue Plan relief funds—on LAPD officer salaries that year.

The billboard was the latest installment by the campaign of Kenneth Mejia, a 32-year-old Filipino accountant and affordable housing activist running for the office of city controller. After announcing his bid to become LA’s top financial watchdog last year, Mejia rolled out a series of massive public displays calling attention to LAPD funding data. One billboard, decorated with a Corgi in 8-bit sunglasses, divulged that the LAPD receives about 40 percent of the city’s cannabis business taxes. Another represented then-Mayor Eric Garcetti’s proposed $3.2 billion 2022-23 budget for cops with a bar graph stretching the length of several storefronts.

Billboards are a traditional campaign strategy, but we wanted to approach billboards in a new way. We used billboards to elevate the core values of our campaign – transparency and education.

Our billboards were designed to stand out and provide value. https://t.co/qL2ktHdv2q

The campaign drew plenty of eyeballs online thanks to its heavy TikTok presence (videos featured dancing staffers and a Pikachu costume). But the choice to put budget graphs over neighborhood arteries was far from a nerdy gimmick. It takes real guts to call out excessive police spending in 2022, amid Democrats’ “defund is dead” cacophony and a GOP-cultivated crime panic.

Since late 2020, when they nearly lost their Congressional majority, center-left Democrats have been lambasting “defund police” rhetoric, blaming their poor down-ballot performance that year on activist calls to cut police funding after George Floyd’s murder. “That’s how they beat the living hell out of us across the country, saying that we’re talking about defunding the police,” Biden told a group of civil rights leaders that December, according to the Intercept. The same month, former President Barack Obama warned young activists that “defund the police” was a “snappy slogan” that “lost a big audience.”

Over the next couple of years, personal fears and media coverage of crime soared even though rates of violent crime remained far below their levels in the mid-1990s. By this fall, the word “defund” had become politically radioactive, according to a Vox analysis of polling data, though significant majorities of US adults still supported the policy changes most activists mean when they talk about defunding the police. Poll respondents were broadly in favor of diverting some police funding to education, anti-poverty measures, and housing, as well as routing some 911 calls away from the cops. But pollsters who used the word “defund” when asking voters about such policies found that support plummeted.

In this political environment, some Democrats adopted tough-on crime positions. Others seemingly decided it was best not to talk about crime at all, much less make the case for alternative approaches to public safety. Case in point for the latter was New York Gov. Kathy Hochul, who mostly ignored the issue even as her opponent, Republican Rep. Lee Zeldin, made hay attacking criminal justice reform measures.

But Meijia’s campaign in Los Angeles, led by fellow housing justice activist Jane Nguyen, leaned into the data about exorbitant police funding. As Mejia, his team published useful data about city spending that shed light on what the cops were doing with all that money. They put out heat maps showing where police stops are most common in the city, adding the ability to sort by race (50 percent of stops involved Latinos; 26 percent African Americans). And after the city passed a strict anti-homeless ordinance, they published a mobile-friendly map for unhoused people and advocates illustrating exactly where cops could arrest people for sitting, lying, or sleeping on the sidewalk.

And when November came, Mejia walloped his opponent—beating longtime local politician Paul Kortiz by 26 points. More Angelenos voted for Mejia, in raw numbers, than for mayor-elect Karen Bass. In part, the success of his strategy probably had a lot to do with antipathy to law enforcement in LA, where scandal-plagued sheriff Alex Villanueva lost his own reelection bid after being accused of raiding the home of a political opponent and covering up for violent deputy gangs and jail guards. It also helps that the city’s budget numbers tell a particularly clear story. As one recent report identified, LAPD’s $1.8 billion in local funding this year is 29 times higher than that of the housing department, which is responsible for “livable and prosperous communities through the development and preservation of decent, safe, and affordable housing, neighborhood investment and social services.”

But Mejia’s winning campaign for a little-known, largely ignored city office also sends a broader message about the persistent public support for spending more on social supports and less on police. This has always been part of the core of “defund the police” movement, dead as politicians keep proclaiming it to be. Astronomical police budgets are always a scandal in the zero-sum game of city funding, when so many lack enough to meet their basic needs.

Mejia was sworn into office this month. Nguyen will be his chief of staff. At his side as he took the oath of office: a Corgi in a Pikachu costume, who barked and grinned.