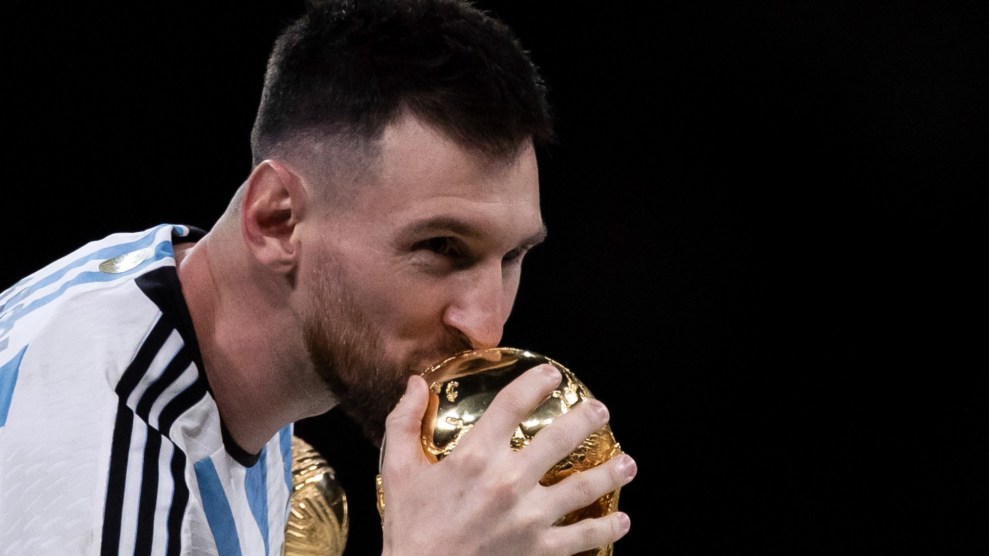 I’ve lost count of how many times I was asked the same perfectly appropriate question as the final game of the 2022 World Cup approached: Who are you rooting for? After all, I am a big soccer—I call it football, for what it’s worth—fan and closely followed the tournament. But, in my case, I imagine the inquiry also came with the reasonable expectation that, as a Brazilian, I couldn’t possibly be on the side of our regional arch-rival Argentina over the current champion France. I myself vacillated in my support as the competition progressed and my national team got eliminated. Could I possibly wholeheartedly support the hermanos toward whom some degree of animosity was instilled in me since childhood?

The source of that hostility was never very clear to me. It was like an inheritance you don’t scrutinize or reject; you just accept it. Sure, going back to history books and regional geopolitics, I could point to the disputes between our respective colonizers, Portugal and Spain, or the quest for hegemony in the 19th century that led to a short-lived war for the territory that is now Uruguay. But as I grew older and football became a bigger part of my life, I began to rationalize my negative feelings about our Southern neighbor as sports-fueled antagonism. I would religiously cheer for my Rio de Janeiro-based, red and black team Flamengo, while hoping that the Argentinian clubs would crash and burn in the CONMEBOL Libertadores cup, where the best South American clubs compete. The only thing better than winning was winning over Argentina. The second best was to see Argentina lose. Period.

At the same time, I always respected their love for the sport—one I could see mirrored in our own. When I was about 16 years old my family and I went to Buenos Aires and visited the mythical stadium known as la bombonera, which means chocolate box. This was my first visit to Argentina and the steep structure felt like the only football temple to even come close to replicating the energy of Rio’s Maracanã that I had experienced so many times. My father got me a deep-blue Argentina jersey that I don’t remember ever wearing. In my book, churrasco—Brazilian barbecue—ranked above their asado; our brigadeiro (chocolate fudge balls) were superior to their alfajores, and Pelé will always be better than Diego Maradona.

Then came the 2014 World Cup in Brazil. It had been 12 years since I had seen our captain Cafu raise the cup, bringing my dad to tears. But the sixth title never came and a devastating defeat to Germany in the semi-finals for an unimaginable 7-1 almost made me give up on football altogether. Not only had we suffered the most embarrassing of upsets at home, but we also had to suffer through Argentina making it to the final against the squad that so unceremoniously knocked us out. Germany went on to win their fourth World Cup that year, getting uncomfortably close to Brazil’s record of five. Still, I remember watching the game at a beach kiosk in Copacabana where a group of fellow Brazilians celebrated Lionel Messi’s defeat. The fall of Argentina was still a fine outcome.

And then came 2022 and Qatar. When Saudi Arabia surprisingly beat them 2 to 1 in their first group stage match this year, I felt a stab of joy. Watching them overcome Mexico, I stood on the opposite end of the bar. And when they faced Australia, I slacked my coworkers saying that I was okay with Argentina winning but wanted to see them suffer first. And suffer they did in a penalty kick shootout against the Netherlands in the quarter-finals. But, in a cruel plot twist, that same day Brazil lost to Croatia, also in penalty shootouts. And so, Argentina became the last Latin American team standing in the competition.

As my boss aptly put it during a meeting this week, I was torn between geographic loyalty and a historic rivalry. I conceded that when France scored a third goal and took the breathtaking final match to extra time I instinctively jumped off the couch in excitement. But all around me, more and more of my friends, family, and followers on social media seemed to be rallying behind our neighbors. Perhaps they saw in Messi a devoted leader who will go down in history as one of the greatest of all time; they wanted him to be rewarded with an international title. Some of them may have decided that a win for Messi’s Argentina made for a happier ending for a problematic but exhilarating World Cup. Maybe, for the first time in twenty years, they would rather have had a victorious non-European team. Or perhaps, like me, they were just glad to see a region constantly afflicted by political turmoil, anti-democratic threats, and bitter polarization simply succeed.

At a holiday party last week before the final, someone almost apologetically introduced me to their Argentinian plus one. When they asked me how I was feeling, I told them I was happy for their achievement. And for the first time in my life, I think I actually meant it.