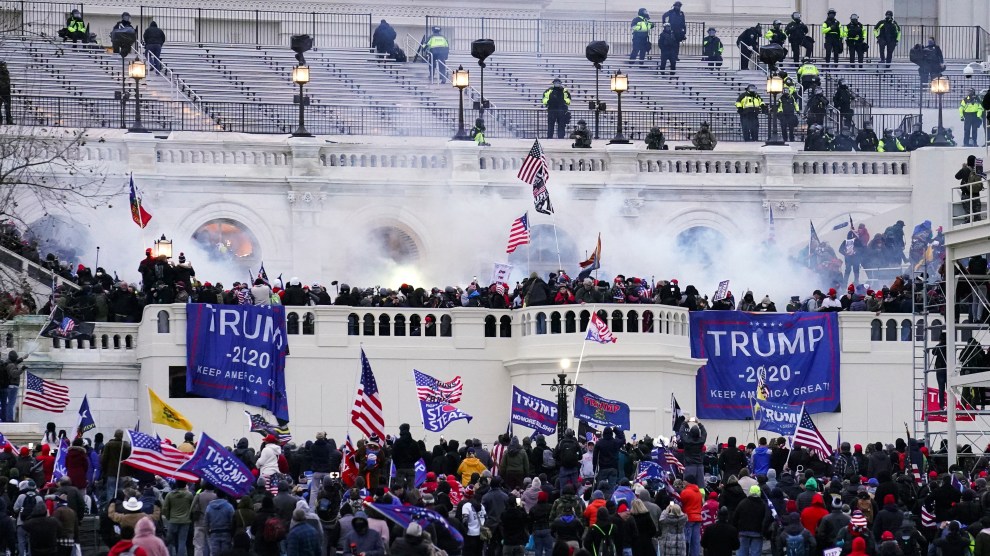 It has been nearly two years since organized far-right extremist groups and others who believed the lie that the 2020 election was stolen went to the US Capitol and unleashed violence and destruction. On Monday, the bipartisan House committee investigating the January 6 catastrophe is expected to take action against its prime instigator, Donald Trump, by making a criminal referral to the Department of Justice. The committee is set to urge at least three kinds of charges for the former president: obstruction of Congress, conspiracy to defraud the United States, and insurrection.

The criminal referral is non-binding. But it is a major symbolic action against Trump, who is again seeking the Republican nomination for president, and it will stand as an important rebuke of a violent domestic-extremism movement.

Meanwhile, federal charges unsealed on Friday in a January 6–related case reiterated the scope and seriousness of the ongoing threat fueled by MAGA extremism. The DOJ alleged that a Tennessee man arrested last May in connection with the assault on Congress has since plotted to murder FBI agents who investigated his actions on January 6. Edward Kelley, 33—who the DOJ previously said assaulted police and was among the first to violently breach the Capitol Building—allegedly conspired with another individual to attack an FBI field office in Knoxville. According to the complaint, a witness told investigators that Kelley spoke of collecting intelligence on law enforcement agents involved in his case and had a hit list that he and co-conspirators would use to “conduct recon missions and assassination missions.”

The case has echoes of a disturbing attack in August, when a diehard Trump supporter armed with an AR-15 attempted to breach an FBI field office in Cincinnati and later died in a shootout with law enforcement. That and other recent events exemplify the continuing danger stemming from a long-running campaign of incitement by the former president, which to this day has seen almost no serious pushback from anyone in the Republican Party. The latest manifestation of the peril was the brutal attack in late October on House Speaker Nancy Pelosi’s husband at the couple’s San Francisco home.

Additionally, reporting from Yahoo News last week further brought to light a profoundly troubling investigation at the Department of Homeland Security from last March. The unredacted version of that inspector general’s probe reveals that security officials had specific, highly alarming intelligence about January 6 well in advance but failed to act on it—despite repeated efforts by an analyst to sound the alarm.

“On the morning of January 6th, 2021,” the DHS analyst later disclosed, “I made one more phone call begging for us to be given the intelligence reporting that we needed desperately which could have been used to inform those on the ground of the full kinetic threat and allow for threat postures of US Capitol Police to be adjusted….the reporting did not publish till after the attack on the US Capitol was already well underway and too late to effect tactical law enforcement operations on the ground.”

That news underscored questions that are still unanswered about the actions and communications of security leaders in the US government around January 6. As one threat expert told me a week after the insurrection, “Either they were complicit or willingly ignorant of what they needed to do to prepare.”

By this Wednesday, the House committee is set to release a lengthy report on the insurrection and what led up to it. The report will be a culmination of the committee’s work, whose pre-Christmas timing was forced by the GOP taking control of the House in the new year, when the committee is all but certain to be shut down. But there can be no doubt that this crucial story is far from over. Nearly 1,000 people have now been charged in connection with the events of January 6, and many additional arrests are likely. Criminal accountability may eventually also come to include some Trump allies and perhaps even the former president himself.