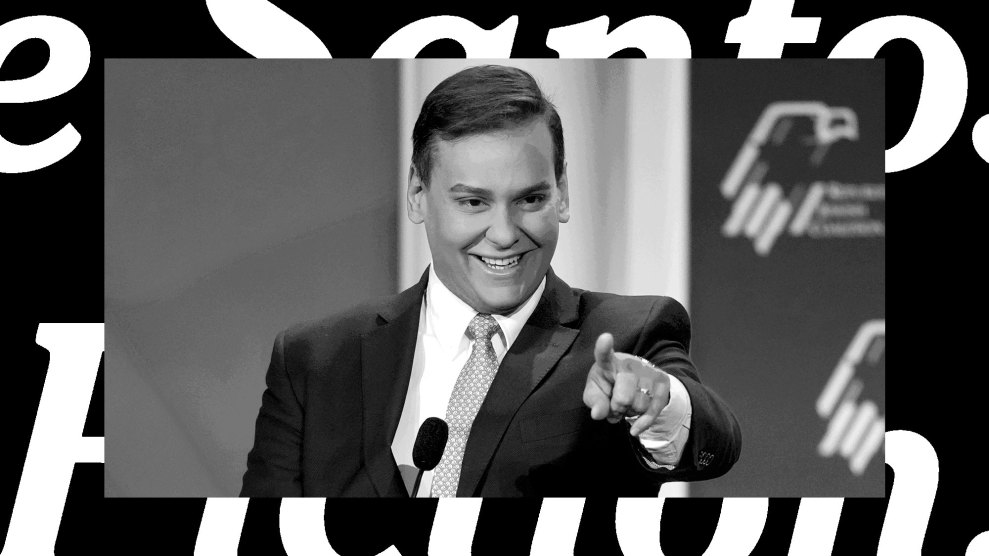 On Monday, the New York Times published an explosive story revealing that George Santos, a New York Republican elected last month to the House of Representatives, had made what appeared to be brazenly false statements about his background, including assorted claims about his business career. He had boasted of being an accomplished investor and financier who had worked at Goldman Sachs and Citigroup. Yet each firm noted it had no record of his employment there. He had said he graduated from Baruch College. The school said he had not. His personal finances seemed odd as well, and he had worked at a Florida company called Harbor City Capital that was accused by the Securities and Exchange Commission in 2021 of running a $17 million Ponzi scheme. Subsequently, he supposedly made at least $3.5 million from a mysterious company, called Devolder Organization LLC, that he started, that had no public profile, and that was dissolved soon after it was created. This marked a dramatic shift from his first run for Congress in 2020, when he reported earning $55,000 per year.

The day after the Times story appeared, Santos took a curious step: He revived that mystery firm that he had claimed as the source of millions of dollars of income, and he listed as its address a Florida property associated with a former top official of the company that allegedly mounted that Ponzi scheme. Devolder’s resurrection was first reported by Talking Points Memo. The story of this firm is a key component of the Santos scandal.

The Times article cast Santos as a modern-day Mr. Ripley who seemingly had manufactured a rags-to-riches public persona based on audacious lies. He was once arrested in Brazil for forging checks. He boasted he founded an animal rescue charity, but the outfit barely existed and was not registered with the IRS as a nonprofit. (The intended beneficiary of one of its events reported never receiving the funds from a fundraiser Santos’ group helped to organize.) Before the election, Santos said he owned a “Hamptons mansion” worth $10 million, but according to his financial disclosure filings he owned no real estate at the time. (He was then renting an apartment in Queens.) All the unsubstantiated claims have prompted questions about his financial and business dealings, including Devolder and his interactions with Harbor City and its principals.

After working at a firm that ran conferences for investors—and earning a $55,000 salary there—Santos in July 2020 was hired as a New York regional director for Harbor City, which sought investors for a business generating digital customer leads to sell. In a press release announcing this move, JP Maroney, Harbor City’s CEO, said he had known Santos for years and called him a “perfect fit.” At the time, Santos was mounting his first bid for Congress in Long Island, which he would lose that November.

When Santos joined Harbor City, the company was already in trouble. Weeks earlier, the Alabama Securities Commission had prohibited Harbor City from doing business in the state. It alleged that the company was run by “fraudsters” who were “out to deceive Alabamians and profit off unsuspecting investors by using dazzling marketing tactics to sell unregistered bonds.”

In April 2021, the SEC filed its complaint charging that the firm and Maroney had mounted an extensive Ponzi scheme. The agency maintained that Maroney pocketed more than $4.8 million of the $17.1 million he raised from investors and used that money to pay $1.35 million in personal credit card bills, buy a $90,000 Mercedes-Benz, and purchase a waterfront home. The only other person named in the complaint was Maroney’s wife. No other Harbor City employees were implicated. In October, Maroney, who is representing himself, requested a stay in the SEC action against him and Harbor City, noting that he “is currently the target in a related criminal investigation.” Maroney did not respond to messages requesting comment.

Santos has said he was unaware of the alleged Ponzi operation.

Scott Silver, a Florida attorney who has represented Harbor City investors allegedly bilked, said there should have been many red flags for Santos and other employees. “Any person from the financial services industry, who went to work for a company like Harbor City, should immediately have recognized that Harbor City wasn’t properly registered as a financial services company,” Silver told Mother Jones. “Even if you didn’t know the company was operating as a fraud or a Ponzi scheme, a sophisticated person affiliated with the company should have known they weren’t licensed to do what they claimed to be doing.”

Weeks after the SEC leveled its accusation against Maroney and Harbor City, Santos formed Devolder Organization LLC and incorporated it in Florida. (His full name is George Devolder-Santos.) The registered agent for Devolder was D&D International Investment Services. That company is run by DeVaughn Dames, who served as Harbor City’s chief financial officer. Around the same time, Dames also formed a company for another Harbor City exec, Paul Nicolini.

When Mother Jones called a number associated with Nicolini, the person who answered immediately hung up after hearing Santos’ name.

What Devolder did is unclear. On a campaign website in 2021, Santos described it as his family’s firm and said he was a managing member who oversaw “asset allocations” of $80 million. There is nothing in the public record that explains how he and his family supposedly came to oversee such a large fortune. The Times reported that Santos was evicted from apartments in Queens in 2015 and 2017. (He later claimed to be a landlord impacted by a New York eviction moratorium, though his financial disclosure filings contained no information indicating he owned property in the United States.)

In April 2022, Santos provided a different description of Devolder to the Daily Beast. He said he had started Devolder to help “all the people who were left adrift [by Harbor City].” He also said that the firm had by then been dissolved.

On the financial disclosure form Santos filed in September 2022, he characterized Devolder in yet another way, calling it a “Capital intro consulting company.” He stated that he had earned $750,000 in salary and between $1 million $5 million in dividend income from Devolder in 2021 and the same amounts in 2022. This means he claimed he pulled in between $3.5 million and $11.5 million from a firm that existed less than a year, that produced no public signs of any work, not even a website, and that he has not described consistently. Santos also stated on his 2022 form that he had a checking account worth between $100,000 and $250,000 and a savings account worth between $1 million and $5 million. His 2020 financial disclosure form listed no such accounts and no such assets.

As the Times noted:

The Devolder Organization has no public-facing assets or other property that The Times could locate. Mr. Santos’s disclosure form did not provide information about clients that would have contributed to such a haul—a seeming violation of the requirement to disclose any compensation in excess of $5,000 from a single source.

Kedric Payne, the vice president of the watchdog Campaign Legal Center, and a former deputy chief counsel for the Office of Congressional Ethics, was one of three election law experts consulted by The Times who took issue with the lack of detail.

An online biography for Dames, whose company served as the registered agent for Devolder, described Dames as a “seasoned executive with investment experience and more than $1.5 billion in transactions between the Bahamas and the USA.” Dames did not respond to requests for comment from Mother Jones.

Whatever the source of the money Santos received from Devolder, he used his newfound wealth to lend his winning 2022 campaign $700,000.

Santos did not respond to multiple requests from the Times for information about his background and career. His lawyer, Joe Murray, posted a statement on Twitter saying that the Times was attempting to “smear [Santos’] good name” with “defamatory allegations.” But Murray provided no support for any of his client’s implausible claims.

According to Florida corporate records, he reinstated the firm on Tuesday. On the filing he submitted, he reported that the company was based at a Merritt Island, Florida, address that corresponds to a property owned by Jayson Benoit, who was the former chief technology officer of Harbor City.

Benoit runs a firm called Jayson Benoit and Associates that has provided website services to a pro-Trump political action committee called Republican Reset PAC. (The main strategic consultant for this PAC is Resilient Patriot, a firm headed by Michael Flynn, the former national security adviser to Donald Trump.) Benoit did not respond to an interview request.

According to Florida business records, Santos and Benoit have also both been managers of a political consulting firm called Red Strategies USA, another Florida-based company set up by Dames in the weeks after the SEC exposed the alleged Ponzi scam at Harbor City. Two other Harbor City alumni were listed as authorized managers of Red Strategies: Dames and Nicolini.

Red Strategies worked on the campaign of Tina Forte, a Republican who unsuccessfully challenged Rep. Alexandria Ocasio-Cortez (D-N.Y.) in the recent election. Forte’s campaign paid Red Strategies USA $110,000 between June 2021 and December 2021 for “digital consulting and fundraising,” according to campaign finance records. The firm was dissolved in September before the election was over.

Mother Jones sent a list of questions to Santos and Murray, his attorney, regarding Devolder, the firm’s reinstatement, and Santos’ personal finances. “I’m not going to be able to respond,” Murray replied.