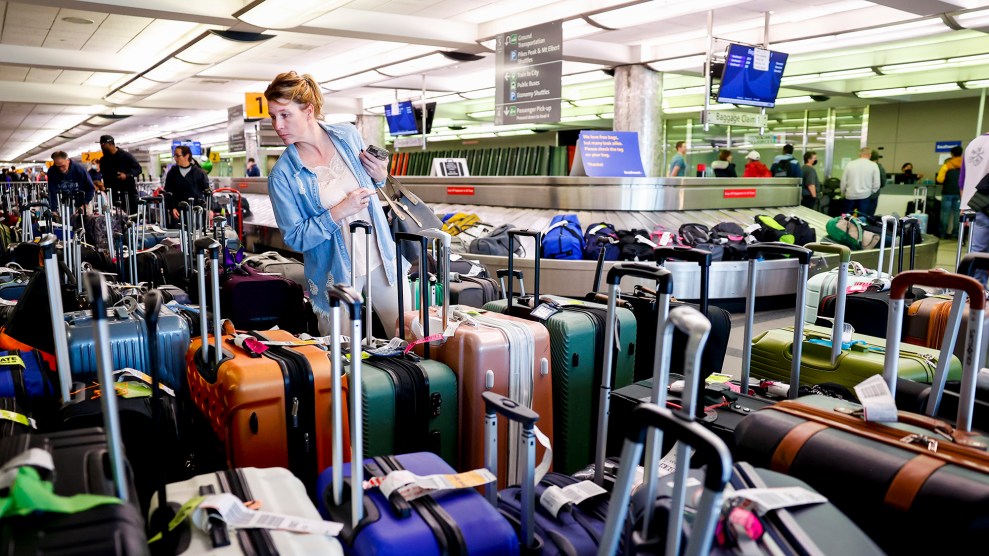 A traveler searches for a suitcase in a baggage holding area for Southwest Airlines at Denver International Airport on December 28, 2022. More than 15,000 flights have been canceled by airlines since winter weather began impacting air travel on December 22.Michael Ciaglo/Getty

Between hotels and car rentals, 33-year-old Steven Murray spent more than $1,400 getting his family of seven home to Atlanta after a holiday trip to New York City. That was on top of the $800 they initially spent on Southwest flights, which were canceled. They have yet to see any reimbursement. The $500 rental van they found to get them back to Georgia this week didn’t have enough room to fit one passenger’s wheelchair, so they had to throw it away and carry the 63-year-old wheelchair user to the restaurants and restrooms where they stopped during their 16-hour drive home.

Zach Shaw, a 24-year-old who does public relations work in Chicago, was trying to get from Ohio, where he was visiting family, to New Year’s celebrations in Miami, Florida. Southwest canceled his flight without giving him any option to rebook, while other airlines priced him out of making it to Florida at all. Had a family member not offered him a ride back to Chicago, he would have had to come up with $5,000 for a new flight or nearly $4,000 for a rental car.

Meanwhile, the mother of a 23-year-old member of the US Air Force had to shell out $800 in American Airlines tickets to get her son home on December 26 after Southwest stranded him in three different airports over three days, including Christmas Day. He was not offered a hotel, a refund, or even a bottle of water, says his mom, Kerri, who asked Mother Jones not to publish their last name because of Air Force policies. Kerri hopes Southwest will refund her son’s initial Southwest flights and at least some of the American flights, but “no amount of money replaces the time he and we as his family lost,” she says.

“No amount of money replaces the time he and we as his family lost.”

These three families are part of a massive, disgruntled club of Southwest passengers. First, extreme weather forced the airline to drop flights, but even after the weather stabilized, the problems continued. The airline canceled more than 2,900 flights on Monday, and roughly 2,500 each on both Tuesday and Wednesday, according to flight tracker Flight Aware. If all of those flights were full—as many usually are around the holidays—that could represent around 1,264,000 customers who, by and large, were simply shit out of luck.

Once Southwest was the fun, passenger-friendly carrier known for low fares, festival-style seating, and a liberal 2-free bag policy. But during the Christmas holidays, it scrapped more than 60 percent of its scheduled flights, separated thousands of passengers from their bags, and is struggling to maintain customer service helplines. Southwest said it would be several more days before it can resume normal operations. In a video statement Tuesday, Southwest CEO Bob Jordan said he is “truly sorry” for the stress it has put on passengers and staff. Jordan added that he hopes Southwest will “be back on track before next week.”

But does Southwest Airlines legally owe anything to these people who slept on airport carpets, survived off overpriced and under-seasoned airport food, and missed out on rare celebrations with families and friends?

The simple answer is not much.

In the US, airlines are only required to refund passengers the cost of their canceled flights—and in some cases, money for lost or damaged baggage—but there isn’t a set federal rule mandating a deadline for reimbursement. Nor are carriers legally required to provide overnight accommodations, or meal vouchers, according to US Department of Transportation guidelines. Some airlines indicate in contracts that they will try to put stranded travelers up in hotels, but only if rooms are available. While this was not historically Southwest’s policy, the airline says it will honor “reasonable” reimbursement requests for costs accrued from hotels, meals, and alternate transportation through at least January 2.

That means, generally, you are not legally entitled to compensation for that $50 Lyft you took to the airport, or—after any hope of getting to your destination has long been abandoned—for that $100 surge-price Uber you took home twelve hours later. You are not guaranteed a check for the $18.50 burger you ate at the sticky airport bistro, nor the two $14 glasses of merlot you drank to drown your sorrows.

But if you lived in the European Union, you’d be covered by something called the Air Passenger Bill of Rights. Since 2004, air passengers who live and fly throughout the 27 EU countries have been entitled to additional compensation beyond their ticket price when their flights are delayed more than three hours or canceled within 14 days of takeoff due to reasons within the airlines’ control. The amount of compensation depends on the length of the flight but typically ranges between €250-600—or from $265 to $637.

Canada pays up as well. Beginning in 2019, our neighbor to the North started assuring compensation ranging from $400 CAD ($293 USD) for short delays to $1000 CAD ($735 USD) for delays of nine or more hours to the passenger’s final destination. Smaller airlines pay only smaller reimbursement rates, and certain conditions, like extreme weather, are a carve-out.

US Transportation Secretary Pete Buttigieg has vowed to hold Southwest accountable for the days-long delays and cancellations. “I made clear that our department will be holding them accountable for their responsibilities to customers,” he told CNN, “both to get them through this situation and to make sure that this can’t happen again.”

But even before the Southwest debacle, there was a growing movement to hold US airlines accountable for extreme and preventable passenger inconveniences.

Rep. Katie Porter, a California Democrat, recently introduced a bill requiring airlines to refund travelers within 14 days of canceling or significantly changing their flights. And late last year, Democratic Senators Richard Blumenthal from Connecticut, Ed Markey from Massachusetts, Oregon’s Sen. Ron Wyden, Bob Casey, Jr. from Pennsylvania, and Sheldon Whitehouse from Rhode Island, introduced separate legislation that would require airlines to provide ticket refunds, alternate transportation, compensation, plus meals and lodging for particularly bad delays. The bill would also require the Department of Transportation to help airlines communicate with one another in order to help place passengers on alternative flights, when necessary.

Such bills would have to be reintroduced in the new Congressional session to advance, but the pressure is mounting now. As a result of all the flight issues this week, Senator Maria Cantwell (D-Wash.), chair of the Senate Commerce Committee, says the committee will look into regulation. “Consumers deserve strong protections, including an updated consumer refund rule,” she tweeted Tuesday.

Some experts worry that creating such policies would raise prices, ultimately harming consumers more in the long run. Clifford Winston, a senior fellow at Brookings, analyzes transportation and regulation. He suggests the better option might be to let market forces penalize Southwest rather than the government. “The best thing government can do is leave Southwest alone,” he says. “They’ve learned their lesson. They know what they’ve done. They’re gonna feel it in their stocks. They’re gonna feel it in their revenues.”