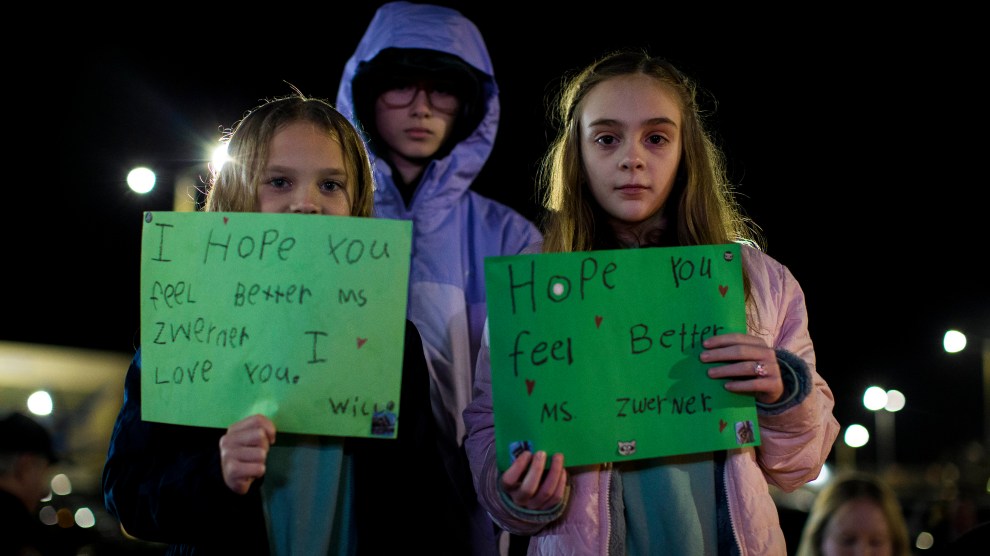 Before a 6-year-old intentionally shot his teacher in Newport News, Virginia, last Friday, school officials learned that the boy may have had a gun in his possession but failed to find it, the school system’s superintendent said late this week.

According to reports from a local TV station and the Associated Press, superintendent George Parker said during an online meeting with parents Thursday night: “At least one administrator was notified of a possible weapon in the timeline that we’re reviewing and was aware that that student had, there was a potential that there was a weapon on campus.”

An attempt to find and confiscate the gun, Parker added, was unsuccessful. “The book bag for the student was searched after it was reported that he potentially had a weapon,” he said.

Key details about the circumstances leading up to the shocking act of violence remain conspicuously unclear. Inside a classroom just before 2 pm, the boy brandished a Taurus 9 mm pistol and fired a single shot, seriously wounding 25-year-old teacher Abigail Zwerner in the hand and chest. Zwerner helped evacuate students from the classroom while another school employee restrained the boy and awaited police; Zwerner soon collapsed and was taken to a hospital, where she is in stable condition.

The Newport News police chief stated during a press conference earlier this week that the child had obtained the gun at home and had “placed it in his backpack and brought it to school.” The gun was legally purchased by the boy’s mother, the chief said, adding that she had brought him to school that morning. There is no public indication yet of what led the boy to open fire in an incident that authorities said was “unprovoked.” (Authorities have not disclosed the identities of the boy or his mother.)

Reactions from school and government leaders to this “unprecedented” event, as the police chief called it, are continuing a long-familiar pattern. The focus is heavily on beefing up physical security. The chair of the local school board announced immediate plans to install up to 90 “state of the art” metal detectors in the district’s schools. Republican Gov. Glenn Youngkin called for greater police presence in Virginia schools, telling the editorial board of the Washington Post, “One of the key concerns I have is I wasn’t able last year to get school resource officers in every school. We didn’t get them in every elementary school and we should.” Youngkin told the Post he would seek new funding to make that happen.

Elected officials have emphasized these kinds of policy moves for more than two decades, ever since the mass shooting at Columbine High School in 1999. There is little reason to think they will work. As I document in Trigger Points, my book about preventing mass shootings through the use of behavioral threat assessment programs, the nation has seen multiple waves of such “target hardening” measures put in place. A surge follows every high-profile massacre, including more recently after Sandy Hook in 2012, Parkland in 2018, and Uvalde last year.

“Unfortunately, these responses are not likely to be effective in preventing planned attacks,” a group of leading threat-assessment experts wrote not long after Columbine, based on groundbreaking research into targeted violence in schools.

Nonetheless, the prioritizing of reactive measures—conducting active-shooter drills, arming teachers and implementing various other forms of physical security—goes on. Many schools are more fortified than ever. If these measures worked, however, the frequency of school shootings would not have significantly risen. The disaster with the massive police response in Uvalde only further underscored this point.

With this latest astonishing tragedy in Virginia, details remain unknown as to how school officials learned about the possible gun and why they failed to find it with the search of the child’s backpack. But we now know explicitly that there may have been opportunity to intervene. This points once again to the need for far greater investment in community-based violence prevention work, including threat assessment teams.

Such work relates directly to questions about how the boy got the gun from his home, and whether or not its owner can now be held legally accountable. As I wrote earlier this week, authorities have not yet decided whether to charge anyone in connection with the shooting—but Virginia has no laws requiring gun owners to lock up or otherwise safely store unattended firearms. That’s despite the fact that school shootings frequently are carried out with weapons that kids obtain from their own homes, and that young children shoot people far more often in the United States than is widely understood—whether accidentally, or in rare cases, intentionally.