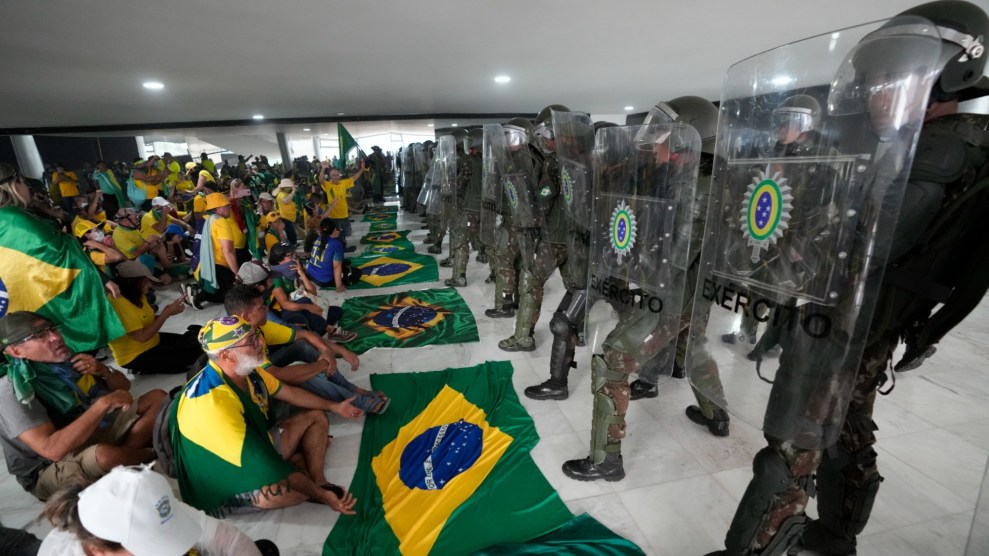 On Sunday, in Brazil’s version of the January 6 insurrection, thousands of supporters of defeated former President Jair Bolsonaro staged a coordinated assault against the country’s democratic institutions and three branches of government. On the grounds of Brasília’s Three Powers square, insurrectionists stormed and trashed the Supreme Court, the Palácio do Planalto, and Congress buildings, as they called for military intervention and promised not to leave without engaging the support of the Army. When the military finally arrived at the scene, Bolsonaro supporters, many of whom had been camping outside the Army headquarters, applauded and celebrated, assuming that new allies were joining them, only to watch their heroes dismantle their encampments. “Until an hour ago we trusted the Army would protect us,” one tearful insurrectionist said in a self-recorded video. “The Army turned us in.”

In another example of ironic and unintended consequences, these pro-Bolsonaro agitators could face criminal charges based on legal provisions that were put in place under the Bolsonaro administration. In September 2021, the now-former president signed a law passed by Congress repealing the 1983 Brazilian National Security Law, a legacy of the military dictatorship (1964–1985). In its place, they added a provision on “crimes against democratic institutions” to the Penal Code. Now, several criminal experts interviewed by Brazilian media say the January 8 rioters could be prosecuted under two articles in the Penal Code: “Trying, by using violence or serious threat, to abolish the Democratic State of Law, preventing or restricting the exercise of constitutional powers,” and the “attempt to depose, by means of violence or grave threat, the legitimately constituted government.” The first can trigger a punishment of four to eight years in prison and the second up to 12 years.

In addition to crimes against the democratic institutions, the insurrectionists could face charges for more than a dozen infractions, including damage to public property, criminal association, and inflicting bodily injury. Some legal experts and lawmakers have also suggested that authorities who failed to prevent and stop the attack, as well as those who incited and abetted it, should be investigated for potential crimes of responsibility.

The previous National Security Law defined crimes committed against national sovereignty and the political and social order, including slandering or defaming the president. During the military dictatorship, the law was enforced against opponents of the regime. Since Brazil’s re-democratization period, however, it was infrequently enforced, and when it was, it targeted leaders of social movements such as Brazil’s Landless Workers Movement.

Then Bolsonaro came into power. The first two years of his administration saw a record number of cases based on the legislation, in some instances to investigate journalists, professors, and critics of the government. It has also been invoked to target for investigation some Bolsonaro allies and supporters over attacks against Supreme Court justices and organizing anti-democratic demonstrations, plus the mentally ill man who stabbed the then-presidential candidate at a 2018 rally.

The law’s residual link to authoritarianism, and excesses derived from the law’s use, prompted criticism by civil rights groups and jurists and calls for it to be modernized. But upon sanctioning the legislation that revoked the National Security Law, Bolsonaro vetoed one provision that would have tackled the spread of fake news by punishing “mass misleading communication” and another that criminalized attacks on the right to demonstrate. He also vetoed a provision to enhance penalties for members of the military or public officers who committed crimes against the state. Since Sunday’s attack on Brasília, where part of the security forces stood by as rioters stormed and ransacked three government buildings, some senators are reportedly considering a vote to override that veto.