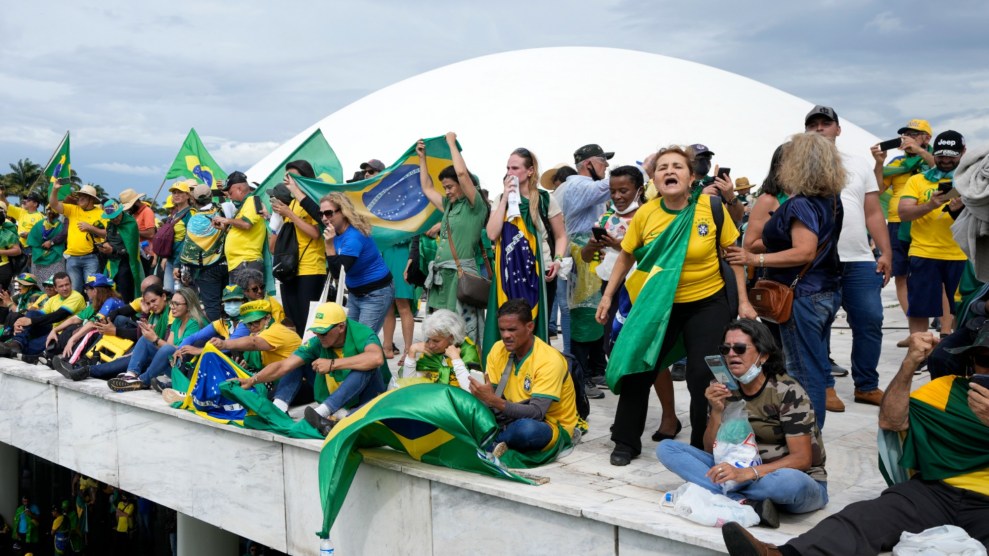 Supporters of Brazil's former President Jair Bolsonaro, stand on the roof of the National Congress.Eraldo Peres/AP

Two years and two days after the invasion of the US Capitol by pro-Trump insurrectionists, much of the world appeared to be astonished as an angry mob stormed Brazil’s seat of power, calling for a military intervention and attacking the congressional building, the presidential offices, and the Supreme Court. David Nemer, a Brazil-born assistant professor at the University of Virginia’s Department of Media Studies, monitors far-right channels on social media, and, for him, the mob’s violence was a tragedy foretold. In an interview on January 8, 2021, for the Brazilian nonprofit investigative publication Agência Pública, Nemer predicted a January 6-like event was bound to happen in Brazil. “If [Jair] Bolsonaro loses the [next] elections they won’t accept it,” he said of the defeated former president’s supporters, “and the same thing will happen.”

Exactly two years later, Nemer was proved to be right, but for those paying attention, it wasn’t hard to see it coming. As I wrote last week, the anti-democratic coordinated effort on January 8 has been long in the making, and plans for the invasion itself were openly discussed online. More than 1,300 people have been arrested in connection with the attack. They could be facing charges that include “trying, by using violence or serious threat, to abolish the Democratic State of Law, preventing or restricting the exercise of constitutional powers” and the “attempt to depose, by means of violence or grave threat, the legitimately constituted government.” As the country grapples with the aftermath of the insurrection, Mother Jones spoke with Nemer about the warning signs that made it so predictable, and what Brazil can learn from the United States.

You were in the US on January 6, when the invasion of the Capitol happened. What was it like to see something similar happen in your home country?

I wasn’t totally surprised. I’ve been monitoring the far right on social media—Twitter, WhatsApp, and Telegram—both in Brazil and the United States. We know there is a connection between the Brazilian far right and Trumpism. On December 19, Trump summoned his supporters to go to Washington, DC, on January 6 saying there were going to be “wild” protests. And then later we saw the domain “wild protest” registered and several accounts start to call on extremists to go to DC. So, I was already anticipating something, not necessarily like the invasion of the Capitol, but some violent act. I was thinking of going to DC to monitor because several leaders of the Brazilian far right were there on January 6, for example, [President Bolsonaro’s son] Eduardo Bolsonaro, and [far-right blogger] Allan dos Santos. On the way there, when I saw things were getting out of control, I decided not to go for obvious reasons.

“From the ascension of Trump and Bolsonaro to how they handled the pandemic, Trump’s fall then Bolsonaro’s fall, the way they questioned the electoral system, the insurgencies—all very predictable.”

What took place in Brazil [on January 8] was a cheap replica. Right after January 6, the Shaman became very symbolic, and soon after in Brazil during an antidemocratic demonstration [on September 7, 2021] there was a Brazilian version of the Shaman. Everything that happened in the United States, happened in Brazil two years later; it was inevitable. From the ascension of Trump and Bolsonaro to how they handled the pandemic, Trump’s fall then Bolsonaro’s fall, the way they questioned the electoral system, the insurgencies—all very predictable. I was seeing it all unfold and planned on WhatsApp and Telegram groups. It was all out in the open, no one was hiding anything. I gave an interview to Agência Pública following the US insurgency saying two years from now you can be sure this will happen in Brazil. When I said I knew this was going to happen, it wasn’t based on a gut feeling. It was because I was seeing it being orchestrated from inside these groups calling for something similar to January 6.

Your prediction proved eerily accurate. What were the warning signs in Brazil and how did the movement grow from the trucker protests on Independence Day in 2021 to the thousands of people we saw storming Brasília?

We had these extremists camped outside the Army headquarters asking for military intervention all the time. The whole time these people were open to this kind of terrorist attack. On Telegram groups, for instance, they circulated messages like “if you’re in the state X, contact this person, here is their number.” Each state had at least three points of contact as well as information on the best bus routes to get to Brasília. Everything was done with lots of accessibility so that those people could go. The calls to action were very intense in these groups.

Did you find any direct references to the United States and the Capitol invasion?

There were not that many mentions of the United States or something that showed a direct motivation. As we know, the American insurgency failed, it didn’t work. Because it was considered a defeat, I believe that discouraged the Brazilian insurrectionists from creating a connection and saying “let’s do like in the United States”—where the FBI went after everyone. But it was definitely influenced by the US experience, including by the date. In Brazil, it didn’t take place on January 6 because that was a Friday and there would be more police officers and movement on the streets unlike on Sunday, which would make the invasion easier. We can’t know for sure, but it certainly is a symbolic date for what happened in the United States. There is a lot of interest in knowing whether there was help from Steve Bannon or Jason Miller and who is behind it. So far, I can’t see any direct connection in terms of coordination. But it is undeniable that Bolsonaro and the “Bolsonarism” movement have been following Bannon’s playbook.

Even leaders of the global far right have criticized the attacks in Brasília. Do you see the “Bolsonarism” movement running out of steam after what happened?

There is an intense desire to create this type of global movement. We see that through CPAC, which has gone international and was taken to Brazil by the Bolsonaros. These attacks might not be seen as successes but as evidence of the growth and continuation of a movement. That’s how they look at it. The pawns who were there on the frontlines might have believed they were going to retake power, but the people behind this know the idea is to bring this sentiment to the surface and motivate other groups to carry out the same acts in different places. Their goal is to feed the conservative movement and promote an anti-progressive agenda. There is an idea that other countries where the far right is well rooted—India, Poland, Hungary—might go on to stage this type of theater. The Bannon playbook lays out the course of action very clearly. Unfortunately, Brazil is a major laboratory for the global far right. Usually, every time a more extremist event takes place, support for “Bolsonarism” dwindles, but it becomes more radical to the point of doing what they did [on January 8].

You monitor more than 100 pro-Bolsonaro groups on social media platforms. What are you seeing now in the aftermath of the attack?

The discourse isn’t unified. Some groups saw what happened as a victory and fuel to keep trying to retake power. Others tried to distance themselves from it saying they were only there to protest peacefully and that the violence was perpetrated by infiltrators from the left. That was a very similar strategy to January 6 when they said Antifa was behind it.

US and Brazilian lawmakers have issued a joint statement condemning the attacks and there are reports of a potential collaboration to investigate the Brasília attack. What can authorities in Brazil learn from the post-January 6 reckoning?

Talks are already taking place to set up a congressional investigation to examine these terrorist attacks. The more transparent and accessible to the public the better. There is a pedagogical power to every judgment so that it won’t happen again. In the United States, many people wanted an immediate answer to those involved on January 6, and the FBI took their time to go after everybody—and little by little they did. They didn’t engage too much with this immediate craving for justice but they were efficient in bringing everyone to a trial, including the Proud Boys for charges of seditious conspiracy. I think that’s the biggest lesson. There is popular fervor but it is important to be patient and take the time to get to the brains behind it.