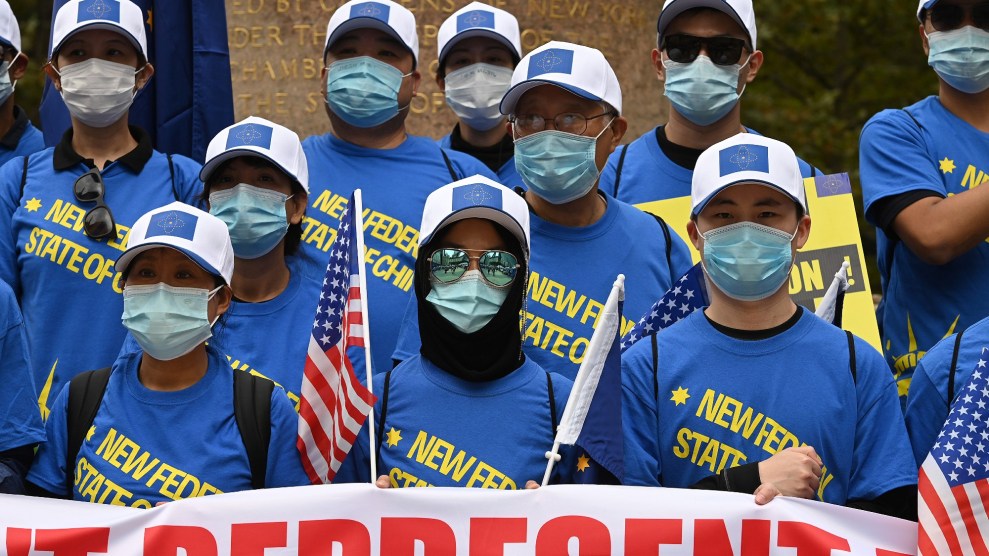 A federal bankruptcy judge slapped exiled Chinese mogul Guo Wengui with new restrictions this week after finding that Guo had defied an earlier order to stop a harassment campaign by his fans aimed at lawyers for his creditors.

Guo, an ally and patron of Steve Bannon, fled China in 2014 ahead of corruption charges. In the United States, Guo has become a booster of Donald Trump and a financier of far-right conspiracy theories. In 2020 he spread lies about Hunter Biden, helped to finance efforts to overturn the 2020 election, and underwrote discredited claims that Covid is a Chinese bioweapon.

Guo filed for bankruptcy last year in Connecticut, claiming to have almost no assets, even as he continued to boast about his luxurious lifestyle and to solicit investments in companies he appears to oversee. Guo also leads what he calls a “whistleblower movement” that includes thousands of fans around the world who are drawn to his claims to be a leading opponent of the Chinese Communist Party.

“The irreparable harm continues to occur.”

As part of the Chapter 11 bankruptcy process, lawyers for Guo’s largest creditor and attorneys for a court-appointed trustee representing other creditors have been trying to find assets that they assert Guo is hiding from the court. Guo’s reaction to these efforts has been to accuse these lawyers of acting as agents for China’s government and of committing extortion, along with other outlandish allegations. Guo has also encouraged his supporters to protest opposing lawyers at their offices and homes, the bankruptcy judge, Julie Manning, said in a ruling on Wednesday.

Egged on by Guo, his fans doxed not only lawyers he was targeting but also their children and family members, including the daughters and ex-wife of the bankruptcy trustee, Luc Despins of the law firm Paul Hastings. Guo “supports, encourages, and is the leader of a social media and protest campaign targeting the plaintiffs, their counsel, and their relatives, at personal homes and workplaces,” Manning wrote.

Flyers distributed outside Paul Hastings’ Manhattan and Washington offices attack Despins as a “running dog” for China’s Communist Party and superimpose a hammer and sickle symbol over his face.

As I have previously reported, Guo has overseen similar protests against critics, invariably accusing them of working for the CCP. And he has regularly paid protesters to take part, often using funds from nonprofit organizations he and Bannon set up in 2019.

Manning in November issued a temporary restraining order limiting protest activities by Guo’s backers that interfered with the bankruptcy case. Manning’s new order bars Guo’s agents from protesting outside the homes of the bankruptcy trustee and others and also restricts what they can post on social media. Guo’s lawyers argued these restrictions violated his First Amendment rights. But Manning said she was balancing those concerns against the interests of the Chapter 11 proceedings.

Manning found that the harassment campaign is slowing down the bankruptcy case. It is also having “a chilling effect on potential witnesses and creditors in these cases,” she wrote, by causing Guo’s creditors, many of them Chinese immigrants, to worry they too will be harassed if they come forward. “The irreparable harm continues to occur, which is extremely alarming,” Manning wrote.

A lawyer for Guo did not respond to a request for comment.

Manning is the latest judge to struggle to deal with Guo, who is involved in a large amount of litigation. He has repeatedly defied court orders and has so far enjoyed seeming impunity. Last year, he lost a lengthy civil case in New York brought by a creditor seeking repayment of a $30 million loan made in 2008. That creditor, a Cayman Islands-based hedge fund called Pacific Alliance Asia Opportunity Fund, sought to recover its money by seizing assets Guo seemed to clearly have control of—a spacious Upper East Side condo and a $28 million yacht named the Lady May, after Guo’s daughter. But Guo claimed he actually owned neither asset. He said his children did. And he repeatedly violated a New York judge’s order that he keep the yacht in the court’s jurisdiction while the case was adjudicated. Bannon was famously arrested on that yacht in 2020.

The New York judge, Barry Ostrager, last year found Guo in contempt of court and fined him $134 million. Guo “secreted his assets in a maze of corporate entities and with family members,” Ostrager said in that ruling. “This scheme has enabled [Guo] to assert that he has no assets despite his lavish lifestyle, which plaintiff has catalogued with material from social media clippings, photographs and videotapes showing [Guo] living large and boasting of his wealth, expensive homes, private plane, and yacht.”

That ruling seemed like bad news for Guo. But he side-stepped it by filing bankruptcy rather than paying. He has since continued his efforts to shield the wealth he advertises from creditors. The ongoing protests of creditors’ attorneys appear to be part of an ongoing effort to frustrate US courts.