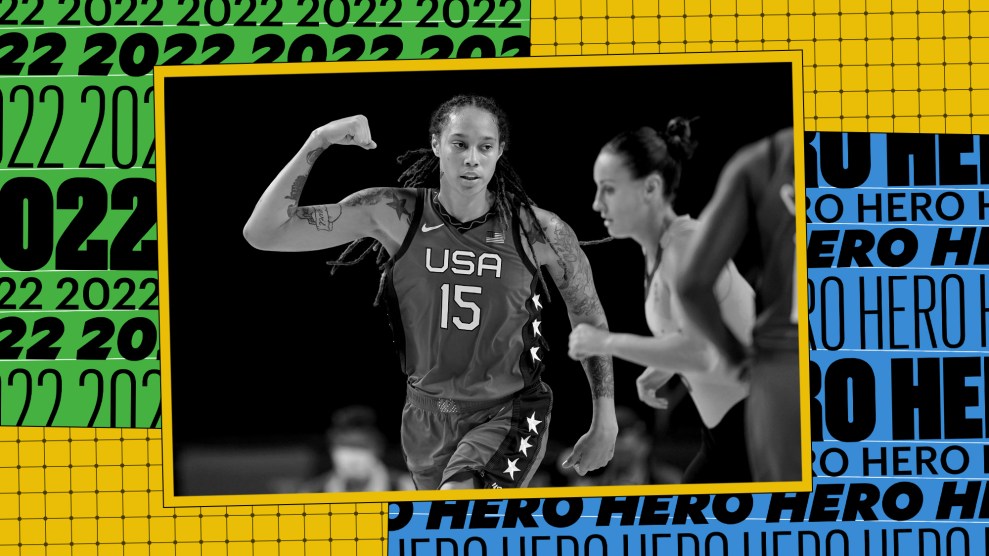 On December 8, grainy footage showed WNBA star Brittney Griner landing in San Antonio after being released from 294 days in Russian detention. Griner wore a beanie over her hair that had been chopped off to avoid freezing conditions at the remote Russian penal colony in which she was, until recently, expected to ride out a nine-year sentence.

The Phoenix Mercury center and two-time gold Olympian, Griner was detained on February 17 at a Moscow airport just one week before Russia invaded Ukraine. The player, known as “BG” among friends and fans, was arrested for having cannabis vape cartridges in her luggage that she had been prescribed for pain management. Griner was en route to play her 10th season for the Russian women’s basketball premier league, UMMC Ekaterinburg. She is one of 73 players—fully half of the WNBA league—who played abroad in the 2022 off-season, some for four to five times their WNBA salary.

The geopolitical debate throughout the past 10 months over the best way to advocate for Griner’s release has been controversial. Some argued that Griner’s life depended on vociferously fighting her arrest, others campaigned for collective silence, saying that raising her profile would only encourage Russia to view her as a political pawn. But a recurrent theme in nearly every tweet, news story, or bar conversation was about pay equity. The topic that began as background in Griner’s story soon became a central theme—and stayed there.

In April, nearly three months after Griner’s arrest, and a week after a US consular official visited her in custody for the first time, Seattle Storm’s Breanna Stewart broke the league’s silence. “The big thing is the fact that we have to go over there. It was BG, but it could have been anybody, ” Stewart told The Root. “WNBA players need to be valued in their country and they won’t have to play overseas.”

Those who weren’t aware that the WNBA season started in May, or even knew about the WNBA season at all, were now versed in the grim realities of these elite athletes’ lives. Griner was in the midst of a war zone because her league salary was $221,450, or 190 times less than some of her NBA counterparts—like Los Angeles Lakers Lebron James who earned $41 million during the 2021-2022 season (not including an additional $75 million from sponsors, memorabilia, royalties, and media.)

When asked for comment, WNBA Commissioner Cathy Engelbert disputed that players went overseas for strictly financial reasons. “They want to play as much as they can while their bodies can still do that, so we’ll support it,” Engelbert said in an interview with People. “but we’re working on models that will keep more of our players in the US for longer periods of time in the offseason.”

Just a week before Griner returned, one of the league’s top players, Las Vegas Ace’s Kelsey Blum, went on the Residency Podcast to discuss wage disparities and clarify assumptions that players in the WNBA are looking for stratospheric NBA salaries—that average $7 million. “We are not asking to get paid what the men get paid,” Blum told the hosts Jeff Tomastik, Low Raven, and Drew Belcher. “We’re asking to get paid the same percentage of revenue shared,” which, as the 2020 collective bargaining agreement (CBA) details, is 50% of revenue from sponsorships, broadcast agreements, and partnerships. According to the women’s CBA, the WNBA will only meet 50% of shared revenue if they reach undisclosed projected revenue growth targets. But there is no way to hit those targets without increased investment. To Griner’s teammate, Skylar Diggins-Smith, it’s a classic chicken-and-egg scenario.

“People always talk about, ‘Well, you gotta have more people in the seats.’ But nobody puts us on TV!” Diggins told Wealthsimple Magazine in 2018. “Yes, LeBron is one of the best athletes in the world, but [ESPN] will go into everything that he ate before they show a highlight of a WNBA game.”

The US women’s soccer team had been ringing the same alarm for six years, and finally won equal pay agreements this past May. One agreement guaranteed an equal split of World Cup prize money between the US men’s and women’s teams–the first federation to do so. That meant that earlier this month when the US men’s team lost in the World Cup knockout round, the women took home $6 million in prize money. As my colleague Jackie Mogensen noted, that’s $1 million more than the total prize money they won by finishing first during the women’s World Cup in 2019 and $5 million more than when they did the same in 2015.

Another point about unequal treatment that was made during Griner’s detention was that, barring salary, if she were a male athlete, she never would have been left to suffer as long as she had been.

On July 4, in a letter that Griner’s representatives passed to the White House, Griner wrote about her new understanding of freedom; one that wasn’t predicated on her jersey or accomplishments. She asked President Biden to remember her “and the other American detainees” while she sat in prison “alone with [her] thoughts,” terrified that she “might be [in Russia] forever.” A week later Lebron James responded to her in an episode of his talk show The Shop. When artist and guest Rashid Johnson described Griner as the “Lebron James of the WNBA,” James said he found it difficult to put himself in her shoes.

“How can she feel like America has her back?” James asked. “I would be feeling like ‘Do I even want to go back to America if I’ve been gone over 130 days and I feel like there’s been zero effort?’” (James said he “wasn’t knocking our beautiful country” in a tweet a few hours later.)

And then finally, she was home, the result of a prisoner swap with Russia. (On The Shop James applauded her return.) But the fight for WNBA players continues. In an NPR segment the day after Griner landed, Alicia Jessop, the founder of the sports industry site Ruling Sports, noted that even though Griner may be back in the States, the question of pay hasn’t been resolved. If anything, she said, “a lot of people are really digging their heels in on these women being paid enough.” While not working in Russia, 67 players are still overseas earning most of their annual income at up to fivefold their US salary. The disparity in compensation remains so large that some call the regular WNBA season the player’s “off-season.”

But maybe there will be some progress this year after Griner’s ordeal. At 26 years old, the league is the Gen-Z of basketball—and like the generation it reflects, organizing is in its DNA.