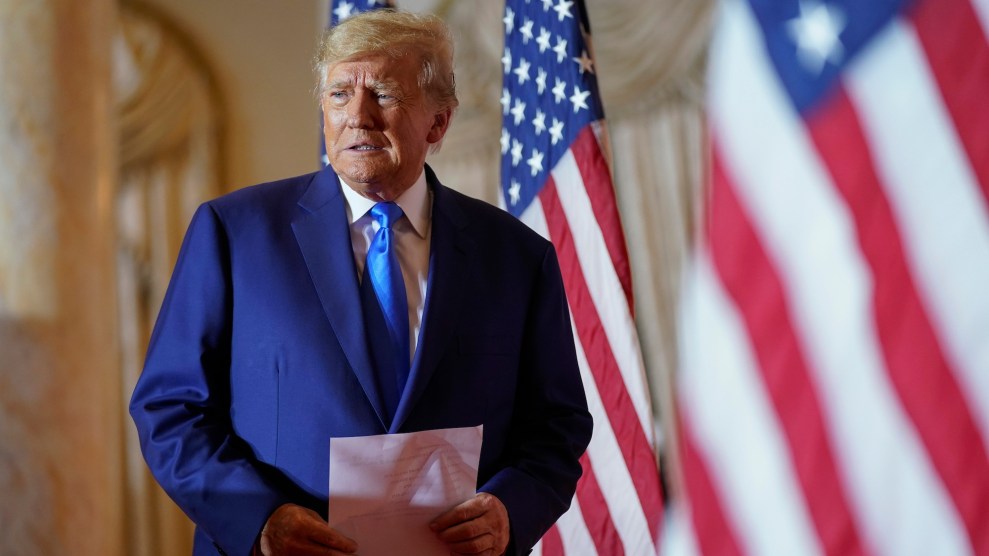 Donald Trump’s presidential campaign is mulling a return to Twitter and Facebook for the former tweeter-in-chief. Such a move might help his stalled political operation, but it could also seriously undermine his most prominent current business endeavor, the social media platform Truth Social. Shares in Digital World Acquisition Corp.—a company that’s supposed to one day merge with Truth Social’s parent company and take it public—dropped precipitously on the news that Trump was eyeing a return to other platforms.

On Tuesday, Trump’s campaign sent a formal letter to Meta, the parent company of Facebook, asking for Trump’s Facebook account to be restored. Trump’s Twitter account was also recently restored following Elon Musk’s takeover of that company, but Trump has not yet posted there. On Tuesday, NBC reported that Trump aides have begun workshopping potential tweets for a return. Both platforms banned Trump after the January 6 attack on the US Capitol, but the Facebook ban was eligible to be lifted after two years—a period that elapsed on January 7 of this year. Both platforms were powerful tools for his earlier campaigns; he had more than 35 million followers on Facebook and 88.7 million on Twitter. On Truth Social, which was set up in late 2021, he has just 4.2 million followers. His posts there have limited visibility beyond his most hard-core supporters.

While Truth Social has appeared to struggle—reports this past summer alleged it was failing to pay vendors on time, and several top executives and board members have left—it remains one of the few potentially bright spots in Trump’s business empire. His development projects and condo sales have dried up, and hotel revenue dropped off a cliff during the pandemic. Truth Social, meanwhile, could pay off big for Trump if it ever completes its merger with DWAC. DWAC is what is known as a special purpose acquisition corporation—a company formed with no specific business plan and which goes public as essentially a blank slate. Once public, a SPAC then seeks to merge with a business that does have a real purpose—in this case Truth Social’s parent company, Trump Media and Technology Group.

It’s a process that allows companies like TMTG, which would’ve struggled to make it through the traditional IPO process, to go public. Shares in DWAC, which signed an agreement to merge with TMTG in 2021, surged as high as $97 after the deal was announced. The price has dropped over the past year as the company has disclosed various investigations by the Securities and Exchange Commission and other financial regulators. At the heart of those probes is an allegation that the company broke the primary rule of SPACs and had already struck some kind of agreement with Trump’s company before going public. DWAC denies this. The two entities can’t merge until the SEC completes its investigation—a delay that is preventing Trump’s company from accessing huge amounts of investor money.

While following a general downward trend lately, DWAC’s share prices have bounced around based mostly on what Trump has been doing and how active he has been on Truth Social. While Trump-aligned politicians have flocked to the site, the platform has largely failed to attract many outside the MAGA-faithful. The share price jumped up around the time Trump announced his 2024 presidential campaign but then slid back down as the campaign seemed to go dormant. Shares in DWAC had slumped to less than $15 late last year—close to its all-time low—before briefly jumping earlier this week when Trump posted a message on Truth Social claiming the platform was seeing a lot of activity. But on Wednesday, after news broke that Trump’s campaign is actively pursuing a return to Twitter and Facebook, DWAC’s share prices began diving again, losing more than 7 percent of its value.

As has been the case for most of his time since founding Truth Social, Trump didn’t seem particularly concerned about soothing investors or pushing back on worries that he might neglect his pet media project. His Truth Social posts on Wednesday were extended diatribes about the investigation into the discovery of classified documents at Mar-a-Lago and a flurry of links to stories about Hunter Biden. (In one post, Trump claimed he took folders marked as “classified” as souvenirs and suggested someone might have planted real classified information among them.)

Investors should probably worry about Trump departing Truth Social—or at least relegating it to the back burner. While he has stated he will stick with the platform, it has long been made clear that he has essentially no legal obligation to do so. As I wrote last fall, Trump is supposed to post content on Truth Social six hours before it appears elsewhere, but there’s an exception for anything considered “political messaging”:

DWAC disclosed in Monday’s filing TruthSocial does have exclusive rights to some of Trump’s social media postings—but it won’t have a monopoly on the type of political red meat that made Trump such a draw on Twitter in the first place. In general, Trump will be obligated to post content on TruthSocial six hours before it can be published anywhere else. But there’s a massive loophole: These rules don’t apply to any content that is related to political messaging, political fundraising, or get-out-the-vote efforts. Those can be posted anywhere Trump wants, whenever he wants.

As I noted, only a few of Trump’s most popular tweets were strictly personal and non-political.

At the time, DWAC seemed to acknowledge that such a scenario could pose a substantial risk to its business. “TMTG’s future success will depend, to a significant extent, upon the continued presence and popularity of President Trump,” the company warned investors. “If President Trump were to discontinue his relationship with TMTG due to death, disability, or any other reason, or limit his involvement with TMTG due to becoming a candidate for political office, TMTG would be significantly disadvantaged.”