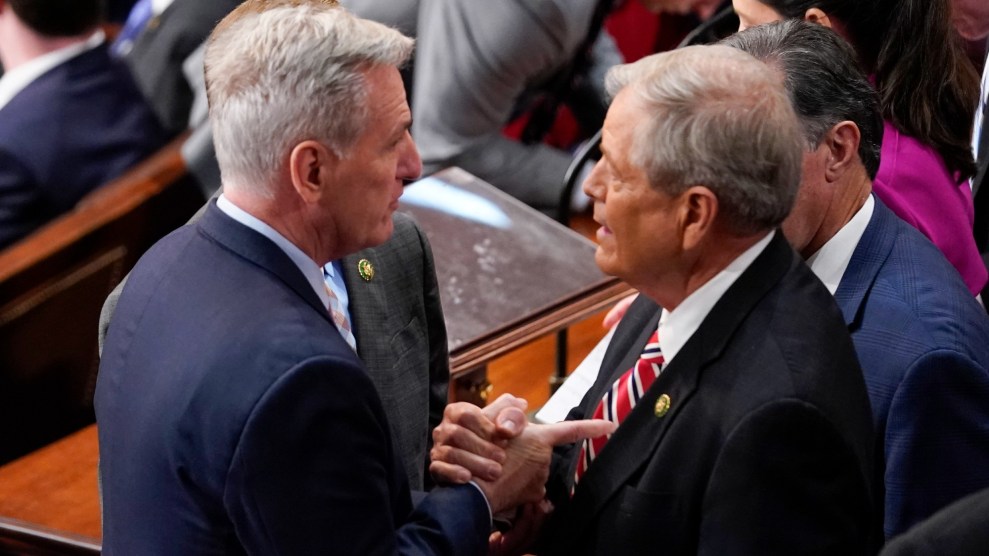 House Republicans are celebrating the anniversary of the January 6 attack by making it clear that they are not, in actual practice, against it.

Would-be House Speaker Kevin McCarthy spent Friday morning and preceding days hurling concessions at some of the same far-right members of Congress who helped Donald Trump incite the riot and tried to overturn a democratic election. After a dozen ballots, McCarthy’s genuflecting finally won him support from House Freedom Caucus chair Scott Perry (R-Pa.). Perry, as my colleague David Corn points out, is known for his central role in a scheme to have the Justice Department falsely claim to have found evidence supporting Trump’s election fraud lies. That effort is the subject of an especially robust part of the sprawling DOJ criminal investigation that includes FBI agents searching Perry’s phone. The scandal does not seem to have affected Perry’s position as a power broker in the House GOP. Exactly what concessions McCarthy offered to win over Perry and his allies remains to be detailed. But an agreement by the Congressional Leadership Fund, a super PAC linked to McCarthy, to refrain from opposing hard-right candidates in open GOP primaries may have smoothed the path to Perry’s reversal.

McCarthy on Friday also won over Rep. Paul Gosar (R-Ariz.), who—along with Rep. Andy Biggs (R-Ariz.), former Rep. Mo Brooks (R-Ala.) and Stop the Steal maestro Ali Alexander—“schemed up,” in Alexander’s words, a plan to put “maximum pressure on Congress while they were voting” on certifications of the presidential election on January 6. McCarthy had already agreed to restore to Gosar committee seats he lost in 2021 after participating in a white nationalist conference and posting an animated video that showed him killing Democratic Rep. Alexandra Ocasio-Cortez. McCarthy likewise had vowed to restore the committee postings of QAnon-friendly Rep. Majorie Taylor Greene. Greene had previously been booted from her committees over outlandish rhetoric, like saying Jewish space lasers cause wildfires. Unlike Perry and Gosar, Greene has been a vocal McCarthy backer since the midterm elections.

McCarthy’s litany of concessions to his party’s far-right includes a vow to gut the House Ethics Committee. Last month, the House January 6 committee asked the Ethics Committee to investigate Jordan, Perry, Biggs, and McCarthy himself for refusing to comply with subpoenas from the panel.

Regardless of their stance on McCarthy, the GOP members who sought to overturn the 2020 election remain largely unrepentant. Few have acknowledged that Trump attempted a coup, or that supporting his effort was a mistake. They face little pressure to do so. The coercion runs the other way.

McCarthy himself joined in voting to throw out the Electoral College results, even after the insurrection. He said, days after the attack, that Trump “bears responsibility for [the] attack on Congress by mob rioters.” But he quickly retreated from that clarity to appease his party’s right flank. He similarly backed the idea of a bipartisan commission to investigate January 6, but he then reversed course and worked to undermine the committee that then-Speaker Nancy Pelosi eventually established. He helped oust former Rep. Liz Cheney from GOP leadership—and eventually from the House itself—as retribution for her insistence on holding Trump accountable for January 6.

The Republican meltdown this week follows years of GOP dysfunction caused by relying on the votes of radical members opposed to governing. But the party’s failure to coherently oppose January 6 and Trump’s coup attempt is no a mere continuation of a trend. It is a new nadir.

The fact that this failure has continued into 2023 is especially notable because it is clearly against Republicans’ collective self-interest. GOP devotion to the Big Lie is one reason the Republican majority is so narrow. And the narrowness of that majority is, in turn, the reason why the party’s most vocal Big Lie proponents have been able to hold their party leadership hostage this week. The insurrectionist wing is exploiting a problem it helped cause. McCarthy probably knows this better than anyone, but he is appeasing them anyway.

McCarthy clearly calculated that his personal ambition required him to cleave to Trump, despite the ex-president’s recent call for the “termination” of constitutional provisions preventing him from being illegally re-installed as president. This is the prevailing position of members of the House GOP caucus. The majority surely know that the party has been hurt politically by its loyalty to Trump and the Big Lie lost-causers. But many of their districts and short-term interests give them cause to avoid getting out ahead of any effort to quit the crazies. They can score points by opposing it. Republicans have a world-historic collective action problem.

On Friday morning, as House members gathered to mark the two-year anniversary of January 6, only one GOP member, Rep. Brian Fitzpatrick (Pa.), was there. The rest were on a conference call regarding the speaker fight. Read into that what you will. But the symbolism matters less than actual repudiation. Supporting American democracy means choosing to back its rules when you lose. Republicans, two years after January 6, remain beholden to the Big Lie and its tellers. Priorities are revealed in actions. By such standards, House Republicans are still siding with the people who stormed the Capitol and with the former president who incited them. The call is coming from inside the House.