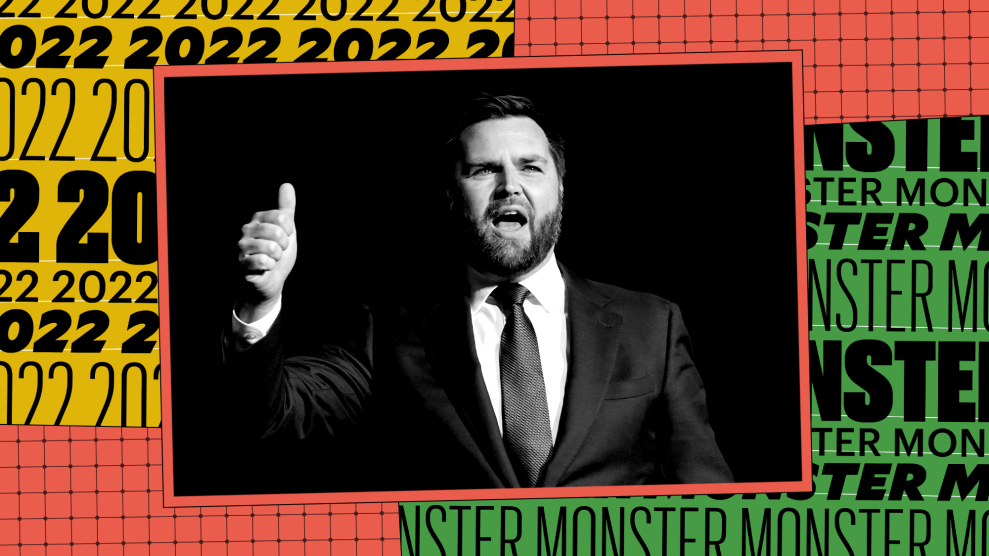 In October 2016, less than a month before Donald Trump would be elected President of the United States, J.D. Vance sat down for a conversation at the American Enterprise Institute.

This was Vance in his most Atlantic-friendly era, when he was chiefly the author of Hillbilly Elegy: A Memoir of a Family and Culture in Crisis. This was before Vance was the next Senator from Ohio. Before he grew the beard that a friend said was an attempt at a “severe masculinism thing.” Before the mea culpas. When he was just a baby-faced venture capitalist turned author living in San Francisco, set to talk at AEI about “the decline of the white working class.”

Yet, the talk’s host that day would be indicative of his eventual direction. Vance was interviewed by Charles Murray, an emeritus scholar at AEI. In his 1994 book, The Bell Curve, Murray attempted to write a sophisticated case for social darwinism. He believed that social class in the United States was strongly correlated with innate intelligence and that this “cognitive ability” could be measured through IQ scores. He became infamous for sections in the book contrasting the IQ scores of white and Black people. He claimed such differences were the product of something genetically intrinsic to those groups and, therefore, the main explanation of persistent racial inequality. That Vance found Murray to be a worthy interlocutor to discuss the plight of his eastern Kentucky family or the people he grew up with in Middletown, Ohio should’ve been an early warning that he ignored much when he talked about race, class, and inequality in America. (Just eight minutes into the talk with Vance, the 19th-century race scientist in Murray jumps out as he talks about the “clean Scots-Irish blood” of his ancestors.)

The combination of the two, Murray and Vance, now makes the subtitle of Vance’s soon-to-be Netflixed memoir jump off the page: “culture in crisis.” In that understanding of poverty, you can see the foundations of the New Right.

Vance, a Republican who said he did not vote for Trump in 2016, began a stratospheric rise as liberals’ premier “Trump country” translator. Hillbilly Elegy was a massively popular best-seller adapted into an Oscar-nominated film. In a review, the New York Times called the book “a compassionate, discerning sociological analysis of the white underclass.” But this was sociology of Gladwellian rigor. Vance offered narratively compelling, easily digestible explanations to complex problems decades in the making. He claimed a distinct cultural pathology had taken hold in the white working class that “increasingly encourages social decay instead of counteracting it.” The people he grew up with had tough economic prospects, but their lives ultimately came undone “because of some of the decisions they made,” Vance told Murray.

The next part of the story is well-trodden. As Trump’s term progressed Vance woke up. The American elite he became part of at Yale Law School and as a venture capitalist in Silicon Valley hated Trump, Vance believed, simply because the former president stood up for the interests of the downtrodden silent majority of middle America. Vance fashioned himself as a “New Right” class warrior returning to his salt-of-the-earth roots in Ohio to run for Senate, talking up the need for a renewal of industrial policy and a return to retrograde gender roles as a part of his campaign. The credulous liberals that made up a large part of Vance’s initial audience were recast as his primary enemy: a sneering, self-righteous coterie that represented everything wrong with America. This year, the same man CBS News called on to offer wisdom about the white supremacist rally in Charlottesville, Virginia in 2017 became one of the foremost purveyors of white grievance politics, going as far as to claim that Joe Biden was trying to kill Trump voters by letting fentanyl come over the US-Mexico border.

The soon-to-be seated Senator has said that Murray’s book on the white working class, Coming Apart, was a major influence on him. It shows. The policy goal that has defined Murray’s career is the elimination of the already-paltry American welfare state. This is why Vance’s vibes-based story of Appalachian poverty was so welcome. Why so many liberals were ready to accept Vance’s narrative of cultural pathology among rural white people in 2016 is because they’d been primed by decades of Democrats and Republicans alike making almost identical arguments about the so-called Black “underclass.” (Bill Clinton said Murray’s “analysis was essentially right” and credited him with informing welfare reform.) The Times review likened Vance calling out the backwardness of white, rural America to President Obama saying “brothers should pull up their pants.”

As Karen and Barbara Fields point out in their book Racecraft: The Soul of Inequality in American Life, Murray’s project did not simply represent an attempt to mainstream scientific racism, but was a broad treatise against the concept of social equality. Throughout his career, Murray has arguably been just as preoccupied with poor white people as he has with poor Black people. The Fields point to a sickening 1993 essay Murray originally wrote for the Wall Street Journal entitled “The Coming White Underclass,” where he issued apocalyptic warnings that the lack of two-parent white households would destroy the country’s social fabric. To discourage single motherhood, Murray suggested the state halt support altogether. A pregnant woman “must get support from somewhere, anywhere, other than the government,” he wrote. If women resisted, Murray recommended mass adoption and to defund social services and spend that money “lavishly” on new orphanages. These policies would work for both Black children and “flawless blue-eyed blond infants,” he wrote.

Some on the right may see Vance as an eventual successor to build Trump’s brand of national conservatism into a coherent political movement. But his Senate campaign wasn’t the rousing success indicative of a future national contender. He was embarrassed onstage at a debate by Tim Ryan, and probably only won the election because he was dragged across the finish line by Ohio’s popular incumbent governor, Mike DeWine.

Instead, I think Vance will be Charles Murray in Senatorial form. There might be attempts to shore up his newfound populism with a half-hearted policy here and there, but what’s more likely is that he’ll continue to hone his real talent: rationalizing poverty through subterfuge and racial grievance.

For at least the next six years, liberals will see what it’s like to live with the monster they created.

As usual, the staff of Mother Jones is rounding up the heroes and monsters of the past year. Find all of 2022’s here.