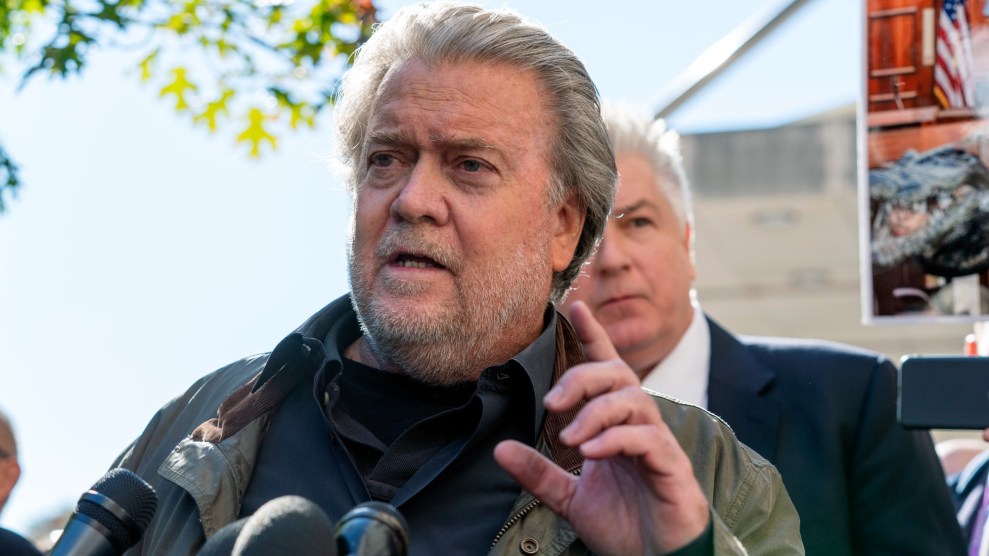 Steve Bannon and others involved in the January 6, 2021, attack on Congress lauded supporters of former Brazilian President Jair Bolsonaro as they stormed government buildings in their capital on Sunday. The cheerleading showed that far-right supporters of Donald Trump’s Big Lie are not merely unrepentant but eager to continue exporting their opposition to democratic norms.

“Brazilian Freedom Fighters,” Bannon wrote Sunday on the right-wing social media app Gettr. His comment follows months of vocal support on his War Room podcast for Bolsonaro supporters who have camped out in Brazil to protest his defeat in October’s elections. Bannon has said that he is directly advising the former president’s son, Brazilian Congressman Eduardo Bolsonaro. The younger Bolsonaro has touted Bannon’s calls for his father, who is reportedly now in Florida, not to accept defeat.

Bannon’s role appears to reprise his support for Donald Trump’s election fraud lies and effort to retain power after his 2020 defeat. As Mother Jones reported, Bannon encouraged Trump’s premeditated plan to falsely declare victory on Election Day and championed his efforts to assemble supporters in Washington on January 6. On his January 5 War Room podcast Bannon encouraged listeners eager for “revolution” to go to Washington. “All hell is going to break loose tomorrow,” he said.

Bannon was sentenced in October to four months in prison for contempt of Congress due to his refusal to comply with a subpoena from the House’s January 6 committee. He remains free while he appeals that conviction.

Bannon was far from alone in supporting Brazil’s insurrectionists. Another MAGA figure involved in the January 6 attack also embraced their efforts on Sunday. Ali Alexander, the “Stop the Steal” organizer who claimed to have “schemed up,” along with three members of Congress, the plan to assemble Trump backers in Washington to pressure lawmakers not to certify Joe Biden’s victory on January 6, declared on social media, “I do NOT denounce unannounced impromptu Capitol tours by the people.” He also urged the Brazilian rioters to “do whatever is necessary!”

Asked about these comments, Alexander said, in part: “What I support is the Brazilian people—namely the Christians there but everyone who wants their vote counted. I hope everyone is safe, rowdy, and peaceful!”

These cheers for opposition to the peaceful transfer of power in Brazil, which has already occurred, came two days after the anniversary of January 6, during which Rep. Kevin McCarthy (R-Calif.) in his efforts to secure his new position as House Speaker, offered a litany of concessions to far-right lawmakers, including key supporters of Trump’s self-coup attempt.

Rep. Jamie Raskin, (D-Md.), a member of the just-shuttered January 6 committee, on Sunday called for the Brazilian insurrectionists, like those who attacked the US Capitol, to face justice.

Democracies of the world must act fast to make clear there will be no support for right-wing insurrectionists storming the Brazilian Congress. These fascists modeling themselves after Trump’s Jan. 6 rioters must end up in the same place: prison.

This article has been updated with a statement from Ali Alexander.