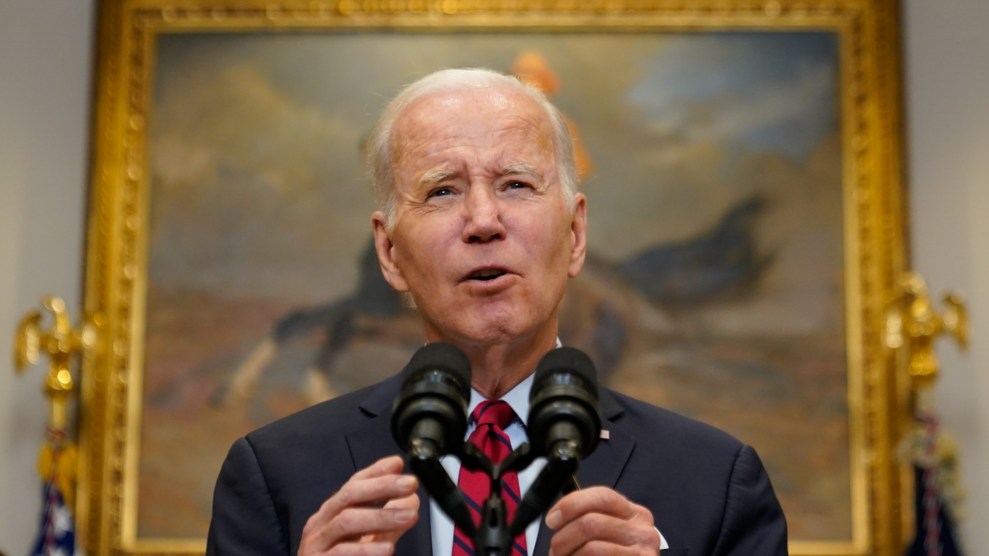 On Thursday, President Joe Biden announced new and stricter border enforcement measures that include the expansion of a Trump-era policy to summarily expel migrants and further restrict asylum seekers’ ability to seek protection at the border. In order to “increase security at the border and reduce the number of individuals crossing unlawfully between ports of entry,” the administration will use the public health order known as Title 42 to turn away not only Venezuelan migrants, but also nationals from Haiti, Cuba, and Nicaragua. At the same time, a parole process will enable a limited number of people from these four countries to apply from abroad to enter the United States. As long as they have a sponsor to vouch for them and pass background checks, they would be allowed to stay and work in the country for a period of two years.

“If you’re trying to leave Cuba, Nicaragua, or Haiti, or have agreed to begin a journey to America, do not just show up at the border,” President Biden said. “Stay where you are and apply legally from there.”

Under the proposed plan, 30,000 migrants from Venezuela, Haiti, Cuba, and Nicaragua would be eligible for parole each month. An agreement with the Mexican government will also facilitate a capped monthly return of 30,000 nationals of these countries to Mexico. (Previously, Mexico only consented to the return of its citizens and migrants from Venezuela, Guatemala, Honduras, and El Salvador.) The Department of Homeland Security would also direct more resources towards border enforcement, efforts to counter smuggling, and increasing the use of fast-track deportations, while also boosting refugee resettlement from Latin America and the Caribbean.

While Biden promised to make the process “orderly, fair, safe, and humane,” immigrant rights groups were disappointed. For Aaron Reichlin-Melnick, policy director with the American Immigration Council, the “carrot and stick” border approach comes “with a stick much bigger than the carrot.” During his remarks, the president praised the parole process as it has been applied to Venezuelan migrants, saying it has resulted in a dramatic decrease in unlawful crossings—from an average of about 1,100 to less than 250 a day. But immigration scholars and advocates have pointed out that the 30,000 cutoff is insufficient, and the number of expulsions will far exceed the admissions of migrants under the parole process.

30,000 monthly parole slots for refugees from Cuba, Nicaragua, Haiti, and Venezuela would be significant.

But given that more than twice that many migrants from those countries are arriving at the border, it would mean far more expulsions than paroles.https://t.co/TflkcVdhHa pic.twitter.com/NnYs8D7fxw

Experts noted that expanding opportunities for parole, while a step in the right direction, in no way should replace asylum. “That fundamentally misunderstands the realities and purposes of asylum, and poisons this otherwise-laudable expansion of parole,” Jeremy Konyndyk, president of Refugees International, explained on Twitter. “It makes the program the least accessible to the very people who most need asylum—those at urgent risk.” He continued: “The President’s comments present an at-risk person in one of these countries with an impossible choice: stay in an unsafe situation and hope you can avoid harm until parole comes through? Or flee from that harm, at the expense of being Title-42-ed at the US border?”

Biden himself acknowledged in his remarks on Thursday that Title 42—whose court-ordered termination is being held back pending a Supreme Court review—is flawed. “It was designed to deal with the pandemic, but it’s used as a means to expel people at the border,” he said. “They’ve been turned away. They go back. They try again. They try again. Well, you know, they can and they do try to re-enter the United States again and again, which makes the problem…at the border even worse.” Then he added: “I don’t like Title 42. But it’s the law now, and I have to operate within it.”

“The essence of asylum is to have a system in place for those needing to flee toward safety and freedom.” Margaret Cargioli, directing attorney for policy and advocacy at Immigrant Defenders Law Center, said in a statement. “We cannot ask people to stay in place when their rights are being denied and their lives are at risk. We cannot tell a woman who is being beaten and has no government protection not to flee for safety. We cannot tell LGBTQ+ people to stay in place while they are discriminated against and potentially killed. A humane asylum system should never require a person whose life is in danger to wait patiently and risk being killed while we sort out how to process people at the border.”

Some advocates also suggested the parole process privileges certain migrants over others and accused the Biden administration of “cherry picking” who can access protection. “The new measures discriminate based on nationality allowing some nationalities to be paroled in (Venezuela, Nicaragua, Haiti, Cuba) while excluding others fleeing contexts of severe violence and rights violations including El Salvador, Guatemala, and Honduras,” Chiara Galli, an assistant professor at the University of Chicago and author of the upcoming book Precarious Protections: Unaccompanied Minors Seeking Asylum in the United States, said on Twitter. “Relatively ‘privileged’ parolees are admitted to the US in a state of legal limbo, with no guarantee that they will ever obtain refugee status and lasting protection, and these entries are limited to an arbitrary (and quite low) number of 30,000 parolees per month. Parole should not be used as a substitute for asylum and even less so when this is used as an excuse to limit applications and grant fewer rights.”

The government has also indicated it might rely on a transit ban similar to a policy conceived by anti-immigrant hardliner Stephen Miller that would make anyone who fails to ask for protection in other countries on their way to the United States ineligible for asylum. “Despite the Biden admin’s efforts to pretty up their planned proposed rulemaking banning asylum seekers, the reality is that an asylum entry and transit ban is right out of the Trump playbook,” Eleanor Acer of Human Rights First said. “You can put lipstick on the pig, and it is still a pig.”

This a sobering development for Democrats. The Biden Administration is using a policy that Stephen Miller couldn’t get through the courts to categorically ban asylum. They are doing so in addition to expanding Title 42 and going beyond what any court has ordered them to do. https://t.co/OwUCbaMpNZ

On Sunday, President Biden will make his first visit to a border since taking office and go to El Paso, Texas, where he will meet with local officials and community leaders. In his remarks this week, Biden criticized Republicans in Congress for blocking meaningful immigration legislation. “While these steps will help address some of the most acute challenges at the Southwest border,” Biden said, “they will not solve all of the problems in an immigration system that has been broken for far too long.”