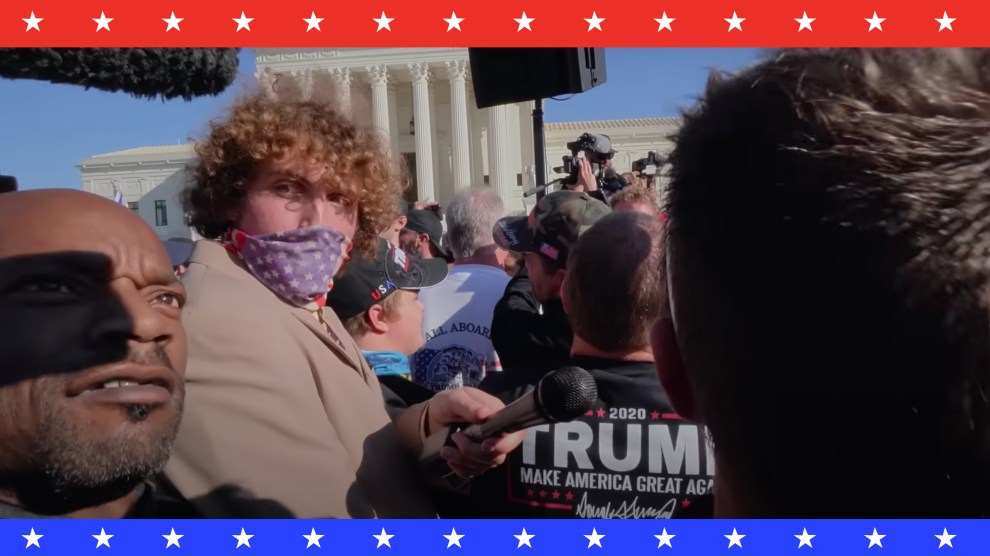 The 25-year-old documentarian Andrew Callaghan has been pissing off reporters lately.

In his new HBO documentary, This Place Rules, Callaghan chronicles the events leading up to January 6, 2021, via dozens of man-on-the-street interviews with outlandish people of all stripes—from MAGA protesters to QAnon believers to self-proclaimed antifa members. In most scenes, Callaghan wears an ill-fitting suit and a bemused expression as he holds a microphone in the face of anyone willing to speak to him. There is something about him that causes people to burst into rants (and, too often, ad-libbed raps). But Callaghan’s interactions with conventional reporters have gone less smoothly than his chats with the masses.

In a recent interview with CNN’s Don Lemon, Callaghan said, “The movie’s not just about the Capitol riot and all that. It’s also about, like, media echo chambers, you know what I mean? And like the dangers of the 24-hour news cycle, and how, I think, mainstream media like Fox—and even CNN—competes for views by running constant, 24-hour news cycles based upon fear, division, outrage, and panic, probably to like, sell ads.”

Lemon, looking taken-aback, replied, “First of all, I don’t agree with what you’re saying, but I’m not exactly sure of how that played into people going into the Capitol and rioting on January 6. There’s nothing fake about CNN.” Lemon made a good point: The connection that Callaghan suggests between the 24-hour news cycle and the events of January 6 is tenuous. (His discussion of “echo chambers” also falls into a cliché that, as my colleague Ali Breland has written, ignores how social media actually works.)

Still, Lemon’s indignant response made it clear that Callaghan had struck a nerve. In an October 2022 poll from the New York Times, 59 percent of registered voters said the “mainstream media” was a major threat to democracy. An additional 25 percent said it was minor threat. That’s more than said the same about Donald Trump.

Callaghan fared no better in an extended interview with WBUR’s Robin Young in front of a live audience in Boston. Young questioned Callaghan’s decision to interview conspiracy theorist Alex Jones and to include footage of himself pouring whiskey into Jones’ mouth while Jones lifted weights. “What did you want to get from Alex Jones?” Young said, as the audience laughed. “I’m serious. I mean, this is one of the most despicable Americans in our history. How do you think the Sandy Hook parents would feel about drinking with him?” Callaghan replied that Mark Bankston, the attorney who represented Sandy Hook families against Jones in court (and dramatically revealed Jones’ lawyers’ incompetence), enjoyed the scene. But Callaghan’s response didn’t matter—it was clear from Young’s chastising tone that she had made up her mind on the ethics of interviewing Alex Jones before she asked the question.

Callaghan’s friction with members of what he would call the mainstream media underscored a point he made, however inelegantly, in the film: Major news outlets are out of touch with many Americans, who are increasingly turning to fringe and conspiracy “news” sites.

Still, the documentary is not about Tucker Carlson or Rachel Maddow or even Donald Trump. While Callaghan criticizes the news media, This Place Rules focuses mainly on the internet figures who push people into conspiratorial rabbit holes, like Alex Jones, Enrique Tarrio, and the person (or people) behind Q. None of these people, Callaghan notes, was arrested in relation to the January 6 riot, despite their role in inciting it.

This Place Rules will not teach an informed viewer a lot of new context about the lead-up to January 6, but it mainly succeeds at creating the sense that we’re all influenced by forces beyond our control—and that the line between being grounded in reality and believing in outlandish conspiracy theories is thinner than we might care to believe. Callaghan questions if we can close ourselves off from someone like Alex Jones. And if we can’t, how do we deal with someone who is both cruel and ridiculous? Callaghan proposes a distanced mind but close proximity. He suggests that the stuffiness of traditional news—its hope to be “above” the loud but small groups on the edges—does not work.

One moment, in particular, has stuck with me. Callaghan documents an Atlanta-based family with three homeschooled children whose parents have seemingly brainwashed them into believing that there is a hidden pedophilic message in the Chipotle logo. Two miles away, Callaghan interviews three young, Black brothers who live in a housing project and are mourning the loss of their cousin, who was killed during an armed robbery. Callaghan says that the dichotomy of the two families “made me wonder if it would ever be possible to bridge that gap in understanding.”

For whatever flaws it might have, This Place Rules talks to people directly, with eye contact and without pretense. That’s a start.