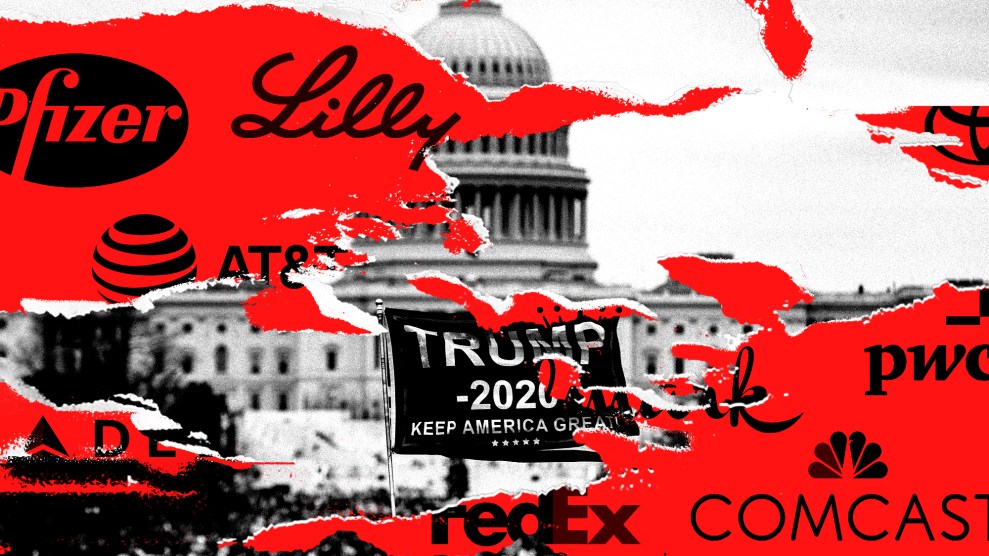 Two years after President Donald Trump incited a mob to storm the US Capitol and halt the certification of the Electoral College results, the January 6 insurrection is still a live wire in American politics. Oath Keepers founder Stewart Rhodes was convicted of seditious conspiracy last month for his role in the riot. Advocates of Trump’s election lies received such an intense electoral rebuke in the midterm election that Democrats actually expanded their majority in the Senate. The special congressional select committee that was formed to investigate Trump’s role in the attack released its final report in December—and recommended criminal charges for the former president. On the day the committee held its final hearing, Caroline Edwards, a Capitol Police officer who was injured in the attack, wrote in the New York Times, “[e]ven now, it hurts to talk about it.”

But many of America’s largest companies have long since moved on. In the first national election since a sitting president tried to overturn the popular will, some of the country’s biggest brands showered election deniers with millions of dollars in donations via their political action committees.

In the days after the insurrection, dozens of companies told Popular Information and other outlets that they were pausing or reconsidering their political donations. Hallmark, which had donated to Sen. Josh Hawley (R-Mo.) in the past, singled him out by name in its statement condemning the attack. Big-pocketed corporations such as Pfizer, Eli Lilly, Comcast, PricewaterhouseCoopers, and AT&T promised to suspend all contributions to members of Congress who voted against certifying the results either temporarily or for the entire 2022 cycle. But not only did each of those six companies eventually turn the spigot back on, they all ended up writing checks to help re-elect Rep. Mike Kelly (R-Pa.)—a leading opponent of certification whose own chief of staff attempted to distribute a fake slate of electors on the day of the insurrection, according to the January 6 committee.

Kelly, a member of the powerful House Ways and Means Committee from a heavily Republican district, was a major recipient of corporate cash. Other contributors included PACs belonging to Intel and Verizon (both of which had told Popular Information they were suspending donations to the election-rejecters), Aflac (which had said it would be pausing all its political donations for an unspecified amount of time), Johnson & Johnson, FedEx, and the spirits-producing Sazerac Company.

Lisa Malloy, an Intel spokesperson, said in a statement that the company’s PAC “continuously evaluates its contributions to ensure that they align with our policies and priorities” and that it has “implemented additional due diligence processes” over the last year “as Intel resumed contributions that were previously halted.”

She added: “We continue to divide our contributions evenly among Republicans and Democrats as we work to build a bipartisan coalition of members of Congress who share our vision for strengthening America’s semiconductor industry, innovation capabilities and technological leadership.”

Some companies stayed true to their promise not to contribute to election-rejecters—up to a point. Dow Chemical, for instance, donated to both Democrats and Republicans over the last two years, but did not give directly to anyone who had voted against certifying the results. But like other corporations that promised to cut off the insurrection caucus, the company did donate $10,000 to the National Republican Congressional Committee—which worked to re-elect election deniers and bring new ones into office.

But for many large companies and trade organizations, there was no return to normal—because they never changed their tune in the first place. Anheuser-Busch gave $139,500 to election-denying members of Congress during the 2022 cycle, in addition to a maximum contribution to the NRCC. Among the dozens of recipients: Rep. Billy Long (R-Mo.), who tweeted that the election was “RIGGED” for Biden in the run-up to January 6 and afterwards shared misinformation alleging that “Antifa thugs” were responsible for the riot.

Airlines were major supporters of stop-the-steal candidates. Delta Airlines gave $225,000 to election-denying members of Congress, according to ProPublica‘s searchable database. Southwest Airlines’ “Freedom Fund” gave $39,500 to election-rejecting candidates, including Rep. Pete Sessions (R-Texas), who tweeted on January 3, 2021 that he’d just met “with folks from ‘Stop the Steal’ at our nation’s Capitol” and “encouraged them to keep fighting.” American Airlines, which told Popular Information that it was pausing all political contributions for three months, eventually funneled $165,000 to dozens of Republicans who voted not to certify the election results, including Rep. Scott Perry (R-Pa.), who asked Trump for a pardon after helping to organize congressional opposition to certification.

Perry, whose conduct led to a referral to the House Ethics Committee, also received contributions from major corporations such as Boeing, UPS, Raytheon, AT&T, and General Motors.

“The General Motors employee-funded PAC supports the election of U.S. federal and state candidates from both sides of the aisle who foster sound business policies, support American workers and understand the importance of a robust domestic auto industry as we pursue an all-electric vehicle future,” Jeannine Ginivan, a company spokesperson, said in a statement.

United Airlines doled out a comparatively small $14,000 in contributions, but like its competitors it wrote big checks to the NRCC. A spokesperson for the company said in a statement to Mother Jones that, “We evaluate our PAC giving strategy after every cycle and our recent contributions include those public officials who support industry policies that are import to the success of United and commercial aviation.” (I contacted all of the companies named in this story for comment—only three responded: Intel, General Motors, and United Airlines.)

Toyota gave $172,000 to 59 elected officials who voted to reject the election results. One of the members it supported was Rep. Andy Biggs (R-Ariz.), who floated the idea of having state legislatures invalidate the election results in their states in a text message to then-White House chief of staff Mark Meadows, according to a report in Talking Points Memo.

Contributions to election-rejecting politicians flowed in from the world of professional sports, too. Major League Baseball gave $7,000 to two members who voted to throw out the election results after the riot—Reps. Steve Scalise (R-La.) and Virginia Foxx (R-N.C.)—and another $15,000 to the NRCC. The National Football League’s Gridiron PAC was far more generous, donating $72,500 to 28 members of Congress who voted to overturn the results and another $30,000 to the NRCC. Recipients included Reps. Kelly, Kevin McCarthy (R-Calif.), and Jim Jordan (R-Ohio)—who said before January 6 that “I don’t know how you can ever convince me that President Trump didn’t actually win this thing.”

After the insurrection, the Florida-based grocery store chain Publix released a statement condemning “the deplorable actions that occurred” and distancing itself from Julie Fancelli, an heir to the company who reportedly helped fund Trump’s rally on the Ellipse that preceded the riot. But the 29 election-rejecting beneficiaries of Publix’s largesse in 2022 included Rep. Ralph Norman (R-S.C.)—who in a text to Meadows 11 days after the insurrection called for the president to invoke “Marshall Law!!” to prevent Biden from taking office.

Still, even these corporations had to draw a line somewhere. Paul Gosar (R-Ariz.), didn’t receive any contributions from corporate PACs, and Marjorie Taylor-Greene (R-Ga.) received just $2,500 from a Mississippi-based bank. Both Republicans were censured and stripped of their committee seats for their behavior during the 117th Congress—Gosar for posting a meme of himself murdering a colleague, and Taylor-Greene for, really, a whole lot of things. To some of the nation’s leading companies, voting to overturn an election might be forgivable. Losing your political influence is not.