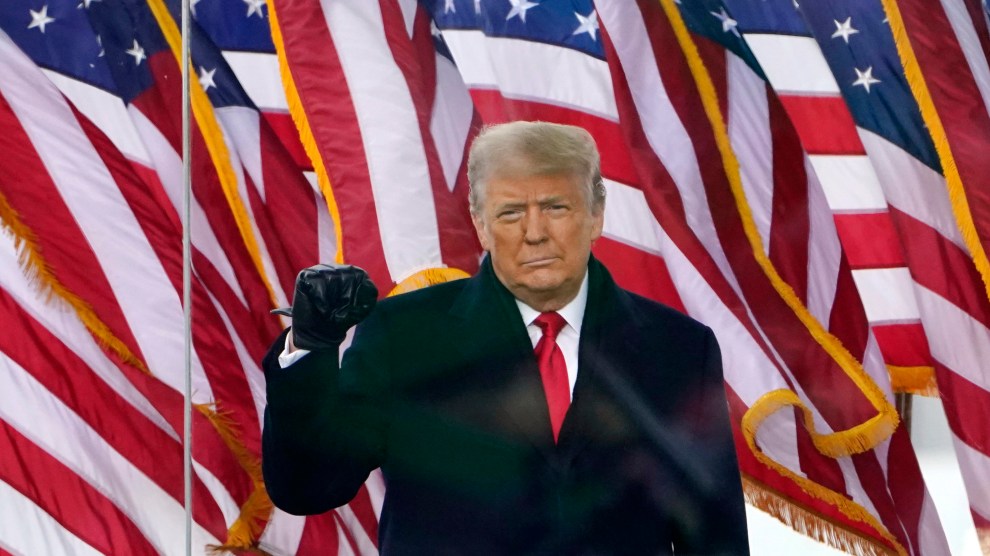 Trump holding a rally near the White House shortly before the siege of Congress on Jan. 6, 2021Jacquelyn Martin/AP

Soon after Elon Musk purchased Twitter in late October, the tech mogul reinstated Donald Trump’s account, which the company had shut down permanently after Trump used Twitter to help instigate the January 6 insurrection. The twice-impeached ex-president hasn’t tweeted again yet, instead sticking to posting on his own far less influential and financially shaky Truth Social platform. But he is planning to use Twitter again soon and his presidential campaign is actively seeking his reinstatement on Facebook, according to news reports this week.

As Trump eyes the White House in 2024, his desire to once again exploit social media platforms with vast reach is no mystery. A tsunami of political advertising and misinformation deployed by his 2016 campaign on Facebook was widely credited as key to that year’s election victory. He later used Twitter not only to galvanize a delusional movement to overturn his 2020 election loss but also to distract from and dominate news cycles throughout his four years in office.

Trump’s influence is comparatively tiny via Truth Social; he has under 5 million followers there, versus more than 88 million on Twitter and 34 million on Facebook. Yet, that has not prevented him from further stirring random extremist violence with lies, deranged conspiracy theories, and demonization of his alleged enemies. Trump long ago honed this incitement technique, known to national security experts as stochastic terrorism. It is a destabilizing and ongoing danger to the nation—and one certain to scale back up with Trump’s return to mainstream social media.

Political violence provoked by Trump and extremist allies who now mimic his playbook has indeed continued ever since the attack on the Capitol and Trump’s banishment from Twitter and Facebook. Central to the phenomenon, of course, is the endless lie from Trumpworld that the 2020 election was supposedly stolen through fraud. (Many official investigations and court proceedings proved it was not, and Trump knew so.)

In the past few weeks, that false narrative apparently motivated a series of shooting attacks at the homes of four Democratic officials in Albuquerque, New Mexico. The alleged ringleader was 39-year-old Solomon Peña, a defeated GOP candidate for the state legislature, who, according to court documents detailed by the Washington Post, is accused of hiring several gunmen as well as participating in the drive-by attacks. No one was injured in the late-night shootings, but bullets that pierced through drywall at one house narrowly missed a state senator’s sleeping 10-year-old daughter.

“The individual that we’re charging believed in that conspiracy… he did resort to violence as a means to find justice.”

Peña lost in November by a nearly 2-to-1 margin but claimed the election was rigged against him, according to authorities, and had first gone to the homes of Democratic officials to confront them verbally. Albuquerque Police Chief Harold Medina told the Post he has no doubt that Peña was motivated by Trump’s false claims of election fraud: Peña regularly expressed extreme views on social media, Medina said, and boasted of attending Trump’s “Stop the Steal” rally in the nation’s capital on Jan. 6, 2021. “The individual that we’re charging believed in that conspiracy,” Medina told the Post. “He did believe that his election was unfair and he did escalate and resort to violence as a means to find justice.”

The violent conspiracy in New Mexico is just the latest chilling example. In October, an aggrieved and possibly delusional 42-year-old man broke into the San Francisco home of then-House Speaker Nancy Pelosi, where he brutally attacked her elderly husband Paul with a hammer. The suspect, David DePape, had been fixated on far-right conspiracy theories and propaganda online. According to charging documents, he told investigators his intention was to kidnap the House speaker and “break her kneecaps” while interrogating her. Among the gear he brought for his hostage plan were zip ties, an item carried by multiple January 6 perpetrators. He further stated that he regarded Nancy Pelosi as the “leader of the pack” of lies told by the Democratic Party, and that he saw himself as similar to Americans during the Revolutionary War, “fighting against tyranny without the option of surrender.”

The DOJ charged a Tennessee man in mid-December for plotting to murder FBI agents who investigated his actions at the Capitol on Jan. 6.

Trump and his allies have long vilified the Justice Department and FBI, escalating their fury when the FBI raided Mar-a-Lago in August to seize highly classified documents hoarded by the ex-president. Violence at the hands of a pro-Trump extremist came three days later, when an Ohio man named Ricky Shiffer donned tactical gear, armed himself with an AR-15, and went to the FBI field office in Cincinnati. After failing to breach the facility, he fled and later died in a shootout with law enforcement. Shiffer, 42, was a frequent user of Trump’s Truth Social site, where he’d responded to the raid by telling Trump supporters to be ready “to jump into civil war.” A Navy veteran who also claimed to have been at the Capitol on Jan. 6, 2021, he called for stocking up at gun stores with “whatever you need to be ready for combat” and posted that “patriots are heading to Palm Beach” and should kill any federal agents who try to stop them.

In mid-December, federal charges unsealed in a January 6-related case again highlighted the ongoing threat fueled by Trump and MAGA extremism. The DOJ alleged that a Tennessee man previously arrested in connection with the attack on Congress had since plotted to murder FBI agents who investigated his actions on January 6. Edward Kelley, 33—who the DOJ previously said assaulted police and was among the first to violently breach the Capitol Building—allegedly conspired with another individual to attack an FBI field office in Knoxville. According to the complaint, a witness said Kelley collected intelligence on law enforcement agents involved in his case and had a hit list for conducting “assassination missions.”

Trump repeatedly has vowed pardons and a government apology for “many” January 6 participants if he is elected president in 2024. A spokesperson for him said this week that January 6 defendants are “political prisoners” who have gotten “unfair treatment.”

Trump continues to lie and provoke through various media outlets, of course, but Twitter and Facebook were force multipliers like no others for his unfiltered messaging. Facebook’s parent company, Meta, said Wednesday that it is considering Trump’s reinstatement and will make a decision “soon” that is “in line with the process we laid out” with a two-year ban on Trump after the insurrection. That process included handing the decision to an oversight board; according to a June 2021 statement from Meta executive Nick Clegg, “At the end of this period, we will look to experts to assess whether the risk to public safety has receded. We will evaluate external factors, including instances of violence, restrictions on peaceful assembly and other markers of civil unrest. If we determine that there is still a serious risk to public safety, we will extend the restriction for a set period of time and continue to re-evaluate until that risk has receded.”

They need look no further than the very halls of Congress to see the enduring peril. Just three days before Shiffer set out to attack the FBI field office in Cincinnati, staunch Trump ally Paul Gosar used social media to urge existential war over the law enforcement operation at Trump’s residence.

“We must destroy the FBI,” the far-right Arizona congressman tweeted.

GOP leaders, now in charge of the House and beholden to the party’s election-denying Freedom Caucus, just gave Gosar and several extremist colleagues seats on the powerful House Oversight Committee.