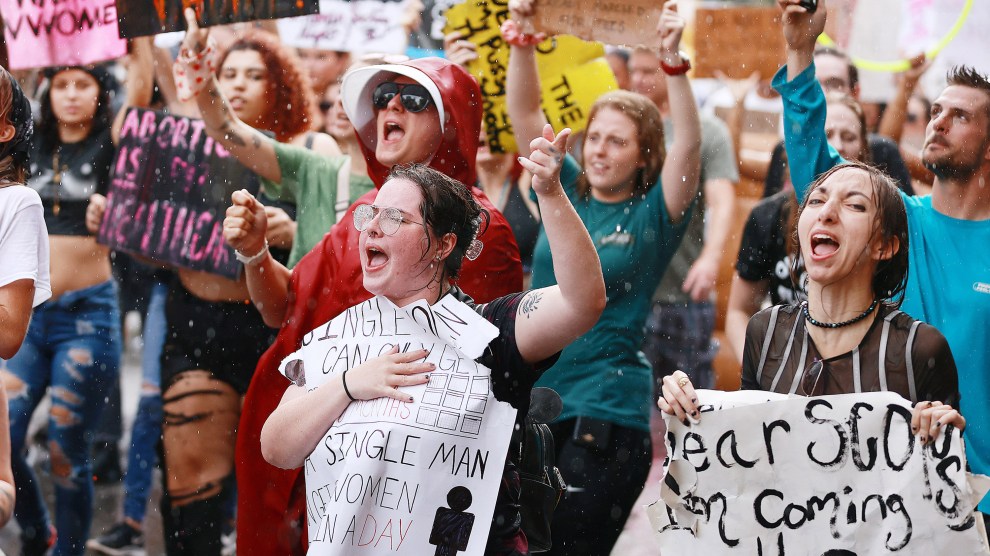 Vice President Kamala Harris marked the 50th anniversary of the Roe v. Wade Supreme Court case by lamenting that the Supreme Court had overturned the constitutional right to an abortion and announcing a series of Biden administration efforts to ensure access to medication abortion. She spoke in Tallahassee, Florida, to about 1,500 abortion rights supporters at a venue not far from the state capitol and the residence of Republican Gov. Ron DeSantis.

“For nearly 50 years, Americans relied on the rights that Roe protected,” she said. “Today, however, on what would have been its 50th anniversary, we speak of the Roe decision in the past tense.”

Harris urged Congress to pass a bill protecting reproductive rights—highly unlikely given the current GOP control of the House—but she also emphasized the Biden administration’s short-term efforts to expand access to medication abortion. “Members of our Cabinet and our administration are now directed, as of the president’s order, to identify barriers to access to prescription medication and to recommend actions to make sure that doctors can legally prescribe, that pharmacies can dispense, and that women can secure safe and effective medication,” she said.

As Becca Andrews, author of No Choice: The Destruction of Roe v. Wade and the Fight to Protect a Fundamental American Right, has reported in Mother Jones, medication abortion pills, mifepristone and misoprostol, are a crucial defense against attacks on reproductive rights. But they remain inaccessible to many, from people in abusive relationships to those who live in rural areas without reliable internet access. It remains unclear how President Biden’s memorandum, which promises to “protect access to medication abortion” and “safeguard patient security and privacy,” will address the needs of the most vulnerable abortion seekers.

A White House official said that Harris’ address took place in Florida because the state was “at the forefront of the fight against these efforts to further restrict reproductive freedom.” Florida enacted a 15-week abortion ban last year, but the state’s dozens of abortion clinics remain important destinations for people living in more restrictive Southern states who need abortions early in pregnancy.

Her speech took place several days after thousands of anti-abortion advocates gathered in Washington, DC, for the annual March for Life. As my colleagues Abby Vesoulis and Emily Hofstaedter reported:

Galvanized by the Dobbs decision, many March for Life protestors expressed having a renewed sense of energy and purpose. Members of the Catholic clergy chanted the “Hail Mary” as they marched past the Smithsonian. Two blocks away, a jumbotron screen replayed graphic videos of fetuses being dismembered, featuring text overlays stating, “This is her only baby picture.” Outside the Supreme Court, people knelt down to pray as women nearby on microphones shared tales of abortions they regretted.

Clearly, the debate over the future of reproductive rights in the United States is far from settled. Watch Harris’ full address here: