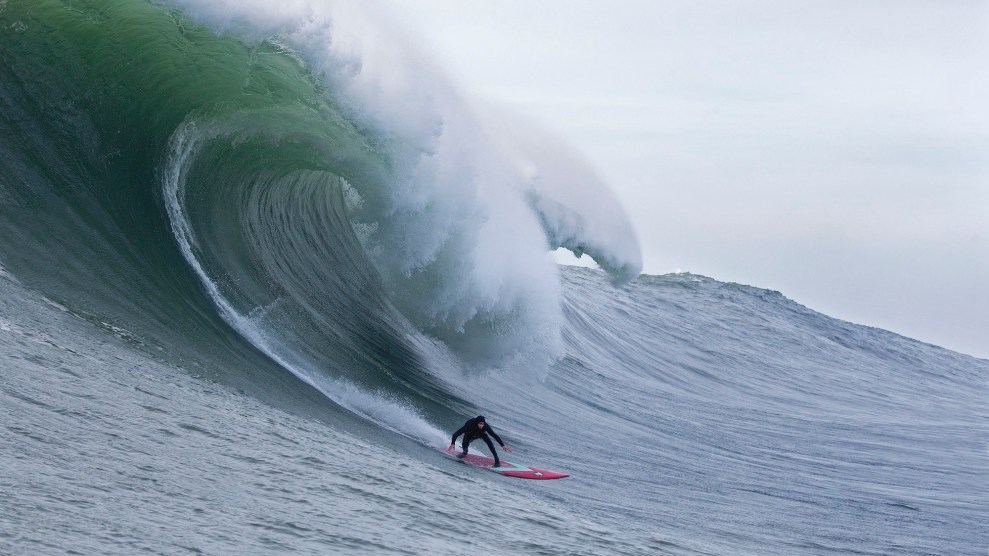 This content was written by Randi Druzin and paid for by MUD\WTR; it was not written by and does not necessarily reflect the views of Mother Jones’ editorial staff. See our advertising guidelines to learn more.

Growing up in Santa Cruz, California, a coastal city known for spectacular beaches, Kyle Thiermann was drawn to the ocean and idolized surfers whose innovative aerials and successes in conquering progressively bigger waves earned them fame and fortune. He gravitated toward Mavericks, a surfing location 50 miles north of his home, where waves rise as high as six-story buildings and break violently enough to snap a surfboard in two. “It was scary as fuck but I started training to surf out there when I was 23 years old,” he says. “That focus and preparation for a single goal was invaluable.”

The skills he developed there in Half Moon Bay have enabled Thiermann, who now works for MUD\WTR, a California-based beverage company whose products are made with organic ingredients, to make his mark as an athlete and activist dedicated to protecting the natural world.

By the time he tackled Mavericks, Thiermann had developed into a top-notch free surfer—an athlete who forgoes competition to chase waves on his own. His exceptional strength, agility, and instincts helped him attract sponsors when he was still a teenager. But when he looked closely at those companies, he was disappointed to learn they weren’t committed to the welfare of the oceans, which played a central role in his life, or to the planet. He ended those sponsorship deals and vowed to align himself with companies interested in making positive change in the world.

Through research he learned that Patagonia was affiliated with the Rainforest Action Network, an environmental organization at which Thiermann volunteered. Convinced that the outdoor clothing retailer was “one of the few corporate giants that tread lightly through nature,” he reached out to founder Yvon Chouinard. The two environmentalists met and, within months, Patagonia was providing Thiermann with surfing gear and financial backing for a new initiative—traveling to locations around the world to surf and make short films focusing on environmental issues.

The first film in his YouTube series Surfing for Change revealed that Bank of America was underwriting construction of a coal-fired power plant in a port town in Chile. That film led to an appearance at a TEDx event in Santa Cruz in 2011.

Thiermann strode onto the stage in a wetsuit, holding a surfboard. He gave an impassioned speech, assuring audience members that they could help create positive change in the world by making small adjustments to their daily lives. He urged them to move their money out of Bank of America and into local banks, which many did. The talk and its results elevated Thiermann’s profile as an activist.

His YouTube series, which also examined the benefits of shopping locally and the harm caused by single-use plastics, earned him a handful of awards and landed him on the pages of several magazines. In 2014, HuffPost included him on its list of inspirational people.

Thiermann has stepped up his efforts to be an agent of positive change. In 2018, he co-created the Motherfucker Awards, a satirical awards show recognizing corporations that have harmed the environment. Comedians portraying the corporate heads accepted the awards at the sold-out event, at a theater in Inglewood, California. In a press release, Thiermann and co-creator Chris Ryan joked that they had “always wanted to get sued by a multinational corporation.”

Now 32, Thiermann sees self-care as critical both to his performance as an athlete and to his work as an activist—work that is ever more demanding as climate change continues to devastate the lives, health, and livelihoods of people worldwide: “You have to put your oxygen mask on first before helping others.”

Thiermann has educated himself about the role sleep plays in our health. Its importance has been emphasized by experts such as neuroscientist Jeffrey Durmer, who draws links between sleep deprivation and obesity, mental health issues and myriad diseases. Thiermann bemoans the fact that Americans sleep an average of just six hours a night, down two hours from 50 years ago.

“For me, learning what a big impact sleep has on my ability to perform physically was a wake-up call,” Thiermann says. “Cardio is such an important part of surfing and I need a good night’s sleep to exert myself for any sustained period.”

Thiermann’s evening ritual now includes drinking MUD\WTR’s sleep-supporting product, :rest, which consists of natural, organic ingredients. The company also offers a viral coffee alternative called :rise. Thiermann works as head of editorial content for MUD\WTR because, he says, the company is as dedicated to health and wellbeing as he is. Its products have helped improve the mental, physical, and emotional wellbeing of consumers who have incorporated them into their daily rituals. “In the way that Patagonia is working to keep our environmental landscapes intact, MUD\WTR is working to keep our mental landscapes intact,” Thiermann explains.