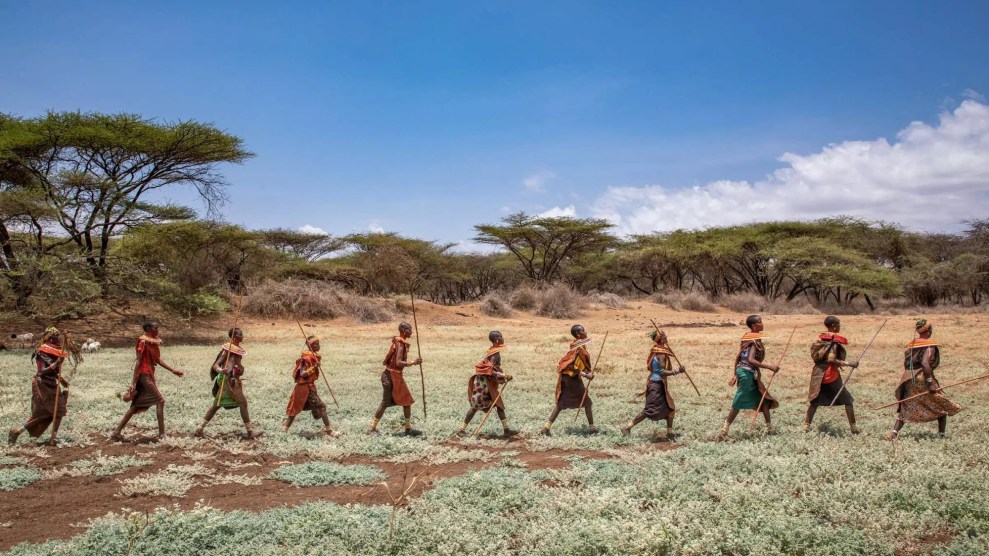 Women from six villages around Ngilai, Kenya gather for a daily ceremony asking the gods to provide rain.Ezra Millstein

This content was written by Florence Nasieku Lesoloyia, Senior Private Sector Engagement & Financial Inclusion Officer, Mercy Corps Kenya, and paid for by Mercy Corps; it was not written by and does not necessarily reflect the views of Mother Jones' editorial staff. See our advertising guidelines to learn more.

When I joined Mercy Corps last summer, after more than a decade of working in banking, I was eager to begin the next chapter in my career by serving a community that is close to my heart. I was born in Samburu County in northern Kenya, and now I’m working with people in the towns where I had been raised. From my ties to the Samburu community, I deeply understand the challenges our participants face, their needs for their children, and how we can best support women in our programs. I have also witnessed the resilience from our communities, especially during this moment of an unprecedented drought that has ravaged the region.

In the Horn of Africa, at least 18.4 million people—including 10 million children—are facing severe food shortages and require urgent humanitarian aid. In Kenya, the drought is affecting over 80% of the country, with some of the worst impacts felt in Samburu County. A part of my role as a senior program officer is to support families with cash aid so they can purchase groceries and to ensure that communities have an adequate supply of food to purchase. Mercy Corps is also providing increased access to water supply through borehole repairs, installation of water vending machines, and cleaning waterholes. In another county, Mercy Corps is helping farmers to sell off livestock in order to earn income and reduce the burden of caring for animals in drought-affected areas.

On my daily visits to check in on participants affected by the drought, I had met women at water points who asked me to join in on prayers with them before I headed into the villages. They had told me about how women from surrounding villages gathered every day for a water ceremony at a local dam and reservoir that I knew very well. In my childhood, I had brought livestock to drink from that same reservoir and had fetched water from it as well.

Recently, I had the chance to follow along with the women as they made their way to the reservoir that was once teeming with life. Mothers and grandmothers left their villages in scorching heat. For hours, the women prayed, sang, and splashed milk in the air as they walked, stopping often to gather in a tight circle and raise their voices to the sky. I was stunned to see the parched landscape, the earth cracked and all of the vegetation had dried, when we finally arrived at the Lesepe Dam. It was heartbreaking to see the devastation from the drought in a place that had once been familiar to me.

During the ceremony at the dam, the women sang prayer songs praising the gods for all they have done. I was overcome with emotions and joined in with my own voice. For a moment, I had forgotten that I was there for work, and I was enveloped by the passion of the songs we sang together. The drought has affected each person differently, while the impact is felt widely by all, so praying for rain is deep and personal.

Women have traditionally been responsible for the water ceremonies because men would migrate with the livestock in search of pasture away from home during drought spells. Women and children remain at home and will often feel more of the impact of the droughts. During the ceremony, I felt the women’s faith calling the heavens for rain, and their pain was palpable. I could feel their power and strength in my heart. There is the saying that home is where the heart is—and I was home for a moment.