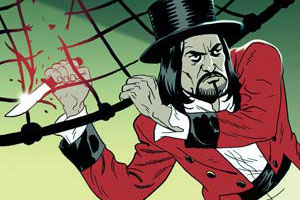 john snow won’t have to worry about his retirement. When he left the csx railroad to become George W. Bush’s second treasury secretary, he took with him a $2.5 million annual pension. The figure was based on 44 years of employment at csx, never mind that Snow had been there for only 25 (during which, incidentally, he brutally cut safety and maintenance, to the point where a jury awarded a widow $50 million in punitive damages after a derailment—money paid by the taxpayers because of a little-known law that insulated Snow and his company from the costs of his egregious judgment). That kind of boost is unheard of for the rank and file, but not at all uncommon for corporate executives and owners.

Snow’s case is typical of the way corporate executives have, for the past 35 years, managed to gild their retirement benefits even as they hollowed out workers’ pensions. It started with the 1974 Employee Retirement Income Security Act, the law ostensibly designed to ensure that workers could collect the retirement benefits they’d earned. erisa brought some important reforms—including establishing the federal Pension Benefit Guaranty Corporation (pbgc) to help workers whose pensions went bust—but it also was riddled with favors to business. And in the decades since, legions of lobbyists have helped create numerous new loopholes, exemptions, and special deals. The result is two separate and unequal pension systems: Executives get the equivalent of antebellum mansions, while workers get leaky shacks liable to collapse at the first harsh economic wind. Here are 10 of the key ways in which it happened. (Be warned: This stuff gets a bit technical. Washington is full of people who are very well paid to figure out insanely complex ways to take money from you and me.)

The Top Hat Club: In erisa, lawmakers put a cap on how much of an employee’s pay companies could count in calculating his retirement benefits. The reasoning was solid: Congress let companies take a tax deduction for money they put in their pension plan, but didn’t want to extend that taxpayer subsidy to the highest-paid workers. The cap rises with inflation; this year it amounts to $245,000. That is more than 99 percent of workers earn, but it is also far below what top executives are paid.

So to guarantee a retirement in keeping with the income they are accustomed to, executives have created their own plans, known appropriately enough as Top Hat plans. If you thought ceo pay was lavish, consider this: Most of the numbers you see reported don’t include retirement benefits, even though they typically raise compensation by about a third. And since these funds are separate from the regular workers’ pensions, executives have no personal motivation to safeguard the latter.

The government does not guarantee these executive benefits; in theory, if a company ends up in bankruptcy, creditors can take the money. But as Diana B. Henriques and I showed in a 1996 series for the New York Times, in practice executives get nearly every cent (and some even double their money) when their companies fail. The reason? Executives of bankrupt companies threaten to walk unless they get their pension money in full, but promise to stay and help rehabilitate the firm if their money is guaranteed.

The Tax Dodge: Contributions to pension plans are tax free, but companies have to pay taxes on the money they put into Top Hat plans—a cost that can amount to several billions over the years for a large firm. How do companies pay for that extra cost? First, they shortchange the rank and file by reducing their benefits. (Workers are often told their benefits must be cut because of competition; they just don’t realize that the competitors are their own bosses.) Second, they buy tax shelters—depriving the Treasury of revenue that must be made up by the rest of us.

The Bonus Bonus: Under most pension plans, workers’ benefits are calculated based on salary and years worked. However, a number of subtle rules tend to reduce these benefits—such as averaging pay for the last five years on the job, excluding overtime and bonuses, etc. For executives, it works exactly the opposite way: Benefits are maximized by counting only their highest-paid year, bonuses and supplemental pay are included, and so on. In calculating Snow’s pension, for example, csx even counted the 250,000 shares of stock it gave him. Based on similarly generous pension rules, controversial ceo Jack Welch left General Electric in 2001 with a pension worth $9 million a year, and Lee Raymond retired as ceo of ExxonMobil in 2006 with a lump-sum pension payment of $98 million.

The Social Security Swindle: erisa allowed com­panies to reduce prom­ised pension benefits by the equivalent of most of a worker’s Social Security check. Thus, if a secretary were due a pension of $1,000 but could expect $732 in Social Security, she might receive as little as $400 from the pension fund. (Thanks to the Tax Reform Act of 1986, only half a pension can be taken away via the Social Security offset.)

Prudent Man’s Hand: When you buy an annuity (which is essentially an individually financed pension plan), the insurance company that manages it will invest primarily in high-quality, safe corporate bonds. Had Congress held to this sound accounting principle, few pension plans would be in trouble today. But instead, Congress in 1974 created a “prudent man test” for plan managers, who were expected simply to look to what others in their field were doing. Soon, plans were falling over each other chasing the higher returns to be found in stocks and even hedge funds; at the same time, pension lobbyists worked to kill laws limiting pension investments in stocks.

The Phantom of the Pension Fund: In erisa, Congress allowed companies to treat their own estimates of how much their pension investments would earn as if they had actually earned that much, even when the true returns were much smaller. Thus, a company can estimate that it will earn 8 percent, actually make 3 percent, yet still value its pension plan as if it had made the higher amount. In theory, this process, known as “smoothing,” is supposed to account for fluctuations in asset valuations over time. In practice, it means that pension plans can become filled with phantom assets. At one point in 2004, the New York Times reported, the entire net worth of General Motors was accounted for by these imaginary investment gains in its pension plans. (The fanciful accounting practice has since been limited somewhat.)

Under erisa, if a plan had $1 in assets for each dollar owed in benefits, no more tax-deductible money could be put in. (In 2006, that ceiling was changed to $1.50.) So when the stock market was riding high, companies would stop making pension contributions even though they were flush with profit and could afford to put money aside. In the ’80s and ’90s, some big firms like General Electric, ibm, and US Steel went years without adding a dime to their pension plans because the soaring stock market made the funds appear flush. Then the inevitable cyclical declines came, leaving some plans deep in the hole—and with the economy weakened, companies claimed they couldn’t afford make-up contributions.

The Boehner Bungle: Under the 2006 Pension Protection Act, a misleadingly named law sponsored by Rep. John Boehner (R-Ohio), now the House Republican leader, companies can convert single-employer plans to multi-employer plans. A little-noticed side effect: If those pension plans fail, the maximum government guarantee is no longer $1,000-plus per week, but about $250 per week. Public disclosure is limited, so it’s hard to tell how many companies have done this.

40 Is the New 60: Since 1985, more and more companies have switched from traditional “guaranteed benefit” pensions to a new system, called a cash balance plan, that is a mixture of the traditional pension and a 401(k)-type plan. A cash balance plan typically costs a company about 20 percent less than a traditional pension plan and can cost workers 40 and older half their expected retirement benefits. Yet the federal courts have rejected claims by ibm employees and others that this amounts to illegal age discrimination.

The Deep Freeze: Once upon a time, only troubled companies shut down their pension plans. But in the last decade, ibm, Neiman Marcus, and many other healthy companies have done effectively the same thing by freezing their plans, meaning that employees’ benefits will not go up no matter how long they work for the company. Other companies, including Alcoa, Nissan North America, and Lockheed Martin, have kept their plans going but barred new hires from joining, while others yet (such as DuPont) cut newly accrued retirement benefits by as much as two-thirds.

The Coming Bailout: In February 2008, just as the stock market was beginning to tank, the three-person board of the pbgc (Labor Secretary Elaine Chao, Treasury Secretary Henry Paulson, and Commerce Secretary Carlos Gutierrez) ordered the agency’s staff to sell some of its bond holdings and buy stocks and hedge funds instead. Fortunately, that didn’t happen. Still, as of last September 30 the guaranty corporation owed $11.2 billion more to workers in failed pension plans than it had available to pay them. And while the feds could simply boost employer premiums to the pbgc to make up for the shortfall, a likelier outcome is a taxpayer bailout if (or when) more plans fail. At least this time the money will go to elderly people who did nothing to bring on their misfortune.

Back when Congress created the contemporary pension system, the idea was that workers’ benefits (which are really just wages deferred to old age) should be guaranteed even if their employers failed. Executives’ benefits, meanwhile, were supposed to be risky, tied to their companies’ fortunes.

What we now have is the opposite. Nearly 44 million workers are at risk of not being paid the benefits they are due. But few executives will miss out on their golden years.