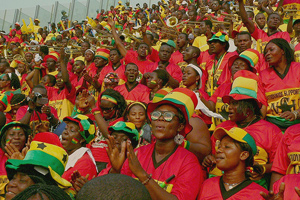 The stands will be slightly less studded with red, yellow, and green at the Ghana-Uruguay World Cup game today in Johannesburg. One thousand Ghanaian football fans, bankrolled by their government to cheer on the Black Stars, have been sent home due to lack of funding. (North Korea pulled off something similar, but didn’t even send their own citizens).

The fans were called back one day before Ghana’s game against the United States last Saturday, which the Black Stars handedly won 2-1 in overtime. No other African teams have advanced to this stage; in fact, Nigeria’s president suspended their national team because of their poor showing this year. Ghana’s historic victory has advanced the team to the final 8, the third African nation to do so (Cameroon in 1990, and Senegal did the same in 2002). None have made it to the semifinals.

According to myjoyonline.com, a Ghanaian news service, the budget included visa fees, hotel accommodation, feeding, medical support, transportation and match tickets. In a statement signed by Deputy Minister of Information Samuel Okudzeto Ablakw, “Government indicated that it had budgeted for 15 days and though the Black Stars have qualified for the next round it was imperative for the supporters to be brought back home since government wants to keep within its budget and maintain prudence.”

Some Ghanaian citizens, questioning the validity of such spending, are demanding that the budget be made public. In response, the statement said that “once the fans return and the final computations are made, the cost of the entire exercise will be made public.” Though politically stable by regional standards, Ghana has a GDP ($1500 per capita) nine times less than that of Uruguay ($12,700 per capita).

Both teams today entered the tournament as underdogs: this is Ghana’s second appearance in the World Cup, and Uruguay is the first South American team other than Brazil and Argentina to advance this far since Peru in 1978 (though, in all fairness, Uruguay is a blend of past glory and underdog verve, having won this tournament twice—in 1930 and 1950, the first and fourth World Cups to take place). Uruguay (ranked 16th in the world) is largely favored to win, given that three of Ghana’s (ranked 32nd) best players may sit out due to injuries.

The Black Stars are the last remaining African team in this year’s World Cup, and enjoy a great deal of fan support from Africa and beyond. With tens of thousands of seats filled and vuvuzelas humming like a plague of locusts, a few less Ghanaians will go mostly unnoticed. It is a reminder of the economic and social challenges that many African nations face, compared to that of their American and European counterparts. But the torch that the Black Stars carry, the hope of a continent to win the tournament on its own soil, is a potent symbol of the Africa’s resolve.