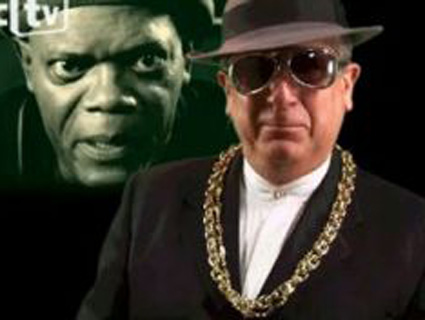 Randall Terry, who is concurrently running for president of the United States and for Congress in Florida, is suffering the wrath of actor Samuel L. Jackson, who is going after the anti-abortion activist. With a vengeance.

Jackson, you may recall, made an ad for a pro-Obama super-PAC, in which he implores voters to “Wake the fuck up!” In response, Terry made his own ad, which he says has aired on more than 100 TV stations. It accuses Jackson of “carrying water for racists,” among other things. (It also contains graphic images of aborted fetuses.)

Terry also set up an accompanying website, www.uncletomjackson.com, to broadcast his “faux-Dr. Seuss rhyme” entitled, “The New Uncle Tom.” In the video, Terry is dressed as “Sir Reginald Bling” and raps about Jackson’s alleged betrayals of his race using lines from his own movies:

When Obama and Biden work themselves to a fit, they picked up the phone, called 9-1-holy shit. Send a man who will “Die Hard with a Vengeance” for us, and a man who will stay in the back of the bus. You’re darn right we’ll work, no you just stay calm. Get Samuel L. Jackson to play uncle Tom.

The ad, the rap (which accuses Jackson of advocating “Black genocide”), and the website haven’t gone unnoticed by Jackson. He’s threatening to sue Terry and the TV stations that air the ad. In the letter from his lawyers, according to Terry, Jackson’s attorneys claim:

The Commercial states that Samuel L. Jackson associates himself with persons and organizations who advocate that “Blacks are human weeds” and want “to abort Black babies” and “sterilize Black men and women” and advocate “Black genocide.” All such statements are false, defamatory and outrageous.

The use of Mr. Jackson’s name and image to advocate the highly offensive statements in the Commercial, namely that he supposedly advocates “Black genocide,” and the other such outrageous positions discussed above, has caused Mr. Jackson to suffer substantial emotional distress… Moreover, Randall Terry maintains a website at the domain name www.UncleTomJackson.com where he refers to Mr. Jackson as “Uncle Tom” and expressly states about him: ‘Mr. Jackson is advocating the eradication of his own race.’ Mr. Jackson may seek substantial monetary damages, including punitive damages, for this violation.

Terry seems amused by all of this. He released a statement saying he will “not be bullied or intimidated by Mr. Jackson’s threats, nor will we stop running the ad. Shame on Mr. Jackson for trying to silence political dissent.”

He also points out that Jackson is facing an uphill legal battle. That’s because Terry is a political candidate, and FCC rules basically say he can say anything he wants in a political ad and it will be considered protected free speech. That’s why he’s running for office—so he can put gruesome fetus pictures in ads and stations will have no choice but to run them. In his response to the lawsuit threat, Terry essentially taunts Jackson by pointing this out. He says, “The stations are protected by FCC law from any legal action for ANY political campaign ad that runs on their stations. And I am protected by the first amendment—not to mention the truth.”

On Wednesday night, I spoke with Charles Harder, an attorney with the law firm Wolf, Rifkin, Shapiro, Schulman & Rabkin in Los Angeles representing Jackson (and Hulk Hogan). He was surprised to learn that Terry had used his firm’s threat letter in a press release, perhaps a sign that he neglected to do a Google search on Terry before threatening to sue him. (Of course Terry would use a legal threat for publicity!) Harder told me he hadn’t seen the release so declined to comment, and after I sent it to him, he didn’t respond to calls or emails. Score one for Terry.