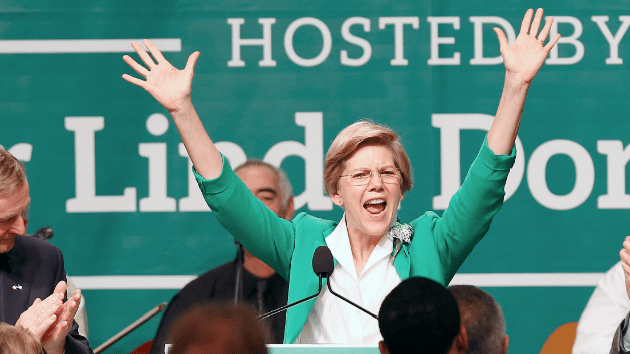 Democrats’ chances of keeping control of the Senate in 2014 don’t look great. FiveThirtyEight polling guru Nate Silver recently predicted that “Republicans are now slight favorites to win at least six seats and capture the chamber,” and the Washington Post‘s Monkey Cage blog gives the GOP an 80 percent chance of taking the Senate in 2014. Sen. Elizabeth Warren (D-Mass.) isn’t up for election this year. But the liberal darling is throwing her name—and her fundraising mojo—behind an effort to preserve the Dems’ majority.

Warren has already raised $1.2 million this election season for 22 Senate candidates, including Sens. Jeff Merkley (D-Ore.), Dick Durbin (D-Ill.), and Barbara Boxer (D-Calif.), according to Warren’s political operation. That’s a lot of dough. “Most members of Congress are not capable of raising that much for their colleagues…She’s a rock star,” says Viveca Novak, the editorial director of the Center for Responsive Politics, which tracks the influence of money on politics. And in late March, the Massachusetts senator expanded her 2014 efforts even further, joining up with the Progressive Change Campaign Committee (PCCC), a liberal PAC, to endorse two lucky Senate candidates: Rick Weiland, who is running to replace outgoing Democratic Sen. Tim Johnson of South Dakota, and Rep. Bruce Braley, who is vying to take the place of retiring Sen. Tom Harkin (D-Iowa).

Landing a Warren endorsement is great news for candidates without a lot of name recognition at the national level, says John Halpin, a senior fellow at the liberal Center for American Progress. Weiland, the South Dakota candidate, says Warren’s endorsement has been “extremely helpful” so far, adding that after Warren and the PCCC sent out their fundraising pitch, “there was quite a spike [in donations] in the first couple of days.” (The Weiland campaign does not yet have final fundraising numbers for the initial Warren-PCCC push.)

Officials with the Braley campaign say the same thing. The campaign couldn’t give out fundraising details, but an Iowa Democrat familiar with Braley’s campaign says, “Let me put it this way. There’s a reason why the [Warren] endorsement was rolled out before the March 31 fundraising deadline.”

Warren’s office says that the senator is spending so much time fundraising for her colleagues “because she believes it is critical for Democrats to maintain control of the Senate.” But the back-scratching is good for Warren’s political future, too—whether or not she ever runs for president. “I see mixed motives that are not incompatible,” says Ross Baker, a professor of political science at Rutgers University. “The hero’s wings she wins for campaigning for congressional progressives can be pinned on again in a future presidential effort. It is a win-win for her.”

Warren’s involvement could also help Democrats running in 2014 by raising party enthusiasm, Baker says. “You get a real progressive hero like Elizabeth Warren involved and she can basically amp up the motivation of the party, and people on the left,” he argues. Only about 40 percent of Americans go to the polls on off years, as opposed to 60 percent during presidential-election years. But “as popular as she is, it will take more than Elizabeth Warren’s energy to stem the tide,” he jokes. He adds that if the stars align for Dems in other ways as well—if support for Obamacare increases, and GOP candidates continue to make offensive comments about rape, for example—the push by Warren and the PCCC could help “change the atmosphere in November.”

PCCC’s association with Warren goes way back. The group pushed President Obama to appoint her as head of the Consumer Financial Protection Bureau. (Obama ended up appointing Richard Cordray to run the agency instead.) It backed her run for Senate in 2012, and sells bumper stickers that read, “I’m from the Elizabeth Warren wing of the Democratic Party.” But this is the first time the group and the senator have jointly endorsed candidates. PCCC and Warren “definitely…plan on endorsing more [candidates] together in the coming months,” says Adam Green, the group’s cofounder.

It’s not a one-way relationship. Although PCCC benefits from its association with Warren, the relationship gives her access to its email list of nearly a million progressive Dems who are potential Warren donors.

Green hopes that the Warren-PCCC alliance will have resonance beyond 2014 by helping drag the Democratic party away from the center. The Democratic Congressional Campaign Committee (DCCC) supports progressive candidates in deep-blue states, but tends to back more centrist Dems in red states. The Warren-PCCC strategy turns this logic on its head, moving to the left, not right, to lure voters, out of a belief that many Americans view policies like preserving the social safety net and regulating Wall Street not as “fringe things, [but] mainstream things that a lot of people want,” Halpin says. If the tactic pans out in 2014, Green says, it could become a new model going forward for national Dems.

Halpin says if the Warren-PCCC model succeeds, it could develop into something similar to the tea party movement, a “long-term…grassroots strategy to take over a party.” But don’t compare Warren to the tea party’s Alaskan darling, Halpin says. “She doesn’t strike me as a Sarah Palin going around beating people down or saying who’s a true conservative and who’s not.”