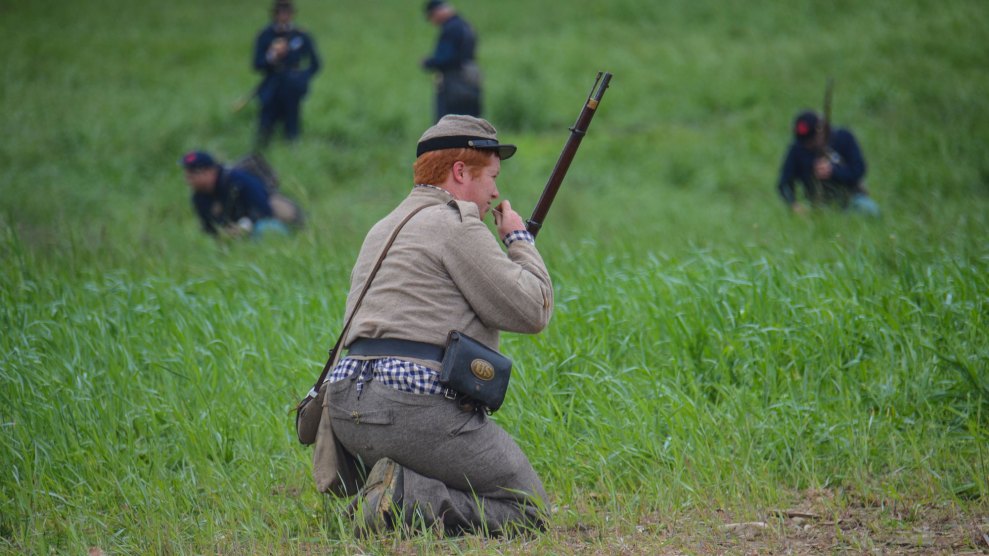 Civil War re-enactors (above). Corey Stewart (not pictured) stoked controversy in the Virginia GOP primary by opposing the removal or Confederate monuments.m01229/Flickr

And that’s why they call it the Lost Cause.

Corey Stewart, a Minnesota-born lawyer with a soft spot for the Confederacy, nearly pulled off a stunning upset in Tuesday’s Republican primary for governor of Virginia. But lobbyist and former  former Republican National Committee chair Ed Gillespie, the party’s 2014 nominee for US Senate, held on by the narrowest of margins. With 99 percent of precincts reporting Gillespie just barely ahead of the one-percent threshold needed to avoid a recount.

Stewart had been a co-chair of President Donald Trump’s Virginia campaign. He struggled to gain traction through most of the gubernatorial raced but seized on the removal of Confederate and white-supremacist monuments in New Orleans this spring, promising to protect Virginia’s Confederate statues if he was elected governor.

Nothing is worse than a Yankee telling a Southerner that his monuments don't matter.

Politicians who are for destroying the statues, monuments and other artifacts of history are just like ISIS. pic.twitter.com/qoGYGe1l5S

No Robert E. Lee monument should come down. That man is a hero & an honorable man. It is shameful what they are doing with these monuments.

It almost worked. By the end of the campaign, “Establishment Ed” was likewise reportedly running digital ads talking up his support for the monuments.

Gillespie will face Democratic Lt. Gov. Ralph Northam in November, in what is likely to be the most-watched contest of the 2017 election season. He’ll have his work cut for him; Democratic turnout exceeded Republican turnout in Tuesday’s primary by roughly 150,000 votes.