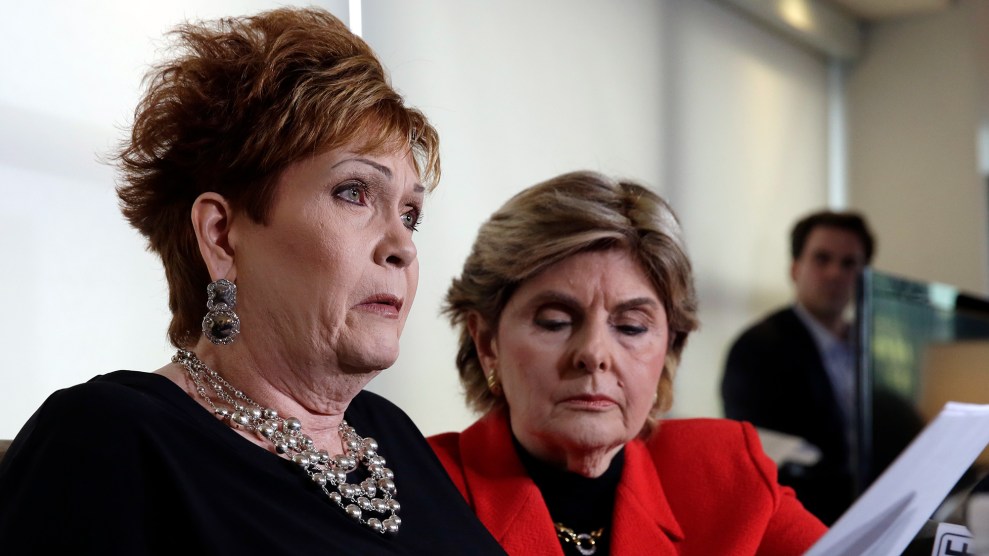 An Alabama businesswoman, Beverly Nelson Young, says Republican Senate candidate Roy Moore sexually assaulted her when she was 16—making her the fifth woman to accuse the former Alabama state Supreme Court Chief Justice of unwanted advances or sexual misconduct when they were teenagers.

Young made the allegations during an emotional press conference in New York Monday afternoon, flanked by her lawyer, Gloria Allred. At the time of the alleged incident, Moore was serving as a district attorney for Etowah County, Alabama.

The new accusation comes in the wake of allegations detailed in an explosive Washington Post story last week that Moore once molested a 14-year-old girl and initiated inappropriate relationships with other teenagers. In a radio interview with Sean Hannity last Friday, Moore emphatically denied ever meeting the 14-year-old girl, but could not rule out the possibility he pursued teenage girls.

Reading from a prepared statement, Young said that Moore picked her up in his car from a restaurant where she worked as a waitress, and offered her a ride home. Instead, he pulled the car over in a darkened location and attacked her, Young said. He then “began squeezing my neck attempting to force my head into his crotch,” she said, adding she was prevented from escape when Moore locked the car door.

“I was twisting and struggling and begging him to stop,” Young said. “I had tears running down my face.” Before letting her leave the vehicle, she said that Moore told her not to tell anyone about the incident because no one would believe her. Young said she woke up the next day with bruises on her neck.

Allred, Young’s attorney, said that Young had previously only disclosed the alleged assault to close family members, including her mother, sister, and her now-husband.

“She did not, however, speak out publicly because she feared Mr. Moore and the power he had,” Allred said. “Today, however, inspired by Mr. Moore’s other accusers she has found the courage to break her silence.”

Republican calls for Moore to bow out of the race strengthened Monday, with Senate Majority Leader Mitch McConnell definitively saying he believed the women, and that Moore needed to “step aside.”

Moore defiantly shot back at McConnell’s statement by suggesting the majority leader resign instead.

Over the weekend, a former colleague who worked with Moore in the 1970’s and early 80’s told CNN that it was “common knowledge” that Moore dated high school girls as an adult man in his 30s. “Everyone we knew thought it was weird,”  Teresa Jones, a former deputy district attorney, said. “We wondered why someone his age would hang out at high school football games and at the mall, but you really wouldn’t say something to someone like that.”