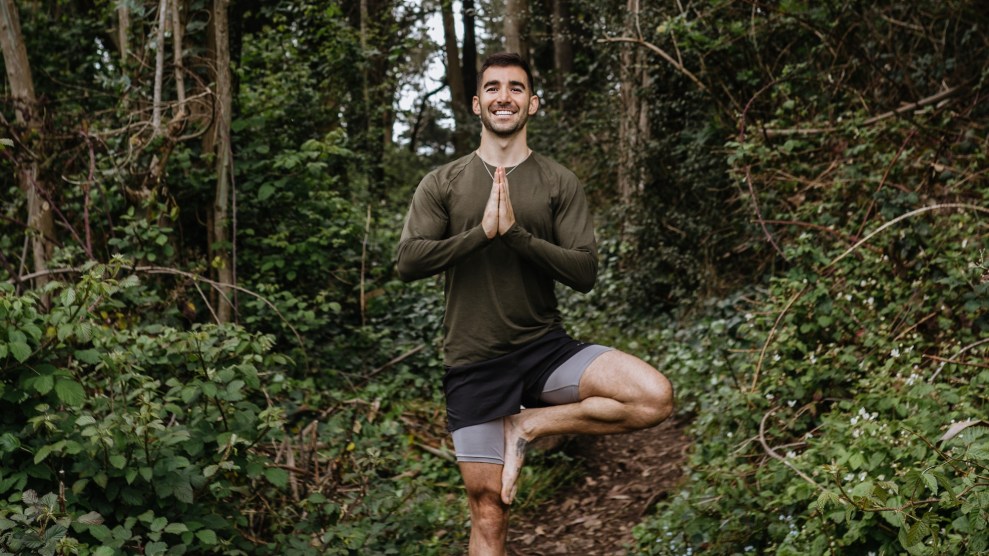 
This content was written by Randi Druzin and paid for by Plant Your Change; it is not written by and does not necessarily reflect the views of Mother Jones’ editorial staff. See our advertising guidelines to learn more.

From wildfires to hurricanes and the cascading impact of melting glaciers, the climate is in crisis. With the Trump administration and Wall Street banks making matters worse, many people are asking how they can make things better.

Although there’s no single answer, there is a simple one: Plant a tree. Because trees absorb and store carbon dioxide as they grow, planting billions of them worldwide is among the most effective and inexpensive ways to counteract climate change.

Aspiration, a neobank dedicated to providing environmentally responsible services to the general public, is helping with forest restoration.

Through a new initiative launching this week, Plant Your Change, individuals can round up their purchases to the nearest dollar, and plant a tree with each of those transactions. The program was launched for Aspiration customers in April, and is now expanding to include everyone no matter what debit or credit card they use. Anyone, not just Aspiration customers, can participate. Upon opting in to Plant Your Change, individuals can limit the number of trees they want to plant per week or pause the planting process at any time.

“By rounding up your purchases, you’re making a big impact,” says Dave Coast, a Los Angeles-based nutritionist who has been an Aspiration customer since 2017. “It adds up quickly if you’re spending on your debit card. This initiative is rooted in capitalism, but it’s doing something good.”

Working with Eden Reforestation Projects and Arbor Day Foundation, Aspiration customers’ spare change helped plant over a million trees by July—enough to absorb around 24,000 tons of carbon dioxide a year. The number of trees planted via Plant Your Change has climbed to more than 3 million, and Aspiration CEO Andrei Cherny says that “the initiative is accelerating.”

“There are hundreds and millions of people who are not Aspiration customers, but who want to make a difference. We have given them a way to do that,” Cherny says, explaining the rationale behind the program’s expansion. “Plant Your Change is part of what Aspiration is all about; helping people connect their money with the power to make a positive impact.”

“I’ve been concerned about the environment for quite a while,” says Coast, whose interest in the natural world grew out of his interest in holistic health. “I was looking at various ways to make a difference, and planting trees appealed to me the most. It’s healing to be out in nature and among trees.”

Cherny is passionate about Plant Your Change because he has been interested in environmental issues since the 1990s, when the he was recruited by Bill Clinton to work in the White House. A recent Harvard University graduate, Cherny worked directly with Vice President Al Gore and was inspired by his environmental activism. When Gore told Americans that urgent action was needed to tackle the climate crisis, Cherny took note. He carried this message with him as he forged a career in law, business, publishing, and politics—serving as an adviser to many prominent Democrats, including Barack Obama and Joe Biden.

In 2013, Cherny co-founded Aspiration. The platform was designed to enable socially and environmentally conscious customers to “align their money with their morals,” he told Anna Hrushka of Banking Dive earlier this year.

“I was interested in finding a way to make the financial industry more fair and equitable, and a positive force in our lives,” Cherny explains.

Aspiration’s dedication to generating positive change is resonating with a growing number of Americans. With more than 1.8 million customers, it is one of the fastest-growing online financial firms in the United States. Actors Leonardo DiCaprio and Orlando Bloom are among its investors.

“The growing popularity of Plant Your Change is understandable,” says Cherny. “Climate change is a serious problem, and many people feel helpless to address it. Plant Your Change allows individuals to make an enormous impact, just a few cents at a time.”