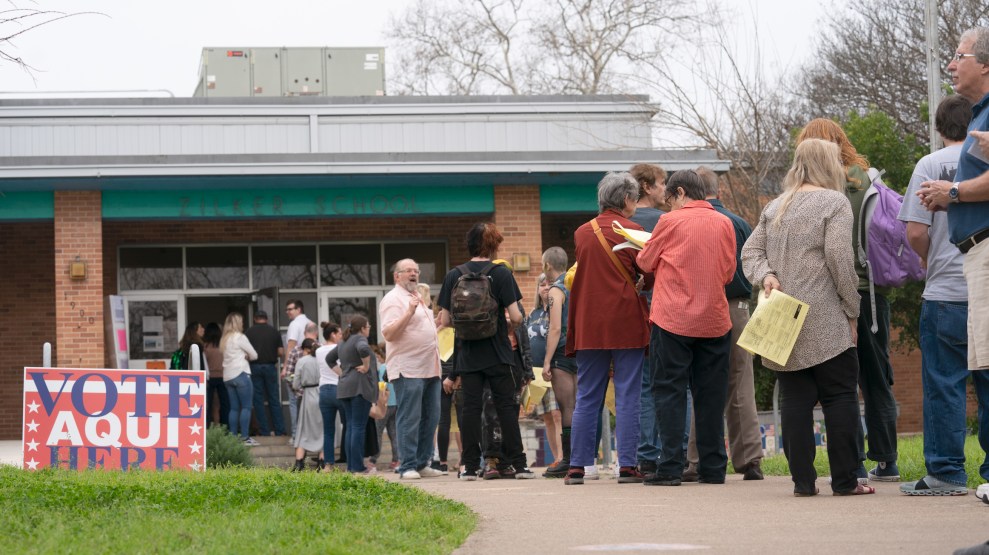 Super Tuesday in Texas offered the perfect example of the Republican war on voting rights.

Texas residents experienced hours-long lines throughout the state. Even minutes before polling places closed at 7p.m. CST, Democratic primary voters still waited in line to cast their ballots. Adding to the inconvenience were extra miles some residents had to travel. This was no accident, but the direct effects of Republican politicians and their war on voting rights. As my colleague and voting rights expert Ari Berman tweeted:

He explained that the problems of voting access began with a 2013 Supreme Court decision:

One of those states released from the Voting Rights Act was Texas. According to an analysis by the Guardian, “The 50 counties that gained the most Black and Latinx residents between 2012 and 2018 closed 542 polling sites.” That’s compared to a mere 34 poll closures in the 50 counties with the least gains in Black and Latinx population growth, often with white Republican majorities. In total, as Berman noted, Texas successfully shuttered 750 polling places.

In December, House Democrats in Washington fought back and passed legislation that was meant to restore some heft to the Voting Rights Act. Berman wrote:

The bill would also require all states to get federal approval for election changes that are known to disproportionately affect voters of color, such as strict voter ID laws, tighter voter registration requirements, and polling place closures in areas with large numbers of minority voters.

Even though the Lone Star state has long been a Republican stronghold, shifting demographics over the past decade has threatened their dominance. All this may offer the possibility that in 2020 this red state could swing blue—provided voters are able to get to the polls.