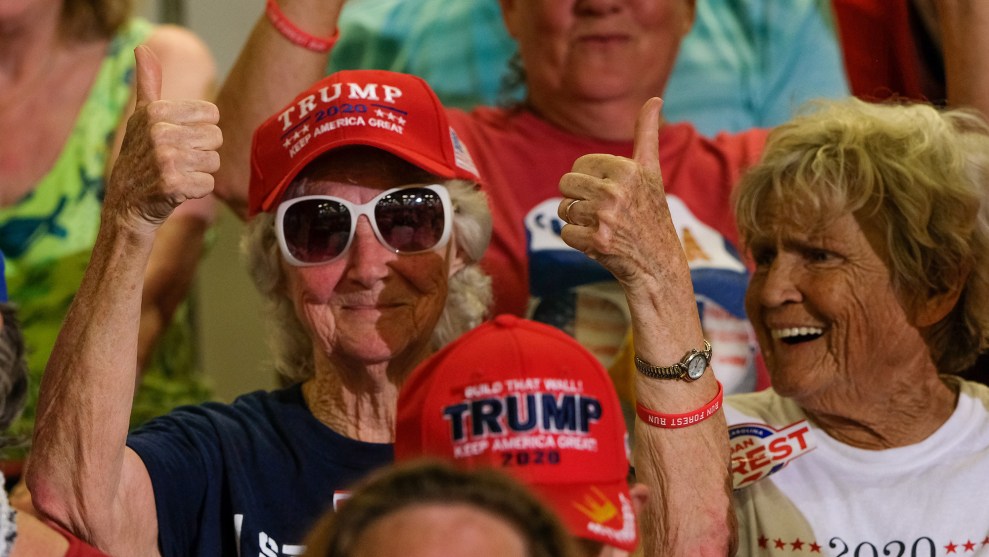 President Donald Trump’s campaign ran an ad on Facebook Friday illustrating the campaign’s struggle with how to tarnish his rival, former Vice President Joe Biden, while also energizing its base. In this case, can it attack the presumptive Democratic nominee for being 77-years-old without alienating senior voters who are crucial to the Trump campaign’s coalition?

It looks like they may be trying to find out. The ad, which was first posted last month, features an unflattering, black-and-white image of Biden surrounded by question marks. The text reads: “He’s How Old?”

The ad was part of a larger digital push to lure people to fill out an online survey, an aspect of the campaign’s strategy to keep supporters engaged, capture their contact information, and grow its lists. The image about Biden’s age on Friday was used in at least 38 Facebook ads nationwide. Some iterations targeted older people. In one, the image was sent to women over 65 in Florida and West Virginia. Another sent the image to only 18-24 year-old men in Florida.

The attack on Biden could backfire and remind voters that Trump is no spring chicken himself.

The Trump campaign’s legendary 2016 digital operation was known for throwing everything at the wall to see what stuck; they boasted about how many variants of ads they ran on Facebook to test which message, which text, or which image engaged supporters most. It’s possible this is part of a similar test designed to see whether attacks on Biden’s age work, and with which demographics. But the attack on Biden could backfire and remind voters that Trump himself is no spring chicken, having just celebrated his 74th birthday this month. It also comes as Trump’s support among seniors is dropping, perhaps the greatest threat to his re-election.

That erosion of support among a once solid demographic goes a long way to explaining why, with less than six months until the November elections, polls consistently show Trump losing to Biden. People over 65 were a key voting block for Trump four years ago when he won them by nine points, according to the Pew Research Center. But polling from as early as April showed those numbers had essentially flipped, with support from seniors shifting to Biden. Florida presents a stark example of the problem: in a must-win state where senior citizens are a powerful voting block, Trump won them by 17 points in 2016. A late April Quinnipiac poll showed Biden leading seniors in Florida by 10 points. In May, Quinnipiac polling showed women over 65 supporting Biden over Trump by 22 points. In the first week of June, a CNN poll found seniors supporting Biden over Trump 51 percent to 47 percent, a split within the polls margin of error but far below what Trump will need to win in November.

While polls were picking up on Trump’s struggles to hold his support among senior voters—particularly senior women—before the coronavirus, the pandemic has made the problem much worse. From mid-March to mid-April, the Morning Consult tracking poll showed seniors going from the age group most supportive of Trump’s handling of the crisis to the most critical. In early June, the same poll showed seniors’ net support for Trump’s handling of the crisis had ticked up just two percentage points, even as other age groups had more favorable views of Trump’s reaction to the virus. These voters are among the most at risk from the virus, and many of them may believe the president has been cavalier with their safety. In March, Trump toyed with the idea that the country should reopen, even if that meant seniors would sacrifice themselves for the economy. Since then, he encouraged protest movements pushing for reopening, in defiance of policies put in place largely to protect older Americans. He refuses to wear a mask. By mid-June, virus cases were growing particularly high in states with large numbers of seniors, including Florida and Arizona. The boomer generation remains the most concerned about the pandemic.

This is the situation in which the Trump campaign seeks out the best strategy to tarnish Biden and win back older voters. According to the Washington Post, the campaign spent much of April debating how to go after Biden as Kellyanne Conway warned that relentlessly mocking Biden’s mental acuity risked further alienating seniors.

Perhaps this ad is meant to test senior voters’ sensitivity to the age issue. But surely a better strategy would be a more conscientious handling of the pandemic that has put their lives at risk.