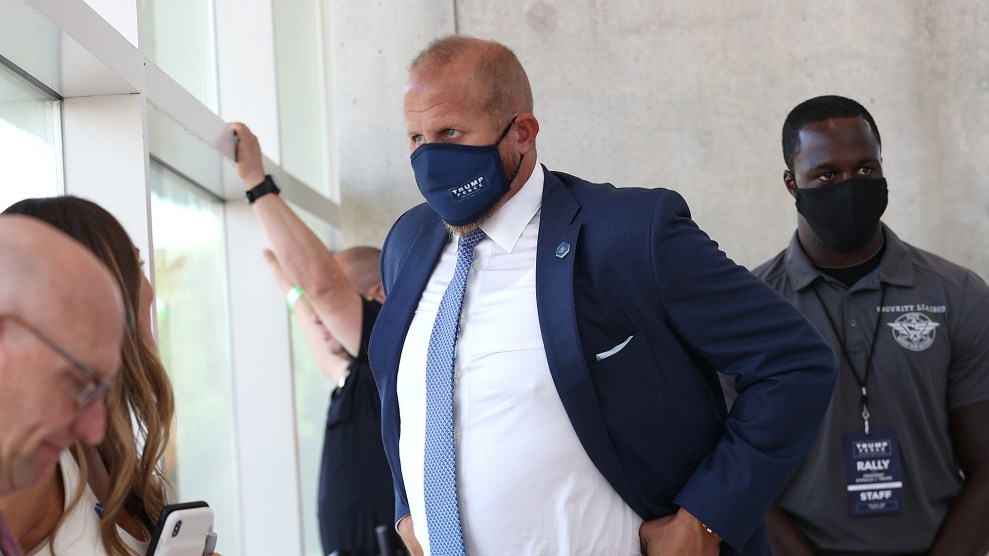 CloudCommerce, a company with a close relationship with Donald Trump’s campaign manager Brad Parscale, received $780,680 from the Paycheck Protection Program, part of the federal government’s effort to protect small businesses during the coronavirus pandemic. Despite the company’s executives having been sued for or pled guilty to fraud charges, Parscale nevertheless engineered a financial relationship with the outfit that left him owning a significant portion of its stock.

Parscale’s partnership with CloudCommerce has been puzzling to financial experts.

When Parscale was plucked from obscurity to run Trump’s 2016 digital operation, he was the joint owner of a marketing firm in San Antonio. Following the campaign’s success, Parscale and his business partner split their firm and sold both halves to CloudCommerce. Parscale also sold a second firm he controlled to CloudCommerce. ProPublica reported last year that he hoped the company’s association with his name would boost its stock price, netting him far more than the reported $10 million that he earned as part of the sale. Parscale joined the company’s board and became heavily invested in the company. He moved to Florida and opened his current firm, Parscale Strategy, directing some business back to his old firm at CloudCommerce.

But Parscale had joined forces with a company with a troubled track record, and the expected windfall never came. In 2019, according to an April filing with the Securities and Exchange Commission, CloudCommerce’s net losses totaled over $10 million. In December, Parscale stepped down from the company’s board. Most of the $10 million he made selling his company was ultimately paid in the form of generally worthless penny stock, which he still holds.

Parscale’s partnership with CloudCommerce has been puzzling to financial experts given its history. Before joining CloudCommerce, the company’s president, Andrew Van Noy, filed for bankruptcy, during which time he was sued for fraud, agreeing to pay a large settlement. His predecessor at CloudCommerce pleaded guilty to conspiracy to commit securities fraud. In March of this year, Facebook took down CloudCommerce ads promoting investment in the company, saying they violated the platform’s ban on “tactics that mislead people through exaggerated promises of guaranteed financial success.”

“Brad has absolutely no role with the company,” Trump campaign communications director Tim Murtaugh told CBS News in May, when CloudCommerce reported its loan to the SEC. “He only has preferred stock. He has no voting rights.” Murtaugh added: “He has no idea whatsoever what the company is doing. He doesn’t talk to them, they have no business with the campaign or any other company Brad is connected to.”

According to an April SEC filing, Parscale’s 34.9 percent stake makes him the company’s largest shareholder. SEC filings for 2019 show that the work that CloudCommerce-owned firms did for Parscale Strategy, which in turn does work for the Trump campaign and the national Republican party, accounted for just a few thousand dollars. Records show Parscale was guaranteed 5 percent of revenue generated for CloudCommerce by his former firm, an arrangement that could have earned him up to $1.3 million. It’s unclear if the money ever materialized. In June, CloudCommerce said it had no political clients.

“All intangible assets and goodwill related to the Parscale Media and Parscale Creative acquisitions have been written off.”

Parscale now distances himself from CloudCommerce, but the feeling appears to be mutual. CloudCommerce, which recently hyped its procurement of a large dataset and reoriented its business model around data analysis for customers, has concluded that its association with Parscale is a financial loser. While CloudCommerce initially estimated its association with Parscale and his firms’ “goodwill” were worth millions of dollars, in its latest annual SEC filing it announced those properties had negative goodwill and wrote them off as losses. “All intangible assets and goodwill related to the Parscale Media and Parscale Creative acquisitions have been written off, amounting to $744,444 for Parscale Media and $6,016,323 for Parscale Creative,” the company told regulators. CloudCommerce did not not report a devaluation of goodwill for its other subsidiaries.

In June, CloudCommerce announced that it expected to net $14 million dollars in revenue in 2020 despite the pandemic and economic downturn, and, despite years of losses, it projected a net income of $1 million. That press release did not mention that it had also received a loan of close to that much from the federal government.