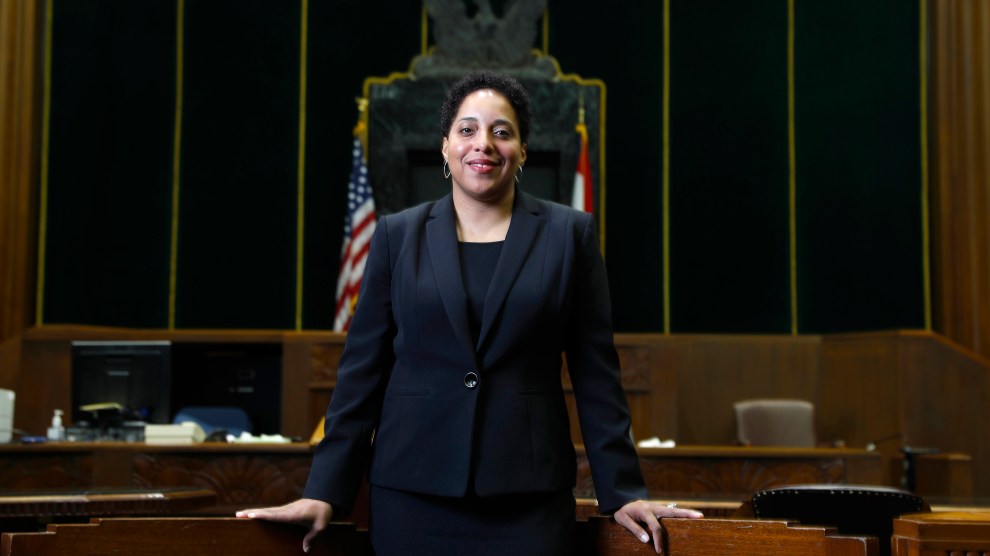 Update, August 5: Kim Gardner won the Democratic primary on August 4 against challenger Mary Pat Carl, taking 60 percent of the vote. Gardner is now heavily favored to win the general election in November against her Republican opponent, Daniel Zdrodowski. “Tonight, the voters of St. Louis used their voice to send a message that they want to continue on the path of reform we started together four years ago,” she said after the results came in.

In July, St. Louis prosecutor Kim Gardner revealed that she had found a terrifying note on her car. “I hope you hang from a tree,” it read.

Gardner, the first Black woman to serve as circuit attorney in St. Louis, was elected four years ago after pledging to make the criminal justice system more fair for people of color. (Like a district attorney, a circuit attorney is a chief prosecutor for a particular jurisdiction.) While in office, she has faced incredible pushback. Most recently, President Trump objected when she filed criminal charges against a white couple who pointed guns at Black Lives Matter protesters walking through the couple’s gated community in June; he told the conservative Townhall Media that Gardner’s decision to prosecute them was “a disgrace.”

Dozens of progressive prosecutors around the country have come to Gardner’s defense.

The hate mail quickly flooded her inbox. “It is YOU who are the racist, unfairly targeting white McCloskeys for exercising their 2nd Amendment rights,” someone emailed her, according to the Washington Post, referring to the gun-toting couple. “U really need to be run out of town you black b—-!”

On Tuesday, Gardner is up for reelection. In the primary, she faces Mary Pat Carl, a white prosecutor who used to work in the same office but resigned from that post in 2017 after Gardner became circuit attorney. In some ways, the race will be a test of whether Gardner’s reformist bona fides can withstand the harsh backlash from Republicans, who have questioned her at every turn—offering a stark reminder of the double standards that progressive Black women often face when they’re elected as district attorneys or circuit attorneys.

Historically, a chief prosecutor’s decision on a case is the last word. People who hold this title have immense discretion to choose whom to charge with crimes, and what types of crimes to charge them with. But in Gardner’s case, politicians and courts have pushed back against her power again and again. After she was elected, a police union spokesperson described her as a “menace” who needed to be removed from office “by force or by choice.” When Gardner’s office investigated then-Gov. Eric Greitens over allegations of sexual misconduct in 2018, the police petitioned a court to appoint a special prosecutor who charged one of her investigators with perjury and got a search warrant to seize the server with her office’s emails. (Gardner later dropped the charges against the governor, who resigned.) This year, state lawmakers tried to pass a bill transferring some of Gardner’s authority to the state’s Republican attorney general.

In January, Gardner filed a lawsuit accusing her city of a racially motivated conspiracy to push her out of office and block her attempts to make the legal system fairer for minorities. Other Black women prosecutors from around the country flew to St. Louis to support her, saying she “faced an unprecedented campaign by the city’s corrupt and racist political establishment to destroy her.”  The prosecutors—including Orlando’s Aramis Ayala, Baltimore’s Marilyn Mosby, and Boston’s Rachael Rollins—could understand what Gardner was going through. They’d seen their own power questioned in unusual ways too, as I’ve previously reported:

In Orlando, Aramis Ayala, the first Black district attorney in Florida, saw some of her powers removed by the governor in 2017 after she decided to stop seeking the death penalty. Then-Gov. Rick Scott made the unusual decision to issue an executive order preventing her office from handling a case in its jurisdiction involving a murdered police officer; he assigned it and 22 other capital cases to a prosecutor in another county instead. A month later, Aramis received a noose in the mail. In September, Rachael Rollins, Boston’s first elected Black woman prosecutor, asked a court to dismiss the charges against nonviolent protesters who opposed a “straight pride” parade; a local judge refused…

After Marilyn Mosby, a Black chief prosecutor in Baltimore, flew to St. Louis in a show of support for Gardner’s lawsuit, she got a voicemail from a caller in Illinois who accused her of hating police and white people. “If we’d known you all were gonna be this much fucking trouble we would’ve picked our own fucking cotton,” the caller said. Mosby had been sued by police after she tried to prosecute officers for the death of Freddie Gray, who fell into a coma in a police van in 2015. Filing a lawsuit against a prosecutor is “essentially unheard of,” according to the Marshall Project, a criminal justice-focused news organization. A judge let the suit proceed; the Supreme Court later sided with Mosby…

“A prosecutor’s discretion is something that’s usually considered sacred,” says [Jamila] Hodge [a former federal prosecutor who now works at the Vera Institute of Justice]. “It’s only when those decisions are being made by Black women in this role, and when they’re done to the benefit of populations who have been traditionally marginalized and harmed by the system, that now prosecution’s discretion is a problem.”

Gardner filed charges on July 20 against the white couple, Mark and Patricia McCloskey, who say they pointed their guns at Black Lives Matter protesters because they feared for their lives and property. The couple—who have a history of suing neighbors, family members, and employers over various disputes—claimed the protesters damaged a gate and threatened their safety. But video obtained by the St. Louis Post-Dispatch showed protesters walking peacefully through an open gate, and keeping their distance on the sidewalk as they moved past the house. The marchers admitted to trespassing by entering the gated community, private land, on their way to the mayor’s house, but denied damaging any property.

“It is illegal to wave weapons in a threatening manner at those participating in nonviolent protest,” Gardner said in a statement when she charged the couple with unlawful use of a weapon, a felony. “And while we are fortunate this situation did not escalate into deadly force, this type of conduct is unacceptable in St. Louis,” she added. Gardner said she would not seek prison time against the McCloskeys if they were convicted, but would encourage a court to put them into a diversion program, such as community service.

Trump isn’t the only politician who publicly criticized Gardner for her decision to prosecute the couple. “We will not allow law-abiding citizens to be targeted for exercising their constitutional rights” to carry firearms, tweeted Missouri Gov. Mike Parson, who vowed to pardon the McCloskeys if they were convicted. Missouri Attorney General Eric Schmitt also posted a video on Twitter condemning Gardner, and filed a brief to the court attempting to get her case against the couple dismissed. US Senator Josh Hawley (R-Mo.), wrote that Gardner’s decision to prosecute was “an unacceptable abuse of power” and asked the Justice Department to investigate her. And the McCloskeys filed a motion attempting to disqualify her from their case because she referenced them in a campaign email seeking donations for her reelection.

Dozens of progressive prosecutors around the country have come to Gardner’s defense. They include Aramis, Mosby, and Rollins, along with Chicago’s Kim Foxx, San Francisco’s Chesa Boudin, and Philadelphia’s Larry Krasner. In an open letter released on July 22, they wrote that they had “deep concerns” about the “shameful, aggressive, and blatantly political attacks” on Gardner over the McCloskey investigation. “It is up to Missouri law and a jury composed of the people of St. Louis to determine whether the McCloskeys should be held criminally responsible for their actions, not a handful of politicians who neither live nor vote in that jurisdiction and, in some cases, do not even have any prosecution or law enforcement experience,” the prosecutors wrote.

“The disturbing intervention in this local case is reflective of a broader, dangerous pattern that we have seen far too often in recent years,” they added, referring to politicians who criticized or tried to intervene in other reformist prosecutors’ decisions to charge certain crimes or, more often, to not charge minor nonviolent offenses. “These attacks have ignored the fact that the local prosecutors were elected with a mandate from their communities to build a more effective and equitable justice system and that their decisions are squarely within the purview of the job they were duly elected to carry out.”

Even Gardner’s opponent in Tuesday’s primary election, prosecutor Mary Pat Carl has condemned the political attacks against Gardner over the McCloskey case. “These racist attacks and threats against my opponent and #women of color in general, must stop,” Carl tweeted last week. “We will not make St. Louis safer by tearing others down.” But Carl, who ran unsuccessfully against Gardner four years ago, has criticized her opponent for “being ineffective” and lacking “competence“; for a high turnover rate among attorneys in the office; for a decrease in the rate of trials that lead to a conviction; and for straining relations between the prosecutor’s office and the police. “I think you can hold the police accountable, without going to war with the police,” Carl told local radio station KMOX. She also blasted Gardner for not properly reporting some campaign contributions and flights.

“This is not about a Second Amendment right,” Gardner argues.

Meanwhile, some reform-minded activists have criticized the circuit attorney for not being progressive enough. But she has racked up several notable Democratic endorsements, including from Sens. Elizabeth Warren and Bernie Sanders, who commended her for significantly reducing the city’s jail population without increasing overall crime, and for declining to rely on the testimony of police officers accused of misconduct.

Gardner, for her part, says the racist attacks and death threats against her got worse after Trump and other Republicans tried to intervene in her case against the McCloskeys. “It’s been disheartening,” she told CNN. “This is not about a Second Amendment right,” she added later in the interview. “This is about an elected prosecutor doing their job, like they do everyday without fanfare or any political pandering that’s going on, and evaluating criminal activity in their jurisdiction.”