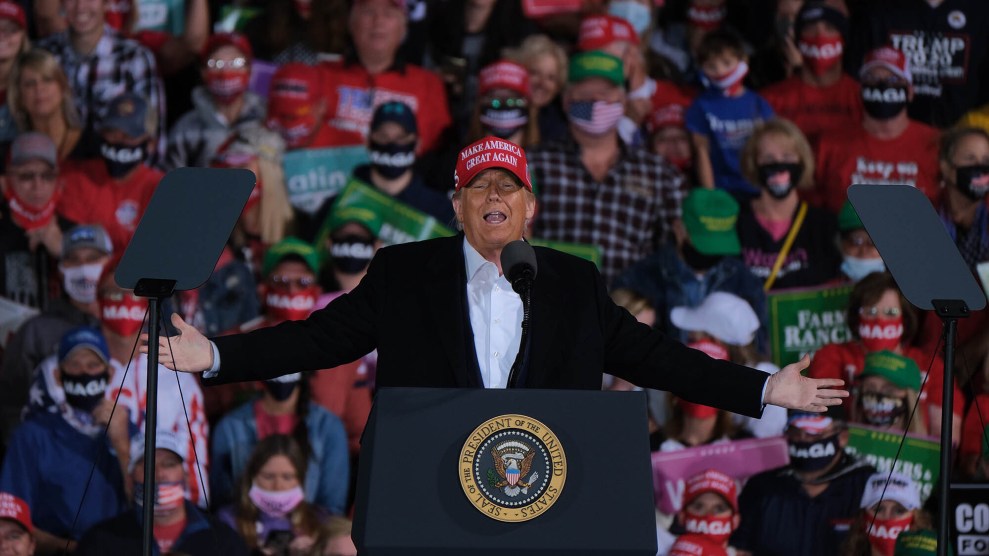 With less than three weeks until Election Day, President Donald Trump abruptly pivoted from his closing campaign message that Osama Bin Laden is actually still alive to praise US Marshalls for killing a murder suspect in Oregon last month.

Trump, speaking at a rally in Greenville, North Carolina, on Thursday afternoon, described the death of Michael Reinoehl, an antifa activist who had been suspected of shooting a Trump supporter in Portland in late August and was confronted by US Marshalls a few weeks later. What exactly happened in that confrontation is still unclear, but there are significant reasons to be skeptical of the official government narrative; the New York Times reported last month that “[i]n interviews with 22 people who were near the scene, all but one said they did not hear officers identify themselves or give any commands before opening fire” and killing Reinoehl.

“I said, ‘What happened?’ ‘Well we haven’t arrested him,'” Trump said, recalling his conversations with local authorities.

Trump: We sent in the US Marshals, took 15 minutes and it was over… They knew who he was, they didn’t want to arrest him and 15 minutes that ended pic.twitter.com/fJA5BsJVeF

There’s not really any way to spin it: Trump is describing the killing of a suspect like it was a mob hit that he ordered. He thinks it’s great what happened. This isn’t some pablum about bravery-in-the-line-of-duty and all that. He’s praising the principle of it—the efficiency with which a suspect was “removed” (to use Attorney General Bill Barr’s phrasing). Fifteen minutes, over and done with, nice and clean—as if he were discussing the Bin Laden raid or the hunting of a bear. Who needs a trial, when you can end it in 15 minutes?

These comments have been making the rounds on social media, but I think they have been slightly misread as Trump saying that the “they” who didn’t want to arrest him were the US Marshalls. It’s easy to get confused on that point, because the US Marshalls didn’t arrest him and killed the man instead. But the “they” here refers to the local law enforcement authorities in Oregon. It’s an important distinction, not because it’s in any way exculpatory—armed agents of the state killed a man who had not been convicted of anything!—but because it’s actually the heart of this whole standoff between the federal government and local authorities, in Portland most famously, but in New York City and Washington, DC, as well.

Trump is saying that Democratic officials are refusing to do their jobs and cowering to the anarchists, and only the strong man in the White House can cut through the political correctness to restore security. Michael Reinoehl is what you get, he is saying, and what he got was just and deserved. In doing so, he is placing the story of a US Marshall raid in the same space as Kyle Rittenhouse crossing state lines with a rifle to shoot two people in Kenosha, and of the McCloskeys waving firearms at protesters in St. Louis. If you will not act, then others will. In this case, the vigilante killers are federal law enforcement officers. This is both the nadir of law and order, and the truest definition of what it means.

There is just so much of this every day. Sometimes reading the news in the Trump era feels like driving on that highway from Twister—you are just trying to stay on course and dodge the cows, and as a simple survival mechanism don’t have time to dwell on any of it. But the crowd cheering here is chilling, and the president hailing a deadly raid by state security forces is dangerous and ominous as hell.