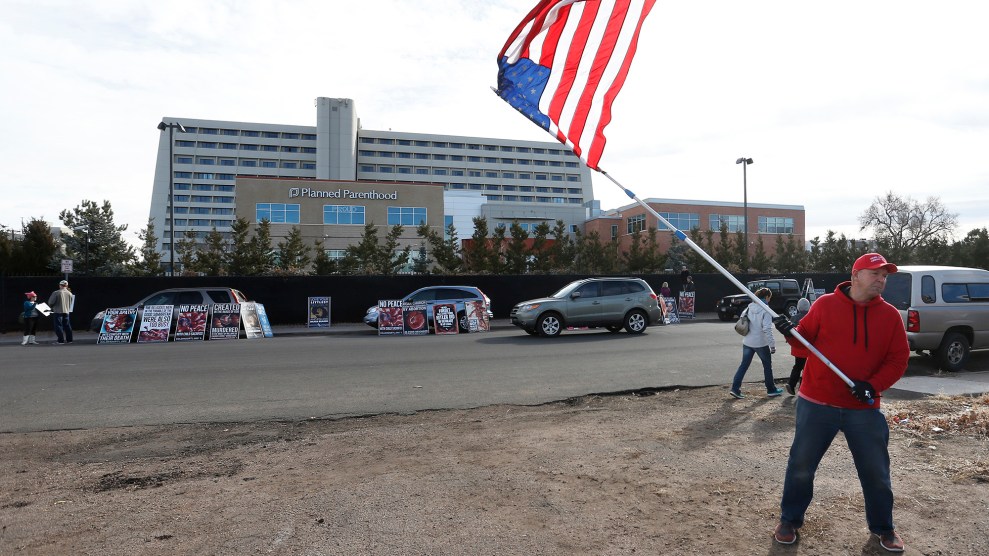 In Feb. 2017, Jeff McNamara waves a US flag during an anti-abortion rally in front of Planned Parenthood of the Rocky Mountains, in Denver.Brennan Linsley/AP

In a sea of states with strict restrictions on reproductive rights, Colorado has long been something of a sanctuary for women seeking abortions. But that could all change starting tomorrow, when voters in the state consider a ballot measure that would ban abortion after 22 weeks. Polling data says the outcome is currently “too close to call.”

Colorado is one of seven states that does not ban abortion at a specific point in pregnancy. While the ballot measure does allow for abortions past 22 weeks in cases where the pregnant person’s life is in danger, there are no exceptions built in for cases involving rape, incest, or fetal abnormalities.

Now, before anyone starts hollerin’ and getting upset about allowing “late-term abortions”—not a real medical term, folks!—let’s back up and talk about why women could need abortion access after 22 weeks gestation. Often, abortion later in pregnancy is a gut-wrenching decision made by families that wanted a child, but something has gone wrong—there’s a fetal abnormality that could not have been detected until after the 20th week, or the pregnancy is becoming a health risk to the person carrying the fetus. It is not something done on a whim. Abortions after 20 weeks are often prohibitively expensive, and can cost $15,000 or more. That’s not including the travel expenses to get to one of the just seven states where this kind of care is legal. “People from a couple dozen states every year come to Colorado to access services because they can’t get them in their home state,” says Elizabeth Nash, a state policy expert at the Guttmacher Institute. “If this ban were to be successful, all those people—and Coloradoans—would have to find another place to go.”

And while we’re on the subject of disinformation surrounding abortion, one of the groups financially supporting the ballot measure is called End Birthday Abortions Colorado. So-called “birthday abortions”—abortions that allegedly occur on the due date—are not a thing. This idea, which brings to mind President Trump’s lies conflating abortion later in pregnancy with infanticide, is crafted to feed off an emotional response; it has no basis in reality.

As Dr. Rebecca Cohen, a Denver-area doctor who provides abortion care, told the Colorado Sun: “People don’t walk into a hospital at 38 weeks and ask for an abortion. It does not happen. And no one is forced to have an abortion or provide abortion care. A physician is never obligated to do what someone is demanding and it is not something that they would do.”

The last four anti-abortion ballot initiatives considered in Colorado were soundly voted down—three of the four were efforts to classify an embryo as a person, and the fourth was an “informed consent” proposition that came with a 24-hour waiting period and mandatory counseling. The last one was in 2014; all lost by at least 30 percent of the vote.