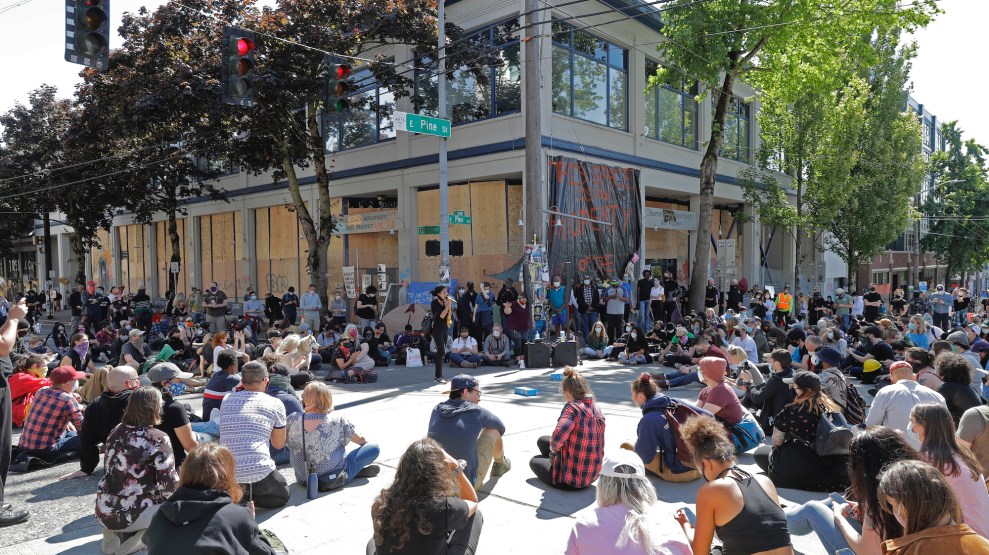 The terrifying hellscape of Seattle's CHAZ.

For much of Friday, Fox News’ website featured images of Seattle’s Capitol Hill Autonomous Zone that were clearly photoshopped to depict the CHAZ as some sort of lawless hellscape guarded by heavily armed anarchists. Or anarchist, rather—Fox News used the same guy in both photoshopped images. The doctored photos were pulled when a Seattle Times reporter called them out.

The images were a mashup of photos from different days, shot by different photographers. Protesters have taken over a handful of blocks near a recently abandoned police precinct and turned it into a cop-free zone. While there have been instances of police shooting tear gas at protesters, the CHAZ has been mostly peaceful, with protesters screening movies and setting up food gardens and co-ops. On Friday, Fox News had no disclaimers that the images were manipulated in any way. The site also included an image of buildings burning under a “Crazy Town” headline for a story about Seattle’s CHAZ. That photo was taken May 30 in St. Paul, Minnesota.

The Seattle Times‘ Jim Brunner broke the story. He writes:

The network’s misleading and faked images were published as the Capitol Hill zone — quickly labeled CHAZ — became a political flashpoint for conservatives nationally and a target of tweets by President Donald Trump, who has branded the demonstrators “domestic terrorists” and threatened federal action unless local officials “take back” the area.

In a statement, Fox News told Brunner, “We have replaced our photo illustration with the clearly delineated images of a gunman and a shattered storefront, both of which were taken this week in Seattle’s autonomous zone.” This isn’t true, as Brunner points out. The gunman photo was June 10, but the storefront images were taken May 30.

Brunner tracked down the photographer who took one of the photos.

The June 10 photo of an unidentified man with a gun standing in front of a car in CHAZ was taken by Seattle freelance photographer David Ryder, who distributed the photo through Getty Images.

The image, as displayed on the Fox News website, was spliced with other photos, including a photo of a smashed retail storefront in May, making it look as though the scene was all playing out concurrently in the autonomous zone. “It is definitely Photoshopped,” confirmed Ryder. “To use a photo out of context in a journalistic setting like that seems unethical.”

It’s a short step from manipulating the narrative around anti-racist protesters to manipulating images of them. Fox News took it as clumsily as possible. Three stories on the website now carry an editor’s note saying the “collage did not clearly delineate between these images, and has since been replaced.”

Meanwhile, on TV, Fox News mistook a Monty Python joke for a sign of political infighting within the CHAZ:

Here’s the gag being referenced: