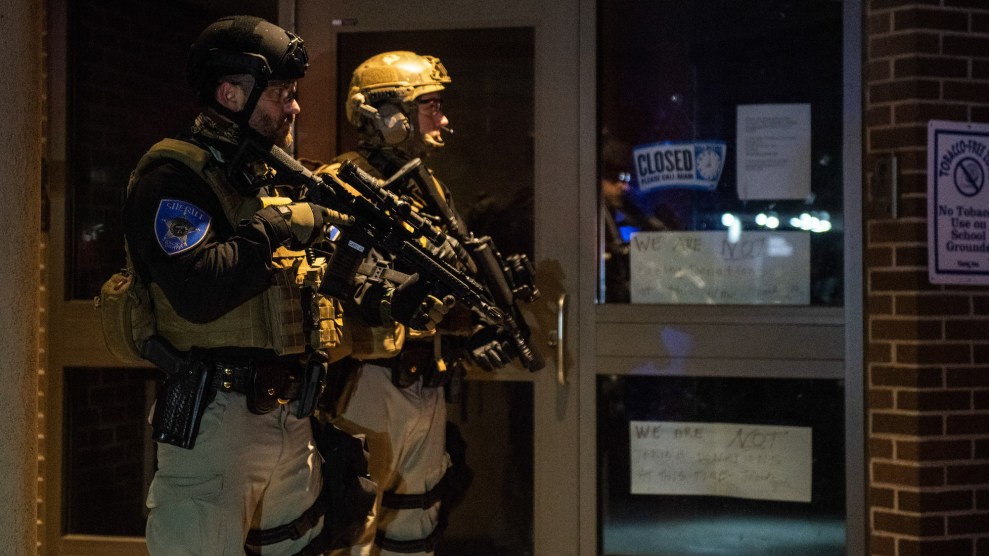 Officers patrol a gas station in Brooklyn Center, Minnesota, after the killing of Daunte Wright.imageSPACE via ZUMA Wire

Brooklyn Center, Minnesota, is a prime example of how little can change in a year. As former Minneapolis police officer Derek Chauvin stood trial for the murder of George Floyd last May, police in the Minneapolis suburb shot and killed 20-year-old Daunte Wright during a traffic stop.

When protesters assembled outside the city’s police headquarters, they were met with brutal crowd control tactics. The following day, Brooklyn Center’s city council banned tear gas, rubber bullets, and kettling. But videos show protesters getting bombarded with tear gas just 15 minutes after that resolution passed. (It’s unclear whether the gas came from Brooklyn Center police or outside agencies, which are not included in the ban.)

It’s the latest instance of police appearing to ignore the hard-won reforms that followed last summer’s uprisings. More than 30 states, along with countless municipalities and police departments, have set new rules to reduce police violence—including funding cuts, crowd-control restrictions, body-camera mandates, and bans on no-knock warrants and neck restraints—since protests on behalf of Floyd, Breonna Taylor, Ahmaud Arbery, and others killed by police rocked the country. But officers in at least half a dozen cities have allegedly violated those policies or carved out major loopholes. These flagrant work arounds throw into question how effective reforms are at controlling violent police behavior.

Last June, after several high-profile incidents—one in which police tear-gassed a child, and others where enough tear gas was used that it penetrated nearby apartments—Portland and Seattle halted the use of chemical irritants on crowds. The Portland order had one notable exception: tear gas could be deployed if police think lives are at risk. The police department invoked that exception at another protest just two days later. The alleged threat to protesters’ lives? A literal dumpster fire.

“The ink was barely dry on the order before the City violated it,” a lawyer wrote in a court filing for advocacy group Don’t Shoot Portland.

The Seattle ban was similarly ditched by police just two days after its announcement. When a man drove into a crowd of Black Lives Matter protesters and shot one demonstrator, the Seattle Police Department tweeted “CS gas has been authorized. In the interest of public and life safety, leave the area now.”

Limits or bans on neck restraints have been some of the marquee reforms of the past year. In late September, California passed a statewide ban on police use of carotid holds, a type of neck restraint that impedes blood flow to a person’s brain. (In Chauvin’s case, experts still debate whether he was attempting a carotid hold or another type of restraint on George Floyd.) Three months later, police in Antioch, California killed Navy veteran Angelo Quinto, who was in the midst of a mental health crisis. His family has filed a wrongful death lawsuit, claiming Quinto was killed by an illegal neck restraint similar to the one that killed Floyd. The Antioch Police Department denies that its officers used a knee-on-neck restraint.

In July, New York City criminalized all use of chokeholds, including “sitting, kneeling, or standing on the chest or back in a manner that compresses the diaphragm”; violating the ban is a misdemeanor offense. But in January, police in Queens were filmed kneeling on the neck of Sircarlyle Arnold, who is Black, after arresting him for riding an all-terrain vehicle. The video shows the officer continuing to kneel on Arnold’s neck even after he was handcuffed. The Queens District Attorney declined to prosecute the officer, citing “insufficient evidence of an unlawful method of restraint being used.”

In fact, the New York Police Department banned chokeholds more than 25 years ago—decades before an NYPD officer choked Staten Island resident Eric Garner to death. From 2014, when Garner died, to 2020, the New York City Civilian Complaint Review Board received 996 reports from people who said police officers had placed them in chokeholds. If anything, the rate of complaints actually increased with time—proof positive of the fleeting nature of some police reforms.

“There’s this pattern of piecemeal reform,” says Samuel Walker, a police accountability expert and emeritus professor at the University of Nebraska, Omaha. He says we shouldn’t dismiss the importance of small steps, like chokehold bans, “but what’s needed is a more systematic approach to the various kinds of abuses that officers can engage in while on regular duty.”

These piecemeal reforms, often the pet projects of progressive police chiefs, have a long, cyclical history. First, there’s a high-profile scandal—typically corruption or police brutality. That’s followed by public outcry and promises to implement the latest policing innovations. The reforms are often well received and effective, but only for a time. In a 2012 law review article on the subject of police reform, Walker recounts how that pattern played out at one Los Angeles County Sheriff’s Department station:

The station was marked by a number of problems in the early 1990s, including a high rate of officer-involved shootings, a very bad image of the Station in the community, and, within the department, low officer morale and a high rate of officer turnover…A series of changes corrected many of these problems and the number of shootings had declined substantially—despite the fact that external factors such as the crime rate and community violence remained stable.

Several management reforms contributed to this positive development…supervisors imposed stricter standards for arrests (resulting in a decline in the number of arrests), standards for selecting field training officers had been raised, and the department had reduced the number of officer foot pursuits which were related to many shootings in the past. In 2001, however, the Special Counsel revisited the station and found that standards had eroded and the number of officer-involved shootings had returned to high levels compared with other Stations in the LASD. The captain responsible for the successful reforms had transferred out.

Other reforms are thwarted by police unions, which my colleague Samantha Michaels’ reporting shows are a particularly “impenetrable barrier” to reform in Minneapolis, where Floyd was murdered. The Minneapolis police union’s hostility to reforms proposed by elected officials dates back at least 50 years. The union’s recently retired president, Bob Kroll, did everything in his power to uphold the tradition:

As head of the union, he advocated aggressive policing. Under former police Chief Janeé Harteau, he opposed policies requiring officers to intervene if they saw a colleague use excessive force. (Kroll was disciplined at least three times and was suspended from the force—until a successful appeal—for beating up a man while off duty in 2004; he reportedly lost a chunk of his ear in another off-duty fight.)

He also pushed back last year when Mayor Frey banned “warrior-style” trainings that were linked to other shootings by officers, including of Philando Castile just outside Minneapolis in 2016. The trainings espoused a “killology” view of policing that urged officers to be prepared to use more force, not less. Kroll called the ban illegal and vowed to make the trainings free for union members. “It’s not about killing, it’s about surviving,” he told the Star Tribune. He reiterated this sentiment in a radio interview in April: “Certainly getting shot at and shooting people takes a different toll, but if you’re in this job and you’ve seen too much blood and gore and dead people, then you’ve signed up for the wrong job.”

Still, Walker says there’s been a “sea change in public attitudes” around police reform. “An awful lot of states passed laws mandating de-escalation and de-escalation training,” Walker says of the immediate backlash to Floyd’s murder. “I think that’s going to become embedded in routine police practices. A lot of them passed a law requiring independent investigations of officer-involved fatal shootings—that’s not going to change. There’s a lot of permanency in that.”

But there’s still the question of enforcement. After last summer’s protests in Rhode Island, every police chief in the state pledged to implement a series of reforms, including outfitting every officer with body cameras. But in a recent letter, the ACLU of Rhode Island lamented that body camera policies are “regularly flouted, violations are rarely punished, and the transparency these cameras are supposed to provide the public is undermined.” In October, Providence police officers’ pursuit of a moped rider named Jhamal Gonsalves ended in a devastating crash. Gonsalves is now in a coma; his family has sued the city and several officers, alleging “excessive force and physical brutality.” Three of the officers involved failed to activate their body cameras.