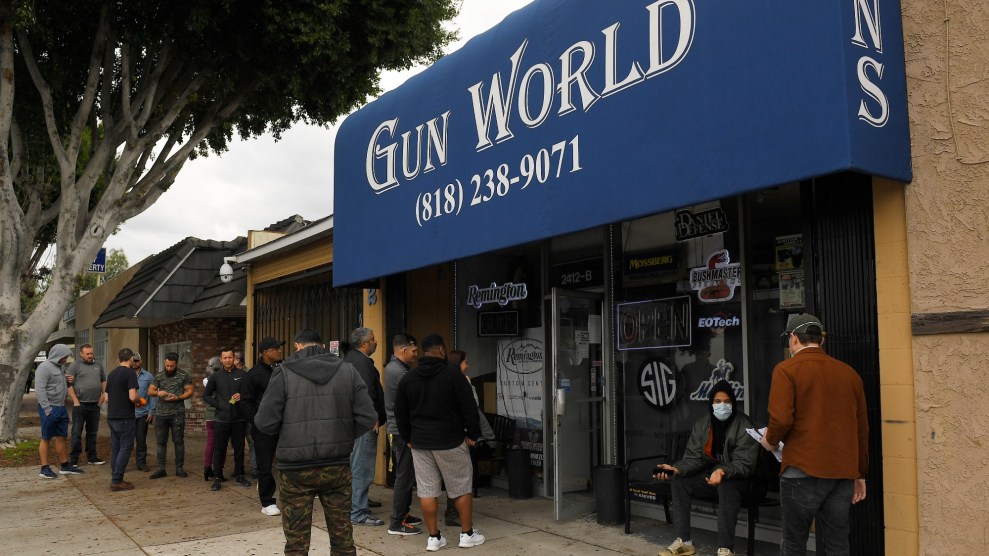 There’s a familiar scene playing out all across the country: People anxious and panicked about coronavirus are flooding stores to stock up on essential items as businesses shut down and local governments issue a stay-home-no-matter-what mandate. But along with food, water, and toilet paper, there’s another item that’s seeing a surge in sales thanks to pandemic panic: guns.

Gun stores and firearm dealers throughout the country are reporting a big spike in sales due to coronavirus-related fears. In February, weeks before the full gravity of the coronavirus situation sunk in, the FBI’s background check system had already reported that it had 2.8 million inquiries from potential gun-buyers—up from 2 million during this time last year, and the third-highest monthly total since the agency created the system in 1998, according to the Washington Post. Since then, the situation has only worsened, with news reports and social media posts of people lining up outside of gun stores trying to arm themselves in case their worst fears becoming a reality. But the surprising reality is that it is not just preexisting gun owners stockpiling ammo and adding to their armories in a time of crisis. Many dealers have said that a lot of sales have been to first-time gun buyers, who are purchasing a firearms as a way to protect themselves amid fears that the coronavirus situation could lead to a complete societal breakdown.

That’s a talking point ripped straight from the National Rifle Association, who in the past few weeks has been using the coronavirus crisis as an opportunity to stoke paranoia, cajoling its members to stock up to stay safe during a time of societal change. “Concerns for personal safety, new limitations on the arrests of criminals in some cities, and potential gun control enacted under the guise of fighting the pandemic have Americans preparing to take responsibility for their own safety,” reads one recent article on the NRA’s website, titled “The 2A is a Constant in Times of Crisis.” On Saturday, the NRA tweeted out a video of a disabled woman arguing for the importance of guns in a time of crisis and accusing Democrats of exploiting the pandemic for political purposes. “I know from history how quickly society breaks down during the crisis,” she says in the video, “and we’ve never faced anything like this before and never is a Second Amendment more important than during public unrest.”

Americans are flocking to gun stores because they know the only reliable self-defense during a crisis is the #2A.

Carletta Whiting, who’s disabled & vulnerable to #coronavirus, asks Dems trying to exploit the pandemic: Why do you want to leave people like me defenseless? pic.twitter.com/wDeEYHqzOU

That the NRA would be exploiting the coronavirus crisis to push their agenda is hardly surprising to Kris Brown, the president of the gun control group Brady: United Against Gun Violence. “One of the things that they know is that the powerful force in selling guns is fear,” she says. “If you didn’t know that this is a virus transmitted between people who don’t know that they’re infected and you saw the NRA’s ads, you would think that we were in a World War.”

For David Chipman, a senior policy advisor at Giffords, the gun control group co-founded by former Arizona Rep. Gabby Giffords, it makes sense that the NRA and the gun industry would use the pandemic crisis to their advantage. “This is a critical opportunity for them to rebound to the highs they saw in 2016 leading up to the presidential election that year, from the lows that they saw last year,” he says. Ever since the NRA spent an unprecedented amount of money to help elect Donald Trump, the nation’s oldest gun rights organization has been spiraling out of control, thanks to infighting within the organization, financial woes, and several scandals involving its leadership. And the internal chaos has led to several public defeats when gun control has become a part of political campaigns, most notably in its own backyard of Virginia, where, in November, Democrats won control of the state legislature and passed a slew of gun control bills.

As Chipman sees it, the coronavirus pandemic is the perfect opportunity for the NRA to push its pro-gun message, especially as state governors begin to exercise their crisis-time powers, shutting down all non-essential businesses—including gun stores. “It’s interesting to see the intensity with which they are trying to drive the narrative that guns are an essential product to Americans, like food or access to health care,” he says. In an article the NRA published on Friday, the organization slammed San Jose and Philadelphia for shutting down gun stores as “non-essential” businesses, writing that in a time of crisis “there is no more basic imperative, in good times and bad, than providing for the safety and security of families and loved ones.”

Right now, it’s unclear what’s going into each state politician’s decision to keep gun stores open, or close them. In New Jersey, Gov. Phil Murphy (D) ordered the closure of all non-essential businesses, which includes gun stores, as did the sheriff of Los Angeles. But the Democratic governors of Connecticut and Pennsylvania both declared that gun stores are one of the few “essential” businesses that could remain open while most other stores are ordered closed, earning praise from the NRA. “A lot of these folks are first-time gun owners who are panic-buying are not your traditional gun rights advocates, and it it never occurred to them until two weeks ago to even purchase a gun,” Brown says. “So it may be that these governors don’t want to alienate those folks too. All politics boils down to who’s voting for you.”

A pedestrian pushes a stroller as people wait in line to buy supplies at the Martin B. Retting, Inc. gun store amid coronavirus concerns in Culver City, California. More photos of the week: https://t.co/tMprMNW2Sd 📷 @pfal pic.twitter.com/z0YcMKOfXj

As people of all stripes continue to flock to gun stores, Brown says she empathizes with the “fight or flight instinct” that many people are experiencing right now in this time of crisis. It’s understandable that people who have never thought about purchasing a gun before might be inspired to now, as the coronavirus crisis worsens around the world and many people’s fears aren’t calmed by the Trump administration’s response to the situation. But the NRA’s rhetoric during this time, she feels, is completely motivated by politics. “They do it because they want to sell more guns,” she says. “They don’t care about the impact on people’s psyche. It’s the same sentiment for Chipman. “They’re taking advantage of a situation and certainly putting fuel on the fire,” he adds. “There’s no question about that.”