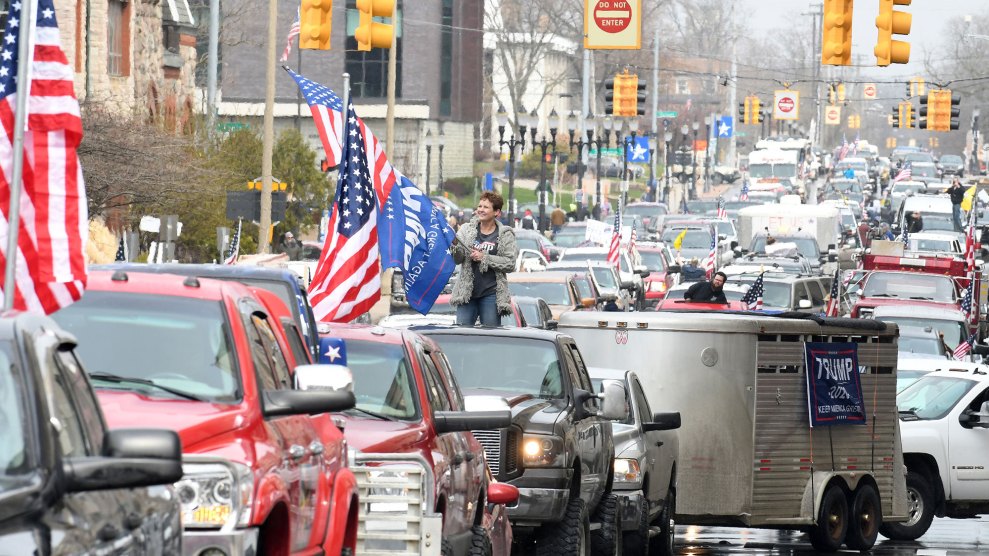 Earlier this week, hundreds of demonstrators blocked the streets of Lansing, Michigan, and defied an executive order from Democratic Gov. Gretchen Whitmer to shelter in place to combat the spread of the coronavirus.

The protest, known as “Operation Gridlock,” featured a fair share of MAGA hats, Trump flags, at least one Confederate flag, chants of “Lock her up!” in reference to Whitmer, and far-right groups from the Proud Boys to the Michigan Liberty Militia. They clogged up the streets outside the state Capitol and defied Whitmer’s ban on public gatherings.

The whole charade was facilitated by the Michigan Conservative Coalition, a conservative political group that doubles as a front for Michigan Trump Republicans, and promoted by the Michigan Freedom Fund, a conservative group with ties to Education Secretary Betsy DeVos, a Michigan billionaire philanthropist power broker before she joined the Trump administration. The Detroit Free Press reported that the fund was listed as one of the protest’s hosts on Facebook. The organization also promoted the event on Facebook.

The rift between Whitmer and the groups over the protest emerged on Monday when Whitmer criticized the Michigan Freedom Fund, saying the nonprofit “is funded in large part by the DeVos family,” and adding that “it’s really inappropriate for a sitting member of the United States president’s Cabinet to be waging political attacks on any governor, but obviously, on me here at home.” Greg McNeilly, chairman and founder of Michigan Freedom Fund and a longtime adviser to the DeVos family, tweeted that Whitmer was “misinformed and disconnected with reality.”

In a Wednesday op-ed for the Detroit News, McNeilly followed Trump’s lead in calling for easing restrictions on social distancing and demanded that Whitmer unveil her plan for re-opening the state. Michigan, mind you, is wrestling with more than 30,000 confirmed cases and 2,227 deaths from the coronavirus, with Detroit at the epicenter.

As Mother Jones reported in 2014, McNeilly served as a longtime political adviser to Dick and Betsy DeVos and a former executive director of the Michigan Republican Party. He managed a campaign against a ballot measure that would’ve enshrined collective bargaining rights in Michigan’s constitution. Here’s how that played out (the DeVos mentioned below is Dick Devos, scion of the Amway fortune and husband of Betsy):

That summer, a group of GOP lawmakers and business leaders—McNeilly won’t say who—asked DeVos and Weiser (who served as finance chairman for the Republican National Committee in 2012) to lead the charge to defeat Proposition 2. They gladly took on the job—DeVos called Prop. 2 “a head-shot at Michigan’s recovery”—but they had bigger things in mind: With McNeilly, who managed the anti-Prop. 2 campaign, DeVos and Weiser sketched out a strategy to defeat the measure, then use the political momentum to pass right-to-work immediately afterward. They also strategized about every other possible obstacle: defending the law from a possible legal challenge, beating a constitutional amendment to repeal it, and protecting Republican lawmakers from recall elections.

They began the anti-Prop. 2 effort in September. Polls showed that 60 percent of voters supported the measure, but DeVos and Weiser tapped their national donor networks, hauling in millions from Las Vegas gambling tycoon Sheldon Adelson, Texas investor Harold Simmons, and a slew of Michigan business groups. Ten DeVos family members pitched in with a combined $2 million. The DeVos-backed campaign ran hundreds of ads in the two months before the vote, claiming the measure would give unions far too much power, cost the state more than $1.6 billion, and imperil student safety by making it impossible to fire negligent teachers.

By Election Day, the two sides had spent a total of $47 million, making it the most expensive ballot measure in Michigan history. Voters defeated Prop. 2 by a 15-point margin. DeVos and Weiser wasted no time moving to the next phase of their plan.

In a series of odd tweets, President Donald Trump called for the liberation of states controlled by Democratic governors in what my colleague Inae Oh described as the “latest signal that social distancing has fully warped into a culture war, one that depicts Democrats as oppressors willing to sabotage the economy and perhaps, in turn, the president’s reelection chances.”