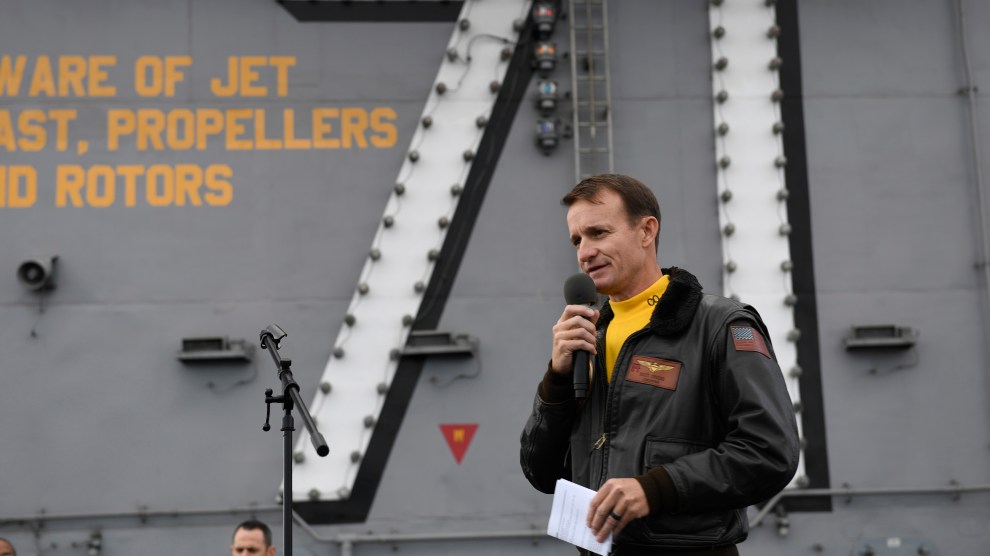 Navy Capt. Brett Crozier addresses the crew of the USS Theodore Roosevelt during an all-hands call in 2019. US Navy Photo by Mass Communication Specialist 3rd Class Nicholas Huynh via AP

Brett E. Crozier, the Navy captain ousted this week after writing a letter to senior military officials about a coronavirus outbreak on the warship USS Theodore Roosevelt, has reportedly tested positive for COVID-19.

His symptoms started before he was removed from the ship, according to a New York Times report, citing two of the captain’s Naval Academy classmates who are close with him. He was being quarantined at the Naval Base Guam, they added.

Crozier was removed from his command over the warship Thursday after his letter was leaked to the media. In the missive, he warned that more than 100 sailors on the ship had been infected, and that they would need to disembark to ensure that the virus did not spread among thousands of others in close quarters onboard. “We are not at war,” he wrote. “Sailors do not need to die.”

The days since have seen a heated back and forth, with sailors and many others, including former Vice President Joe Biden, largely standing in support of Crozier, while the White House and top military brass have doubled down on their decision. “I thought it was terrible, what he did,” President Trump said during a briefing Saturday. “To write a letter? I mean, this isn’t a class in literature. He shouldn’t be talking that way in a letter. He could call and ask and suggest.”

Defense Secretary Mark Esper on Sunday said he supported the Navy’s decision to oust Crozier from his duties. “I think it’s just another example of how we hold leaders accountable for their actions,” Esper bluntly told CNN’s Jake Tapper. The defense secretary said an investigation was now underway, and that was “not unheard of” to fire a commander before an investigation concluded.

CNN’s @JakeTapper presses Defense Sec. Esper on why Capt. Brett Crozier of the USS Theodore Roosevelt was removed from his position before a completed investigation. Crozier was fired after writing a memo saying that crew needed help after the coronavirus hit his ship. #CNNSOTU pic.twitter.com/Oo1vdKdVYI

Esper declined to answer whether he agreed with Trump that it was “terrible” to write a letter pleading for the safety of sailors. “I can’t get too much into the facts of the matter because there is an investigation ongoing. This could ultimately come to my desk,” he told Tapper, adding that it was Navy Secretary Thomas Modly’s decision to fire Crozier. “I think acting Secretary Modly made a very tough decision, a decision that I supported. It was based on his view that he lost faith and confidence in the captain based on his action.”

Modly said he no longer trusted Crozier after the captain sent his letter in an unclassified email system to 20 to 30 people. “In sending it out pretty broadly, he did not take care to ensure that it couldn’t be leaked,” Modly said. “And that’s part of his responsibility.”

According to Esper, more than half the ship’s crew has now been tested for coronavirus. At least 155 of the sailors tested positive. The defense secretary said none of them have required hospitalization.

Meanwhile, on Sunday, Biden said it was “close to criminal the way they’re dealing with this guy.” “I think he should have a commendation rather than be fired,” Biden said on ABC’s This Week.